Portland, Vancouver, Seattle Agree to 500 Away Supporters Tickets for 2011

Share All sharing options for: Portland, Vancouver, Seattle Agree to 500 Away Supporters Tickets for 2011 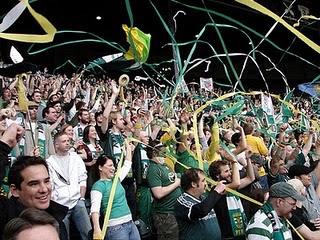 Well, it certainly isn't the 1000 I had hoped for, but it's leaps and bounds better than the 150 MLS requires. Seattle announced last night at the Sounders Alliance End of Year Business Meeting during a QA session that the three Cascadia Cup teams had arranged for 500 tickets to be set aside for each other visiting team despite that the majority of the overall crowd (non SG), players, and coaching staff of Seattle not wanting to allow this many away supporters.

In either case, this is certainly good news for those of us who consider ourselves hardcore fans and who would gladly drive 3-5 hours to see our team compete in a rivals stadium.

No official statement has been released by the Timbers FO about this. I'll update when/if they make an announcement.