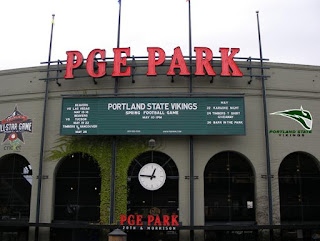 Not that I ever believed we were in the running, but I'd have wanted it to happen regardless.

As of today, we now know the 13 stadiums that have been chosen to host our regional cup championship in 2011, the Gold Cup. You know, that thing where we play Mexico in the finals every other year? Well not really, but it's happened enough times in the last 15 years to see there's an obvious trend blooming on our region.

Anyway, the stadiums were all chosen for next year's event including four MLS stadiums in: Home Depot Center, Red Bull Arena, Sporting KC Stadium (as yet built), and RFK stadium. The first three are understadnable. As far as American soccer specific stadiums go they are, by far, the best we have to offer at the moment (PGE not included). RFK, however, remains a mystery. Why anybody would want to use a decrepit stadium like that is beyond me.

Still, one has to wonder why the northwest was avoided altogether. Surely between us and... Seattle... they could have slotted a match or two up here. Especially given that four sites that were selected don't even have professional soccer teams to call their own. It almost seems like we might have been avoided explicitly for reasons unknown...

Or maybe it all comes down to the turf, once again. As many of us already know, PGE will not be home to a fresh grass turf next season. Instead we'll have the fake stuff, just like Qwest. It's unfortunate that we are forced into a situation like this due to a college football team that, honestly, not many care about in this city.

Not at all an official explanation, but it would make sense as astroturf is almost universally despised amongst players, coaches and general soccer fans the world over. Until we are able to remedy the situation Portland can probably forget about getting any big name soccer events in the city. Bummer.

Here's the full list of stadiums included in the 2011 Gold Cup: