Where Did This Benny Feilhaber Rumor Come From? And Other Thoughts

Share All sharing options for: Where Did This Benny Feilhaber Rumor Come From? And Other Thoughts 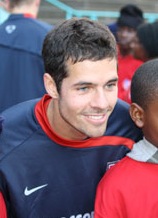 Alright, I've searched high and low, on the BigSoccer forums, in the MLS subreddit, and on the ever venerable SoccerCityUSA forums (the home for many Portland Timbers fans) and I can't find any reputable source that even mention him as a potential player for the Timbers. Did I completely miss something?

Here's what I do know: the Timbers FO traded Dax away because they've already lined up a CM overseas, or are at least negotiating. Supposedly this player is a South American player and, presumably, fairly young as the Timbers seem to prefer younger players to older, veteran players (not that I'm complaining). This is the only place where I guess I can see where the rumor is coming from except for a teeny, tiny detail... Benny Feilhaber isn't really South American.

Yes, it is true that Benny was born in South America, nobody can doubt that. However, at the ripe old age of 6, Benny and his family moved to New York. Benny might be South American by birth, but for all intents and purposes Benny is as American as apple pie (is that the saying?). My guess is that whoever the Timbers are actively courting is an actual South American, as in somebody who has lived most of their life in South America and maintains strong cultural and emotional ties with their native country. It just makes more sense that way.

But all this is really beside the point. Would Benny coming to Porltand even make any sense? I love Benny, he's a nat and I'll love him til the day I die for choosing to play for our nation, his adopted home, instead of Brazil, but I'd be remiss if I didn't have my doubts about him becoming a DP for our squad.

Did I just say DP? Absolutely. While the Timbers haven't used the word outright, I'd say it's a forgone conclusion that whoever they're targeting is being brought over as a DP.

Anyway, my reasons for doubting Benny as a DP is because I'm honestly not sure he's worth that kind of money. Benny is a good player, but he's not playing in a top league. Now you may argue semantics, but if we're going to spend even $500,000/year on a player I want him to be a proven entity within our ranks. DP is a word that should carry weight. This should be the player that everybody else looks to to help build and lead the team. That player should come into our organization with the knowledge and skill to play in the best leagues in the world. While Benny might get there someday I'm doubtful he's there right now.

Of course, that's not to say I wouldn't accept him as a non DP, but I just don't believe he'd be willing to play for that kind of money, unfortunately.

As for who we might actually be getting? I have no idea. Seriously, I could pull names out of my ass all night long but they'd be no better than what you could come up with. The Timbers FO is remaining extremely tight lipped about this situation and we, unfortunately, won't know until mid-January at the earliest.