Getting to Know Kenny Cooper, Our Newest Striker

Share All sharing options for: Getting to Know Kenny Cooper, Our Newest Striker 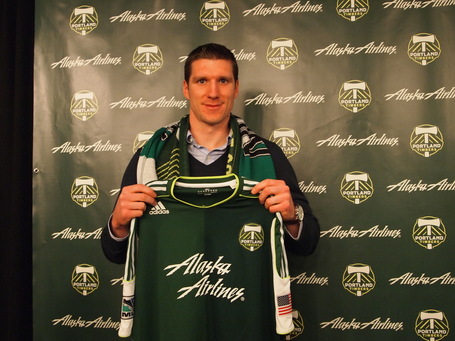 Yesterday, as you may well know by all the media being blasted on the front page, was the day that our new star striker, Kenny Cooper, was officially unveiled in front of a few dozen fans and the press. It was exciting to finally see Kenny in person. In fact, one word really describes my first impression with Kenny Cooper: humble.

That's not to say it was a humbling experience meeting and speaking with him, quite the contrary, from Kenny I get that he's a very humble guy who isn't out here trying to just make money, or become a huge star. He struck me as a player who just wants to play, score some goals and help others score some goals. In my opinion this is a very good thing. I'm not a fan of over-inflated egos and I'm one who tends to think that those types can eventually produce a negative impact on the team.

Of course, acquiring Cooper in the first place turned out to be a rather odd adventure. During the Q&A discussions it was unveiled to us that he had been a target for Portland very early on and that MLS had actually brought the idea to the Timbers FO in the beginning as a potential marquee signing. However, shortly after MLS withdrew their suggestion based on the fact that he would be too difficult to acquire from 1860 Munich. Luckily for us, the Timbers and, more specifically Gavin Wilkinson, didn't give up and kept trying to make the deal happen. So when Cooper scores his first goal for us this season, remember to thank Wilkinson.

And then came the question that was on everybody's mind, at least in terms of Cooper's European career: did he regret leaving MLS for a couple of lackluster, injury-ridden seasons in the Bundesliga 2? To that, Cooper answered with a resounding 'no'. Despite not getting much playing time and not scoring nearly as many goals as he had in 2008, it was obviously a great learning experience for him. Now he is just happy to be back in MLS with a healthy ankle (yes, he's confirmed as being 100%).

Cooper also talked about his pre-existing relationship with Eddie Johnson a bit. Both players are products of Manchester United's youth system and both are about the same age so it comes as no surprise that they'd have at least met before. Cooper had nothing but great things to say about Eddie Johnson and how well he performed back then. It was to the point where I am now thinking that Eddie Johnson could be one of our "dark horse" players this year, creating a real impact for the team. Very exciting! He also mentioned Darlington Nagbe a couple times as well, despite not knowing him personally, he's very excited to train and play with him.

Based on what Cooper has been talking about I'm almost wondering if our formation ends in a 4-3-3 with Nagbe, Cooper, and Johnson up top. Normally I'd have said Jorge Perlaza, but if Johnson is as good as Cooper is suggesting, we may end up having a Colombian substitution. I suppose training and pre-season friendlies will determine the pecking order, however.

Finally, looking a bit more nationally, Cooper stressed that one of his goals is to get back into the USMNT picture. This shouldn't come as a surprise to anybody. Typically, for most players, it's an honor to play for the national team. Kenny Cooper appears to be no different as his previous caps were a "highlight of [his] career." This kind of motivation can only mean good things for our team this year. Obviously, in order tog et on Bob Bradley's radar, Cooper will really have to give it his all and be one of the top strikers in the league if hew hopes to make the national team. If he plays well enough he might make it in time for the Concacaf Gold Cup this summer.

Overwhelmingly, I came away from the media event impressed with both Cooper's professionalism and confidence. He's a humble player who doesn't mind not being the direct striker and would certainly enjoy being a feeder if Spencer feels like that is the best position for him to play (he doesn't, by the way). Coming to Portland obviously means a lot to him and I have a good feeling that he is going to make both the fans and the city proud this year.

P.S. Here are some videos we took of the event. Sound kind of sucks because, well, we don't have a decent mic. Sorry!