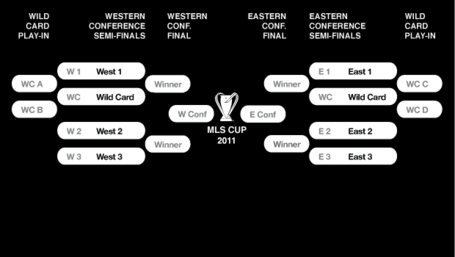 Well we all saw this one coming. It had been hinted at late last year, but the official play-off format wasn't released until about 15 minutes ago. It's not pretty and MLS has amazingly made it so that the play-offs are both less relevant and more convoluted at the same time. It's like they try to do stuff like this!

Ten clubs will qualify for the 2011 MLS Cup Playoffs:

From there the four conference semi-finals (i.e. four teams from Western Conference and four from the Eastern conference) will play each other in a home-away series. The two Conference Champions from there will be decided in a one off game with the higher seed hosting the game at home. As usual, the MLS Cup final will be hosted at a predetermined site to be announced late.

I guess my primary reaction to this new format is one of just plain confusion. Why bother with all this? Why make it more complicated and include more teams from which a Western conference team can, once again, be included in an Eastern conference side, like the previous two seasons? It just makes no sense.

On the bright side, a move like this certainly makes the Supporters' Shield more valuable and, hopefully, more sought after by our leagues' American coaches.