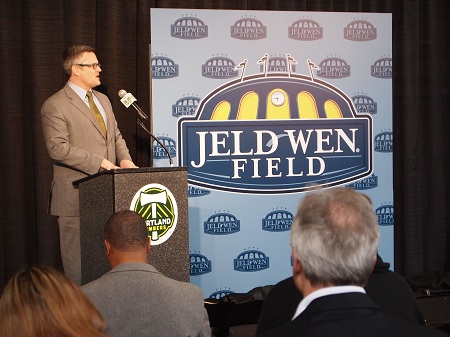 As expected, the Portland Timbers and Portland Mayor Sam Adams today announced that PGE Park is now officially named Jeld-Wen Field after the international window, door, and garage door company Jeld-Wen, which is based in Oregon and employs over 2,500 Oregonians.

In addition to being the stadium sponsor for the Portland Timbers, Jeld-Wen will also become the official window and door providor of the Timbers and Major League Soccer, whatever that means.

From a branding standpoint, partnering with the Timbers and Major League Soccer is an ideal fit for JELD-WEN," remarked JELD-WEN chief marketing officer Steve Wynne. "Naming rights to JELD-WEN Field and marketing partnerships with both the Timbers and Major League Soccer provide support for an historic Oregon icon, grassroots involvement throughout the state, and access to a loyal, international fan base."

Terms like pricing and length of the rights were not disclosed at this event although it's rumored to be somewhere around $1.2-$1.5 million annually.

On the lighter side of the news, we seem to be in the need for a new stadium nickname. Kejsare suggested Jay-Dub, but I'm open to more options. Sound off in the comments!