The Portland Timbers: What needs improvement?

Share All sharing options for: The Portland Timbers: What needs improvement?

We had no possession in the first half, our team looked nervous and lacked composure on the ball. With the lack of both we had no ability to take the pressure off of the defense. The pressure then lead to three defensive mistakes which put the Timbers down. The way the Defense handled the pressure was to immediately put the ball up field looking for Kenny Cooper or Jorge Perlaza. In the second half the possession improved with the addition of Adam Moffat. Moffat allowed the defenders to use him as an outlet and relieved the pressure but by then it was too little to late.

Along with possession comes better ball movement. When I watched the game on TV you could see the speed of the decisions and the ball movement was so slow compared the Rapids. We need to speed up our play and get the ball moving, through this movement we will create more offensive opportunities.

We desperately need two things to happen, Sal Zizzo to get healthy and our the new Midfielder Signing. Either one of those will vastly improve our ability to hold possession and relieve the pressure put on our defense.

Only one free kick was dangerous and that was the one the Timbers scored on. Each of the corners or free kicks we had were not even close to being dangerous. The service needs to be better and we need to put pressure on the other team. If our we are not able to create the offensive chances we have through the regular flow of the game then we need free kicks to be dangerous. The service needs to be better so we can create chances.

Jewsbury needs to put better balls into the box and allow the Timbers to attack the ball and put pressure on the Keeper. Almost every ball was either past the far post or didn't clear the first defender.

Jeremy Hall and Ryan Pore really let us down. Ryan couldn't keep the ball if his life depended on it and Jeremy Hall was not dangerous when he received the ball. Jeremy needs to be more decisive and try to take people on. If he tries to take people on and put himself into a dangerous position we will be a much better team. Too many times he held the ball up and then allowed the defensive to recover.

Ryan Pore needs to have confidence in himself and play like he deserves to be in the MLS. If Ryan can't step up and show he can play at this level he will find he is pulling splinters out of his backside.

The Timbers just need time. Time will allow the chemistry to continue to develop and to be as good as the Colorado Rapids are. Colorado had the same line-up on Saturday as the had in the MLS Cup, that is a huge boost to a team. The Timbers also need some time to allow for Darlington Nagbe, Sal Zizzo and Troy Perkins to get healthy. Think about it, we had three starters out while the Rapids had no starters missing from their Championship line-up! 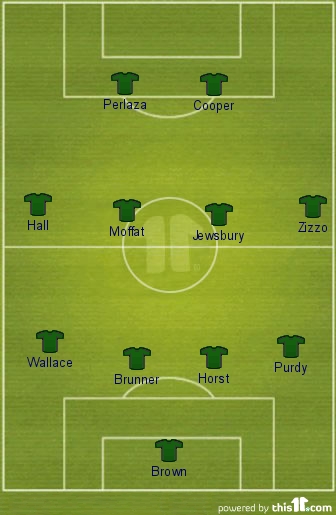