Pressure Not an Issue Leading Up to Portland Timbers' Home Opener

Share All sharing options for: Pressure Not an Issue Leading Up to Portland Timbers' Home Opener 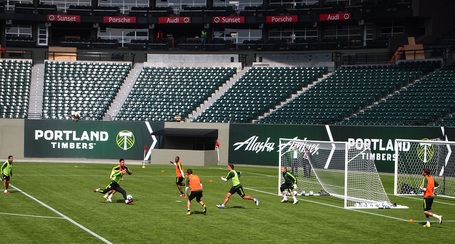 Today was an important day for many of the Portland Timbers players as they trained, for the first time ever, at Jeld-Wen Field. Despite coming off a lackluster start to the season with two losses and a draw, there was renewed hope amongst both the players and fans as the Timbers get ready for their first ever MLS home opener against the Chicago Fire on Thursday, April 14th at 8:00 pm.

But that kind of start to the season mixed with a home opener breeds what many would consider to be an exorbitant amount of pressure which could invariably lead to worsening play, one of the many fears that fans have been pondering leading up to Thursday's big game.

Luckily for the fans, the actual players themselves including head coach John Spencer, aren't feeling the pressure, rather they're feeling the excitement.

"I don't think it is pressure," said head coach John Spencer "I think it is excitement. We spent a lot of money on the field. A lot of players are getting briefed on the fan base we got here and the owner for doing what he has done for the stadium. Now it's time to play. I don't see it as pressure I see it as excitement."

Others, like midfielder and former USL MVP Ryan Pore, have a slightly different but still reassuring take on the presumed pressure that the team has.

"There's always pressure to win in front of your home fans," said Ryan Pore "You go out and get three points, especially at home. We're coming off one point in three games which isn't too good. We're in dire need of 6 points in our next two games against Dallas and Chicago ... [but] there's no better way to do than to go out and do it in front of your fans."

In the end, this is good news for the team. While it's a mistake to believe the Timbers aren't feeling any pressure at all, it's important to differentiate between harmful pressure and excited pressure as the team prepares for an historic game. It appears, from today's training and media briefing that the team is brimming with more of the latter.

Of course, the true test will be in Thursday's game against the Chicago Fire who are fresh off a defeat last week against the Seattle Sounders. Being at home with your fans will only help so much against a team that was undefeated until four days ago. A calm and collected Portland Timbers squad will go a long ways to ensuring that first MLS regular season win.