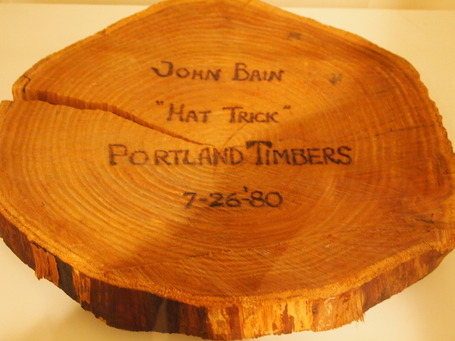 This past Thursday was a momentous day for many of us. It was our first home game since last September, our first home game in newly renovated Jeld-Wen Field, and our first home game as an MLS team. But something else kicked off that day of almost equal importance: the new Timbers-focused exhibit hosted by the Oregon Historical Society and put on by FCMedia. I was lucky enough to attend at the same time as league commissioner Don Garber.

When the Portland Timbers first entered into MLS there were many out there who thought that perhaps our Front Office and MLS as a whole would try to forget about the past iterations of the team, as they seem to do with other clubs that have had a previous existence. We got a new crest, new uniforms and a sparkly renovated stadium. In reality all that has stayed was the name and a few players from last season. Thanks, in part, to Michael Orr of FCMedia, however, MLS won't soon be forgetting where the Portland Timbers came from.

As commissioner Garber walked through the halls of Portland Timbers memorabilia from the 1970s I followed along, listening in on what Michael was saying about the various items collected or donated to this exhibit. What's there is an impressive collection of items. Things you wouldn't expect to see, like a Timbers tambourine or a log slab from 1980 that's still intact and was cut in celebration of John Bain's hat trick. It's an impressive sight...

More pictures after the jump.

I guess the most important part of the trip wasn't even that the league, through the commissioner, was taking note of the history behind this amazing club, rather, it was the realization that we actually have a meaningful history, one that has survived to this day. Sure, each club in MLS has somewhat of a history, but I'd be surprised if there was any club on U.S. or Canadian soil where the club's history plays as much of a fundamental role and guide as the Portland Timbers' history does.

We talk about our history a lot here in Portland, but it's an almost humbling experience to actually see and visit it. What the Oregon Historical Society and FCMedia has done is given we, the fans, the opportunity to see and relive that history again, even if it's only in bite sized chunks of information and memorabilia. The fact that the league commissioner went out of his way to visit such an exhibit is a testament to how much our history means to this club and its fans.

The Portland Timbers exhibit is open now at the Oregon Historical Society until September 4th, 2011. If you're at all interested in seeing where the Portland Timbers came from as well as some very interesting items of the past, I strongly urge you to check it out.