Portland's best XI: Who needs to be on the field?

Share All sharing options for: Portland's best XI: Who needs to be on the field?

Injuries have really forced John Spencer and his staff to make changes to the starting line-up early. Now that those injured players are 100%, or really close to being, Spencer is faced with the task of finding the best XI. So who should be considered for the Timbers best XI?

More after the Jump

The Line up for the last three games was, the only change being Troy Perkins for Gleeson: 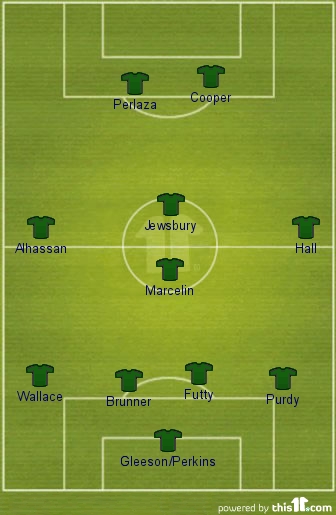 Now those who are available and not starting, besides Perkins, are  Diego Chara, Darlington Nagbe, Sal Zizzo, and David Horst. There are others but I wouldn't consider them as close to breaking into the Best XI as those just listed. I think the two that need to be included no matter what are Nagbe and Chara. Chara because we need that pressure relief valve and in the second half of the Galaxy game he looked so much more composed then any other CM the Timbers have on the roster. Nagbe needs to be out there because he is a threat to blow by defenders and this gives him time on the ball to make the pass to an overlapping player or take the ball inside.

So who does John Spencer take out in order to get Chara and Nagbe into the starting line-up? You can't take Captain Jack out so it has to be Marcelin. However if you want to keep Marcelin in then you need to push Jewsbury back into the CB position but this is not were his skills are best showcased. To get Nagbe in is were the tough decision needs to occur. Do you take out our playmaking mid, Kalif Alhassan, or our unsung hero in Jeremy Hall?
Alhassan and Nagbe's skillset are close to the same as both are fast, attacking midfielders who can create for their teams. Hall on the other hand is more defensive minded then the other two and therefore not as easily replaced by replacing him with Nagbe. So I would have to say Nagbe in for Alhassan. The final question is does Spencer put Horst back in for Futty? I would have to say yes as Horst is less prone to getting sucked out of position.

So the line-up would this: 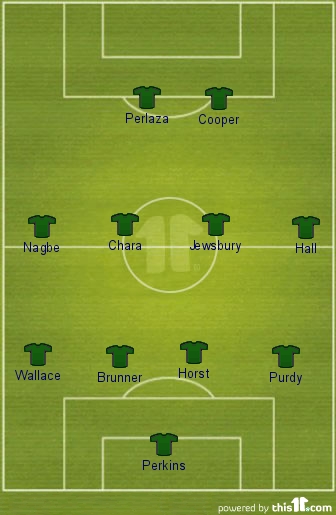 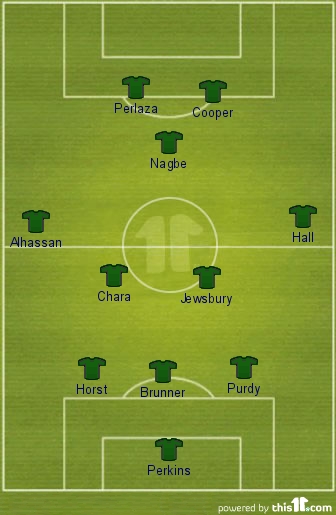 What would your best XI line-up be?