Portland Timbers Get Their Own iOS Game

Share All sharing options for: Portland Timbers Get Their Own iOS Game 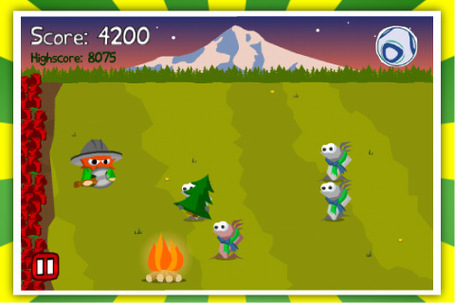 Not one to be late to the party, the Portland Timbers are jumping on the iPhone, iPod Touch, and iPad gaming craze with a new FREE game called Timbers Axe, developed by Blue Carrot Games.

I haven't yet personally played the game (my mostly unused iPod Touch is charging right now and I'm an Android guy for my phone), but I gotta say, this is certainly one of the more interesting ways a club can market itself. Sure, it's not entirely uncommon for companies and even sports teams to create their own apps and games, but I do believe the Portland Timbers are the first MLS team to capitalize on such an idea (correct me if I'm wrong).

The cartoon game features club mascot Timber Joey, who must protect his rose garden from intruders with his axe. "Timbers Axe" has seven increasingly difficult levels and is integrated with the Apple Game Center, allowing friends to compare high scores. "Timbers Axe" was inspired by a similar mobile game and conceptualized by Ronan McCann, a Timbers season ticket holder and father of one of the club’s "We Are Timbers" billboard campaign participants. The game is exclusively available on the iPhone, iPod Touch and iPad.

The game is free, and available right now so if you've got the required devices, now's your time to get a little more interactive with your Timbers love.

P.S. Yes, I'm well aware that the above screenshot seems to have no references or materials referencing the Portland Timbers in anyway, just roll with it.