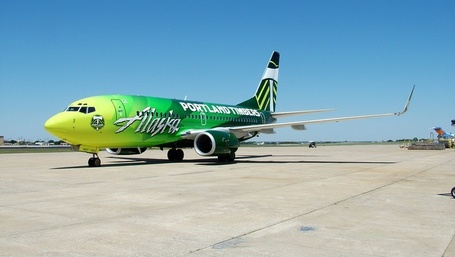 Last December, Alaska Airlines debuted one of their jets with some fairly minor Timbers branding. It was actually a bit of a disappointment considering what Alaska Airlines had done with other teams like the Oregon State University Beavers. Little did we know that day, during the kit unveiling, that said jet wasn't to be our real Portland Timbers branded jet, rather just a place holder until Alaska Airlines, the Porltand Timbers, and a couple lucky fans were able to design one.

Well that day has now come and this morning Alaska Airlines unveiled the jet at PDX. I like most parts of the jet, but some of the front coloring puts me off a little bit. Especially when the dark green begins transitioning to the lighter -- almost Sounders-esque -- green. Still, I'm thrilled that the jet proudly boasts the secondary crest, which has always been my personal preferred.

To celebrate the introduction of the "Timbers Jet," Alaska Airlines will extend early boarding privileges to Portland International Airport passengers wearing an official Timbers jersey throughout the 2011 MLS season.

How cool is that?

No telling on just where this jet will be flying to yet, but wherever it goes it's nice to know the Portland Timbers will be well represented.