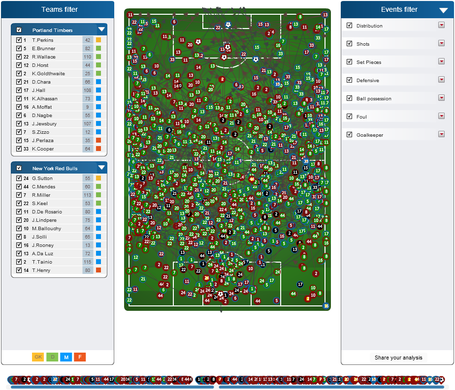 When MLS debuted their new "Project Ramos" site it came with the promise of increased stats and information on an unprecedented level for MLS. And then it actually came and it really didn't look too different from what we had all grown used to. Today, however, MLS has delivered on their promise with a new stats category under each game recap that will not only allow us to better serve you guys with our reviews but also so that you can go in and review the game yourself.

The new feature I'm writing about is called Chalkboard and you can find it, right now, if you go under any past game's recap and select the "Chalkboard" tab. Or you can just check out this link from last Saturday's game against the New York Red Bulls.

The service is powered by Opta (no surprises there) and it covers each individual player, what their movements were, how their distribution was, how many shots they took and from where, etc. At first it's almost a little overwhelming given how much raw data can be displayed through a relatively small app on the site.

Follow me after the jump for some screenshots of the service.

So what you'll see here is the standard app. You've got all players that were ever involved with the match on the left (including subs), a field in the middle, types of gameplay on the right and a timeline of the game at the bottom. 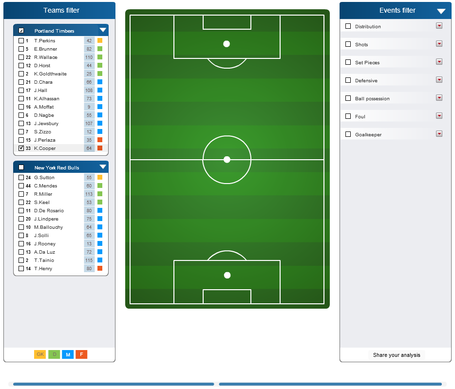 From there if you select one (or more) player(s) on the left and the type of events on the right you'll see where that player was active and what he did. So, for example, I've selected Jack Jewsbury and "ball possession" and this is what is returned: 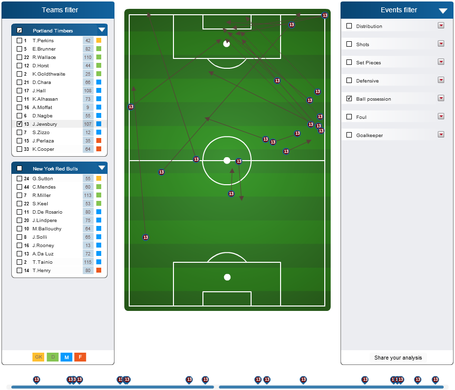 Here you can see the exact positioning of Jack Jewsbury when he had possession of the ball, where he played it off to and, if you look at the timeline on the bottom, what exact minute and second that he took possession of the ball. You can do this for any or all the players involved in the game.

Finally, you can also just hover over the player names on the left hand tide to see exactly what they were involved in and their general placement on the field. For this example I've selected Kenny Cooper. 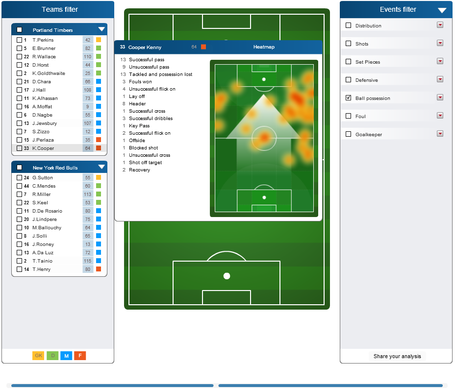 So we can see here that Kenny Cooper had 13 successful passes, 9 unsuccessful passes and 8 headers among other things. We can also see that he strongly favored the right side of the field, but was rarely, if ever in the box at all.

So, that's the new Chalkboard app. You can expect us to include it in match previews and reviews from now on as it's a wonderful tool. I think something like this will only help improve the overall game as fans and pundits alike are able to really decipher what a player was doing after his performance.

I only have a singular suggestion... Can we get one for the referees?