I have been trying to get this written for the past 4 weeks but it seemed every week something came up and I got distracted. Watching the Portland Timbers has been rough the past 7 games but for all the rough spots there has been moments of great soccer from the Timbers. The unfortunate thing is that right after the great soccer, or just before, there have been some ugly and horrid soccer.

To address these issues Coach John Spencer first made line-up changes and when that didn't solve the issue he went to a formation change. The formation change came up with mixed results, great offense but lots of defensive mistakes that made Troy Perkins show us why we traded for him.

So what is going wrong and what did the changes do to formation and tactics?

More after the jump:

First lets look at the 4-4-2 formation employed for all but the last game. In a traditional 4-4-2 the attack has two routes, maybe three but the third is almost always a desperation route, play down the wings or play through the central midfielders. The Timbers use the wings as their attacking route. This means most of the play making responsibilities rest on Darlington Nagbe and Kalif Alhassan. One of the major reasons the attack has been funneled to the wings is the fact that Spencer encourages the outside backs to join in on the attack.

After getting the ball into the final third of the field the outside mids and outside backs are supposed to send in dangerous crosses from the wing to hit our forwards in the box. However the biggest problem with this is the fact that aside from Captain Jack Jewsbury none of our outside players have hit a cross that any of our forwards have been able to get onto. So one of the huge deficiencies in Timbers games when playing a 4-4-2 is the lack of quality service into the box.

In fact most of the quality service into the box comes from set pieces and the aforementioned Captain Jack. Not only is the quality of service an issue but Portland was rarely using the wings as their attacking route. Their route was to either play a long ball from the defensive third looking for Jorge Perlaza or to try and hit our target forward Kenny Cooper.

By playing the long ball or the through ball the Timbers put both players on an island by themselves. Almost setting them up failure by playing the long ball.The reason for the long ball was the fact that all of our midfield, mainly our central mids, were so far away from them because of their defensive duties that they had no where to go with ball and tried to beat 2 or 3 defenders on their own.

For the visual folk during the Sporting KC game I took a couple of pictures so I could show some of the off the ball positions by the players and what I have just discussed.

Here are the 8 pictures I took in a slideshow:

As you can see in the first picture the ball was just played down the right side and due to a lack of options is being swung around the back. However the second picture shows us why the 4-4-2 was not working and the Timbers were playing long balls to our forwards. After swinging the ball the right our Central midfielders retreated back towards the ball and left a huge gaping whole that in the picture is being filled by a goalie and a KC player. So where is Rodney Wallace supposed to play this ball? He really has 3 options: First hit it to Nagbe on the wing and hope that Captain Jack checks to him and plays a wall pass back to Nagbe as he streaks down the wing. Second Play it back to Mamadou Danso and try and probe again. Lastly he can hit a long ball to the corner and try and spring Perlaza.

In the third picture Perkins has the ball and you can see a little bit of the shape the Timbers usually play with. Only the 4 in the back, and Diego Chara if he makes a short run, are in positions to truly receive a pass. The rest of them are setting up for along ball.

Going through the highest level possible for soccer in Oregon I was always taught that Soccer is a game of triangles. If you form a triangle between you and 2 other plays your options are endless. When you stand in a straight line either vertically or horizontally on the field the other team has to do very little work to defend you. Thus try and form a triangle and keep possession.

Look through the rest of the pictures and tell me if you can see any triangles on offense.  This made the Timbers offense really easy to defend and all the other team had to do was pinch the wings and force the long ball. The only good picture of the bunch is the last one where Sal Zizzo kept a very wide position when the ball was on the other side of the field and a switch found him in a dangerous area.

So in order to play a 4-4-2 to get the best possible attack out of it a team needs to use both the central mids and the outside mids as their route of attack. However Jewsbury and Chara were both too defensive minded for them to join the attack early and support the forwards and wings.

So Spencer did something that really helped out our two central midfielders. He put James Marcelin in place of one of the forwards up top. Here is the formation: 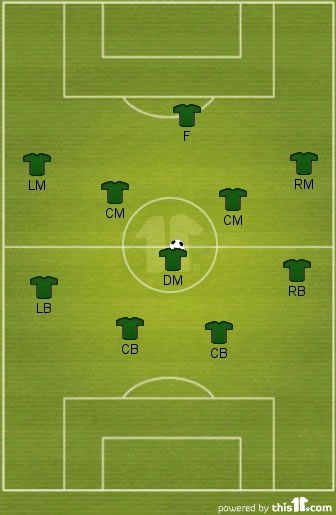 As you can see this really freed up Chara and Jewsbury to be more involved in the attack and led to a more balanced attack both through the center and the wings. The reason for the balanced attack was the fact that Marcelin could play both the wings or the CM's. This made the Timbers less one dimensional and a lot harder to defend and lead to some good goal scoring opportunities.

However the Team defense was still a huge problem.

One of the things Spencer kept talking about in his post Seattle game conference was the fact that the team as a whole needed to be better at defending. The reason for most of the goals was not the fact that our center backs were having a bad game but the combination of our midfielders allowing Seattle too much space in the midfield and not communicating with their defense when they let a runner go.

On defense, especially since the modern game has gone away from man marking to the zonal marking, there is a constant taking on of defensive responsibility and the letting go of it. Watching the Seattle game it seemed as if no one was communicating nor trying to deny Seattle time on the ball which allowed them to pick and choose where they wanted to place the ball. In order to be successful in a 4-1-4-1 or in essence a 4-5-1 the 5 midfield players need to suffocate the oppositions and plat a pressing style of defense.

I don't know if it was the newness of the formation or just a huge breakdown in team defense but a defensive 4-5-1 should never give up 3 goals, especially when out numbering the opponents in the center of the pitch.

So in order to get their first win on the road Portland needs to play a pressing style of defense in the middle third if playing the 4-5-1 and use the space given to Chara and Jewsbury to feed both Alhassan and Nagbe on the wings. Oh and pray to the soccer gods or sacrifice something cause they are not happy with the Timbers.

PS I really hope this makes sense. It was really hard to try and put into words all the things going on in my head as to what is breaking down for the Timbers.