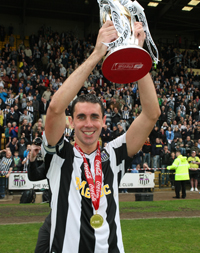 No big surprises here, but, in case any of you were wondering, defenders seem to be a priority heading into the transfer window next Friday. We already knew about one defender who was on trial with the Portland Timbers, that player being Aleksander Ignjatovic. There was also a rumor going around that Chilean defender Boris Gonzalez was being considered by the Timbers. Today, a new trialist appeared at practice, an Irish international player by the name of John Thompson, who most recently played for English League 1 side Notts County.

Looking back at the last few games, it's certainly understandable why the Timbers FO would be so interested in bringing on a few quality defenders. In the last five games, since the begnning of June, the Timbers backline has allowed 11 goals into the net without a single win. The Timbers also have the second worst goal differential in the league with -9 (that means they've allowed in 9 more goals into their net than they've scored). Only Toronto FC has a worse goal differential at -12.

So, obviously, something is missing from the backend. Mamadou "Futty" Danso has served amiably enough, but perhaps Eric Brunner needs a more experienced top level defender to guide him.

The new trialist this week is John Thompson, as I already mentioned. I'm still digging around for stats, but it looks like the Irishman has spent the last few years (since 08) with Notts County of the English League 1, although it looks like they may have played in League 2 (the fourth division) for all of those years.

As present it's a little difficult to judge whether or not Thomson is a sound player as it's a little more difficult to quantify defenders than it is strikers or goalkeepers. I'm also not going to downplay him due to his experience playing in a fourth division, a division most MLS fans would incorrectly say is beneath MLS.Remember, Luke Rodgers (one of New York Red Bulls best strikers this year) also came from Notts County of League 2.

I guess with only a few more days to go, we should see how everybody pans out.