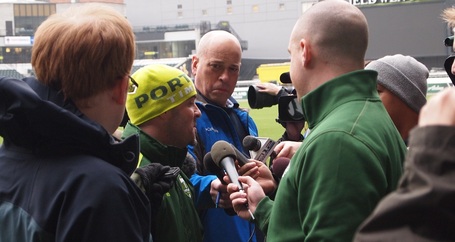 Anyway, today's Quotes and Notes edition might be a tad shorter than usual. As some of you might know by following our Twitter account, we were all sequestered in the bowels of Jeld-Wen throughout much of the training because the training staff preferred we not be there for the initial training session. As such, we didn't see much of the players who were training.

But here is what we do know:

The only two regular members of the Timbers not there today was Sal Zizzo and David Horst, the latter for the obvious reason of having recent surgery.

Additionally, there were a couple trialists in Franck Songo'o, who played for the 2010 Camaroon World Cup qualifying squad and Joe Bendik from Georgia. Again we didn't really get a chance to see either, but today was mostly about fitness anyways.

Songo'o in particular, a winger, has an interesting career history. He played in his youth for Barcelona's youth squad from 2002-2005. He was then sold to Portsmouth of the EPL where he only actually appeared three times but was loaned out quite a bit. He most recently played for Albacete Balompie of the Spanish second division league. No idea how well he'll fit in here...

As for Joe Bendik, a native of Georgia (the state), he's been most recently plying his trade in Norway for the club Sogndal. he's only made 9 total appearances but then he's a goalkeeper so unless he was their first keeper we wouldn't expect to see him often. No doubt he's being considered for the 3rd keeper position here.

On getting the team back in training

Well it's always good to get the guys back. It a great group of guys that I like being around personally as well as professionally. So with that and some new additions, and they're going to be good additions to the group that's already happened.

On expectations heading into the 2012 season

I think we had a good first season and I think it would have been a great first season had we made the play offs. So we were four or five points short of having a great first year. Sometimes in life it's best not to get too much too soon ... We're looking ahead to try and be better than we were last year and try and go win a championship, not just to make play offs, we've got to try and aim to win a championship.

On feeling pressure for the upcoming season

On the off season moves of the club and new players

Yeah they're exciting! Quite a few of them we haven't seen play yet, but I know the coaching staff that we have and that they've done their due diligence in finding them. It's going to be an exciting year. I think we've set our goals even higher this year obviously. At the end of everything we want to be in the play offs and fighting for everything.

On how hard it is to adjust to a new group

For me I'm used to it. It's kind of the nature of the beast. I know Kenny had to leave and a lot of us were his friends but it's part of what we do and I think the guys realize that. So it's time we move on we've got some key players that we're adding to the team that can hopefully be good for us this year.

On strengths and weaknesses of the team this year

I think toward the latter part of the season we really came into our own defensively as a group we came pretty tough to score against which is key especially on the road. You gotta keep things at 0 ... Defensively we're solid. Now it's just about getting more guys forward and scoring more goals.

On new strikers coming into the team

We haven't played together yet, but I'm sure John Spencer chose them for a reason. I thin they'll fit in right off the bat, everybody will push each other.

On training during the off season

I just went back to Ohio and did some conditioning and running while training with Akron in early January where I just trained with them all day.

On being more comfortable in MLS after a year of playing

Yeah I feel a lot more comfortable now. The first year of anything you're a little nervous. The second year you're more relaxed and you know what to expect and I'm just looking forward to it.

On specific goals for the season

Get more goals and assists to do mroe damage in the attack.

I was very excited that I got picked at #8. My expectations haven't changed no matter what team I went to so I just want to come here and work hard.

On personal goals for the 2012 season

I want to overcome and excel [this year] ... First things first is the chemistry of my team. The chemistry carries a long way if you want a championships so I'm starting to bond with these guys ... I'm loving it so far.

There's much more, particularly from our newest Colombian arrivals but Andy will tackle that in an entirely separate article since it's kind of a unique angle. We're aiming to get back to another training sessions this week and get some face time with more players as well as Gavin Wilkinson so stay tuned for that.