Portland Timbers Training Quotes and Notes: the Calm Before the Boyd

Share All sharing options for: Portland Timbers Training Quotes and Notes: the Calm Before the Boyd 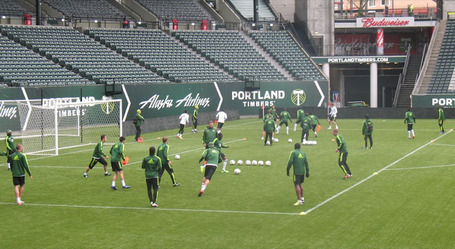 Training today was definitely for mature audiences only, with Coach John Spencer throwing around some eff bombs during the session and talking a little dirty afterward as well. Spencer was unsurprisingly stressing fitness once again, as every man on the roster with the exception of Kris Boyd was on the pitch today (even Jose Adolfo Valencia, briefly), each of them moving constantly for the full two hours.

Darlington Nagbe, Sal Zizzo and Lovel Palmer were moving for the full two hours just like their teammates, although they did not participate in the main training activities. Instead they jogged around the field, getting their various ailments worked out. David Horst was also on the field but from this observer's perspective did not appear to be as far along as the others. Nagbe additionally worked on his sprinting but the coaches were careful not to have him turning sharply on his ankle, while Zizzo spent some time working with the ball and moving side to side.

The rest of the team participated in small-area keep-away and some drills focusing on one-on-one dribbling/defense, which was entertaining to watch. Jorge Perlaza definitely excels at the one-on-one dribbling, while Jack Jewsbury is extremely difficult to get past. But the main event for Merritt Paulson and the rest of us was the 11v11 scrimmage. More on that plus quotes from John Spencer and Mike Chabala after the jump.

The teams in the 11v11 were pretty evenly split, with a mix of established starters and folks challenging for starting roles on each side. Kalif Alhassan initiated the scoring for the yellow pinafores, breaking into the middle past Chabala from the right flank and slotting a roller to the far side of Joe Bendik.

Rodney Wallace, playing as a midfielder for the yellows, followed quickly with a goal of his own. A little bit after that Kalif found Brent Richards on a perfect through ball behind the blue pinny defense, which Richards finished easily past Troy Perkins. Alhassan had a part in each one of the yellow team's goals and looked comfortable and confident as the playmaker.

Diego Chara finally got the blues on the board, running free from his right flank towards the middle. Jorge Perlaza made an overlapping run to Chara's right, drawing the defense away from Bright Dike, whose first touch on the ball was almost too heavy, but he managed to catch up with it and drill it home. That was the last goal for either side, as both teams looked pretty exhausted.

A few more observations ... Joe Bendik is big, vocal, made some excellent reaction saves, and stuck his face right in the path of Dike's boot on several occasions. The guy's fearless and looks fully capable of taking on the goalkeeping duties should they be required.

Also, for those keeping track of the Timbers' fullback positions, the corners were manned by Chris Taylor (LB) and Steve Purdy (RB) on the yellow team, Mike Chabala (LB) and Andrew Jean-Baptiste (RB) on the blue team. Chris Taylor looks confident on the left and did well getting forward, working together with Wallace.

What can you say about the team's readiness right now for the start of the season?

Guys are still not fit enough. So they'll have two and a half three weeks to get there. Got a couple of good games coming up in the next week or so, and a good tournament here, so you know, we'll start to get nearer to the starting XI for the Philadelphia game. And there are places up for grabs for people. Some good performances inconsistently. You know some guys play well and then are off for three or four days -- that's not gonna get them on the team. Your place is on the line if you don't perform near the start of the season. I try to emphasize to the guys that you got to be ready to play every day.

How much are you itching to get the season going?

Yeah, looking forward to it. You know, you play so many preseason games. I think it'll give us a good taste, a good appetite when we play this Jeld Wen Tournament here, with the teams that are coming in and the fans here watching the tournament. So that always whets your appetite for what's to come. But there's nothing better than opening night here. This place will be jumping and we're all looking forward to it.

What's the most important thing you'll be working on the next three weeks?

What makes Jack Jewsbury different from other good captains.

Every captain's different, you know you get some guys who are rah rah type of guys and shout and scream in the locker room. I think Jack just leads by example with his professionalism off the field. Really really good family man, comes into training every day on time, just shows a good, good professional mentality. And I think that's something the young guys should definitely learn from.

How do you judge a player's fitness?

Well you see obviously the guys during the training, just the look on their faces. How heavy they're breathing. They're better than expected for this time of year, three weeks out. We're getting there.

Have you seen the new billboard on Southwest Broadway and Burnside?

Yeah, I've seen it, yeah. Merritt sent me an email picture of it. I know some people said it was a life size picture of me, in terms of the size of the head. I haven't actually seen it in real life. I wake up every morning and brush my teeth and look in the mirror, I don't think I see a 30-foot man, a 60-foot man. I tell you, this is the one time I want them to photoshop, take some wrinkles and baggy eyes out, so maybe I look better on the poster.

Yeah, I've heard that before...

The interview got a little out of hand after that, but he did offer some advice for dealing with jet lag -- just to stay up extra late the last couple of nights in Scotland -- saying it shouldn't be a problem for Kris Boyd. He also mentioned that Nagbe is dealing with a slight ankle strain, and they're working carefully to get him back into shape.

On the team's performance in preseason matches in California.

The games in Los Angeles, you saw a different lineups, different groups, but a lot of good play. I think you saw the attacking style that John has tried to emphasize on the team. The athleticism and the ability to get up and down the field. And the quick transition. Franck's a good pickup, he's great going forward. Guys like Rodney, guys like Kalif, you know, we have a lot of talented players out there, so it's our job to make sure we get that ball in transition and try to take advantage of the other team.

On Spencer's focus on fitness.

That's part of the game. Like coach stresses, you know it's part of the modern game. I'll be honest -- this is the toughest preseason I've ever been a part of, and that's going on seven years of being a pro. So that's good. The standard has picked up and there's a high expectation for everyone on this club, from the top guy all the way to the bottom, so we'll be an exciting group, and it'll be exciting to finish up the next couple of weeks before we get going.

On Boyd joining the squad tomorrow.

He's gonna get a lot of schtick for taking a few days off. I'm just joking. He'll have a big welcoming party I'm sure there will be a lot of high fiving, just a big welcome. I think everyone's just looking forward to him coming in and getting situated, acclimated right away, and hopefully contributing. That's the main focus. I think anyone in the locker room will say they want the best guys on the field, to get the job done.

Who has had a great camp in your eyes?

Franck probably, by far, for me he's so good on the ball going forward, he's so comfortable, he put a lot of dangerous balls in the box and got himself forward. I think he's a very explosive and dynamic player, comes inside comes outside. He's dangerous. He wants the ball.

Darlington, too, when he played. I'll say it again, I think he's one of the most gifted players I've ever played with. I think as he grows up, he's a player to watch out for.