Share All sharing options for: 4-5-1: Options for a Deeper Portland Timbers Roster

Ryan wrote yesterday about the formation likely to be the most common in 2012, based on John Spencer's almost exclusive use of the 4-4-2 in 2011. It's true, Spencer likes the direct approach to the attack, a strategy that uses lots of speed and doesn't require much in the way of possession.

But part of me wonders if Spencer felt limited in choosing his formation because of a lack of depth on the bench. There were a couple of times last season when Spenny did trade out an attacker and bring in James Marcelin late in the match in order to help out the defense, or send Futty Danso forward to attack late in the RSL match, but other than that he didn't appear to feel confident enough in his bench options to try a different formation.

2012 may prove to be different on that front. If Kris Boyd pans out as the goal scorer the front office has promised, Spencer may feel comfortable using him as a lone striker, an option which neither Perlaza nor Cooper seemed suited for in 2011. If his defense proves stronger than last year, he may have more options in the midfield. In short, with the deeper bench Spencer will have at his disposal, especially once David Horst and Sal Zizzo are healthy, I don't think the 4-4-2 is necessarily a foregone conclusion for the entire season from beginning to end.

In fact, with the unbalanced schedule, it may indeed behoove Spencer to switch up his formation just to give Western Conference opposition a different look the second or third time they see the Timbers.

After the jump we'll take a look at a couple of iterations of the 4-5-1, one a more defensive posture, and another built for the attack.

First, the defensive 4-5-1, or something like a 4-2-3-1. The formation illustrated below is not one I would expect to see at the start of a match, rather something I can see Spencer switching to for the last 15 or 20 minutes in order to preserve a 1 goal lead. Also, I should mention here that I am leaving Chabala and Palmer in the back four for these illustrations, even though I am quite confident Spencer will not be starting the season with that defensive setup. We'll get to that level of speculation soon enough. 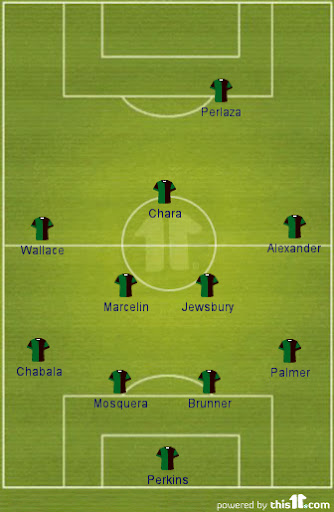 In the above formation Boyd has been subbed out for Marcelin, while Kalif Alhassan has been removed in favor of Rodney Wallace, and Darlington Nagbe for Eric Alexander. Defensively, Marcelin and Jack Jewsbury clog the middle and force the opposition's attack out wide, while the speed of Jorge Perlaza and Wallace keep the opposition's defense honest and out of the attack. This setup demands a little more from the fullbacks, but not much more, as Wallace, Diego Chara, and Eric Alexander are available for support on the wings. The center of the pitch is filled with four of the tallest Timbers, some of the best in the MLS on 50/50s.

The 4-2-3-1 isn't great offensively, but offense is not it's purpose. It relies mainly on the counter-attack and hopes that a good clearance from the defense is able to spring Perlaza for a run down the pitch, while Wallace races in for either a centering cross or a rebound off a Perlaza shot. Well, hope is the wrong word. This formation really only threatens this counter-attack and thus leaves three or four of the opposition's defenders out of the attacking third.

The defensive 4-5-1 is boring, though. It's for killing time. It's all about unsung heroes. Screw that. 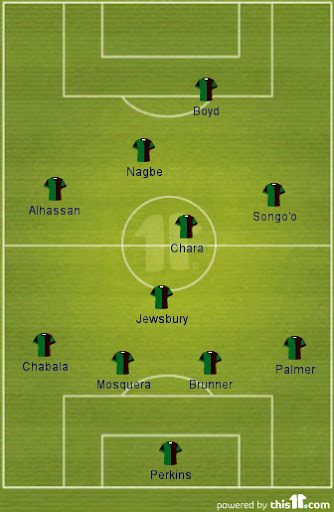 A lot of the comments yesterday seemed to be begging for this lineup, the 4-1-4-1. And for good reason. If the Timbers defense proves staunch enough, and if Boyd proves dangerous enough, the above formation may become quite common. It surrounds Boyd up top with the Timbers' best playmakers, assuming Nagbe, Alhassan and Songo'o can establish themselves as such. It puts more emphasis on controlling possession in the attacking third, with Chara working with Lovel Palmer (or yet to be named RB) and Franck Songo'o on the right side, Nagbe, Mike Chabala and Alhassan on the left, Jewsbury and Hanyer Mosquera backing up the middle.

This formation hopes to wear out and break down the opposing defense, allowing the Timbers attack to wait until the right moment to feed Boyd for the kill.

Defensively, this formation is less strong. Much is demanded of the entire back four, and they would constantly have their hands full if their teammates proved ineffective at controlling possession. With the addition of Mosquera the Timbers should be more capable in the face of an opposing counter-attack, but too many of those would wear down the defense and limit Spencer's substitution options late in the match. But if the Timbers can do enough damage early on they can revert to a more defensive posture down the stretch, as long as they continue to dominate possession.

There are a lot of big ifs in the 4-1-4-1, which is why it's unlikely to be the starting formation on 3/12. But if the pieces Gavin Wilkinson has brought in during the offseason are as good as their billing, and if our returnees have truly improved and matured, I have a feeling we may see this formation every once in a while, especially against Western Conference teams.

Thoughts about the 4-5-1? Are there other iterations of the 4-5-1 where the Timbers might be especially strong? Am I just way off in my analysis here?