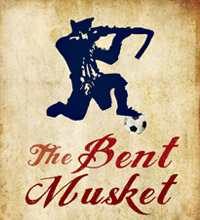 New week, new preview material for you to read. Before we begin, if you haven't noticed, we're jumping on this week's preview material a little earlier than usual. This is something we are planning on doing more frequently (especially with these week long breaks) so as to allow you guys to digest the material better rather than cramming 3-4 articles at you within a couple days. The plan will always be to introduce the interview on Wednesday (for a Saturday game) followed by additional preview material for each day of the week leading up to the game.

Anyway, this week I sat down with Steve Stoehr of The Bent Musket (SB Nation's New England Revolution blog) to find out what New England was up to during the off season and what we can expect heading to Boston (-ish) this weekend. Here are his answers!

P.S. If you're interested in my answers to his questions check out his blog later this week!

Before we begin with the match preview, can you explain a bit about what New England has done during the off season and what's different between this year and last?

Where do I start? There's been so much change.

First of all, biggest change, no more Steve Nicol. He's one of the winningest coaches in MLS history, but all things must end and it was definitely time to part ways, for both parties.

The team brought in Jay Heaps to fill the void, and also restructured the front office The team now has a dedicated President and a General Manager, whereas before it was more amorphous, with a COO, a "VP of Player Personnel" and Sunil Gulati acting as President, but never really doing anything anyone was sure of. At least from the fans' perspective.

So with that taken care of, Heaps came right in and hired the team's first ever strength & conditioning coach, lobbied (successfully) for an independent fitness center and video center for the Revs, and basically changed the culture from word go Only 15 players have returned from last season's roster, and 1-28 still has yet to be finalized.

So that's all the change we're looking at, cliff notes version.

Wow. I didn't even know about Sunil Gulati. But looking at the big man running things, Jay Heaps, what have you seen in his tactics thus far that differ from Steve Nicols?

He definitely favors attacking, and wants the team to pass and move. Nicol was more of a route-one guy who stressed defense.

The Revs haven't exactly pulled off Heaps' tactics to perfection, yet, but you can already tell that he doesn't have the same philosophy as Stevie.

So the Revolution looks to have had a great pre-season (3-1-0) followed by a poor start to the season (0-2-0) with no goals yet scored. What does this say about the current team and how will they turn things around against Portland?

Ah, my numbers were only for the pre-season tournament.

It says that the team has yet to gel, but that much was obvious Four of those preseason matches were against MLS opposition, but LA, NY, and RSL have established cores that don't need time to build chemistry, so in some of those games the Revs saw a lot of reserves and trialists, and were able to take them to task. No one expected it to be easy in the regular season, and I think you're seeing some of that now. This team is young, trying to find its feet in a new system, and still hasn't fielded it's best XI in a match yet.

Against Portland, I don't know if they can turn it around. An injury crisis in defense is going to leave Jay Heaps with some killer selection headaches, and he might have to consider a total change in formation.

So speaking of the starting XI, who should Timbers fans be keeping an eye on Saturday? Who are the play makers?

Well, Shalrie Joseph and Benny Feilhaber, of course. Those two go without saying However, watch out for Lee Nguyen. He made a bright cameo appearance against San Jose and earned the start against SKC, and let me tell you, he was one of the brightest spots on the field. If plays will be made, they will be made by Joseph, Feilhaber, or Nguyen.

And finally what's your predicted starting line up?

Ok, I'm going to give you two starting XIs the big question is whether or not Heaps slots a guy into central defense who doesn't play there, or if he goes with a 3-man back line. Both plans present grave risks.

However, if they run a 3-man backline I would expect to see Alston, Lechner, and Soares in the back, the same 5-man midfield, with Fernando Cardenas partnering Sene up top. A further wrinkle: If Florian Lechner's visa doesn't clear by this weekend, all bets are off, and I can't even begin to predict what will happen.

Once again, huge thanks to Steve over at The Bent Musket for taking time out of his day to answer our questions!