Share All sharing options for: Stumptown Showdown: Mosquera vs Keane

The Portland Timbers take on the LA Galaxy this Saturday at the Home Depot Center, looking to stop their losing streak at three games. In order to do so they will need to improve their game in many areas over the previous weeks.

The Timbers will have the benefit of matching up against one of the worst defenses in MLS right now, a team that has given up more goals per match than any other US-based team.

In the absence of a leader at the back, the Galaxy plays a tentative defensive game, routinely losing track of their marks and giving space to creative attackers. Darlington Nagbe and Kris Boyd will undoubtedly be able to create more opportunities than they have in the past four weeks.

But none of that will make any difference if Portland center back Hanyer Mosquera, expected to return from injury this Saturday, isn't able to contain the Galaxy frontman, Robbie Keane.

After the jump we'll dig into the challenge the Timbers are up against in Keane, what it will take to disarm him, and what strengths Mosquera has to accomplish that.

Soccer fans got awfully tired of hearing all about the facial expression Keane's eyes were pulling for the first month of the 2012 season (note: they were apparently smiling -- brightly, even, depending on who was describing them). Obscure song references aside, Keane scored three goals in his team's first three league competitions, contributing 18 shots, 9 on target. His goals account for 60% of his team's total production so far in 2012.

Yes, he has quite a bit of gray streaking through his hair, but Keane's combination of physical strength, ball control and opportunism still makes him one of the most dangerous strikers in the league with the ball at his feet. His 15 years as a professional has endowed him with a sense of the pitch that few defenders can match.

Keane can be downright terrifying on good days, but he routinely creates havoc even on days when he doesn't score. The image below, Keane's Heatmap from March 18, sourced from MLSSoccer.com's chalkboard application, shows what Keane did in the Galaxy's only win of the season, a 3-1 result against D.C. United. 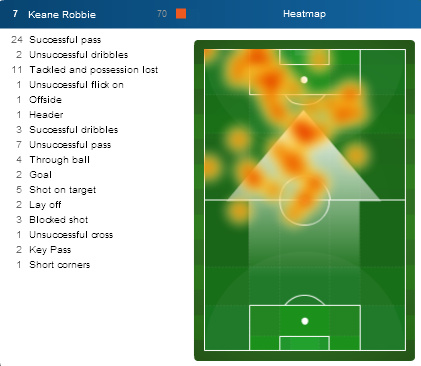 His most active areas during that contest were in the center of the attacking half and the left side of the penalty area. Yes, he scored two goals in this one, but his Heatmaps from the Galaxy's losses to Real Salt Lake and New England Revolution, as well as their draw against Toronto FC in the CCL, are very similar, showing most of the color in exactly the same areas.

When facing a player of Keane's quality, many MLS defenders have chosen to stand back and try to block the shots while giving themselves space to react to his movement on the ball. The Timbers defense has employed such a strategy as well at times, reluctant to challenge for the ball out of fear that the attacker might win the challenge and have a free look at goal. And to be fair, Keane certainly has the ability to shrug off weaker defenders who dare to encroach on his space.

But there is a way to shut him down, and, fortunately for the Timbers, Aurelien Collin wrote the instruction manual last weekend.

If the above image is Keane, the image below is Keane on Collin. 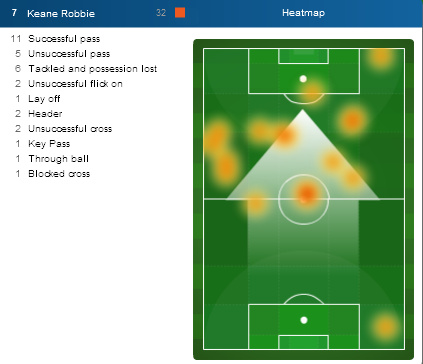 Collin had Keane's number for the duration of Galaxy's match against Sporting Kansas City, taking him out of the match completely. He did it by sticking to his man like glue and challenging for (and winning) nearly every ball that came their way. In the rare instances when Keane did get the ball at his feet, Collin immediately closed down the space the Irishman needed to create and prevented him from getting anywhere near the goal.

Mosquera appears to possess the physical attributes required to put a comparable kybosh on Keane. He showed off that ability superbly in the Timbers' match against FC Dallas earlier this season, when he and Eric Brunner confidently silenced Blas Perez for the entire second half.

As John Spencer pointed out at the time, "We became a better team when Mosquera and [Eric Brunner] started dominating their striker. He couldn't hold the ball up and lay it off and link the midfield players up. Every ball that came up, they were winning it and putting it straight back in there."

That's exactly what we need to see from him on Saturday. And let's not forget they'll both need to deal with either Edson Buddle or Chad Barrett as well. There will be precious little room for error.

But will he be ready? The timing of this challenge could hardly be worse for Mosquera. He hasn't seen any minutes since the early going of the match in New England, when he suffered a concussion and broke his face. In addition to whatever possible skittishness he might have in his first match after such a painful injury, there's the legitimate question of whether he will have fully returned to match fitness after a three-week layoff.

Of course, the Timbers will have more than just Keane to worry about when they travel to Southern California. Whoever starts in the center midfield will need to repeat the team's August 2011 performance against the otherwise dynamic Landon Donovan. And the attention Mosquera and Brunner pay to the Galaxy strikers will put more pressure on their teammates on the wings to contain Mike Magee and David Beckham.

But a solid performance against LA's prolific goalscorer will give the Timbers a good chance a road victory against the Galaxy and, we hope, put an end to the Timbers' "shitty month" (in John Spencer's words).