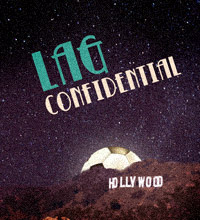 A little later than usual, but the information contained within is still just as relevant. As we all know, the Portland Timbers' season has not gotten off to a great start. While things were bright and cheery for the first couple games, things have gone decidedly sour since the New England Revolution match. Interestingly enough, though, if there is one team that has had a worse start to their season in the Western Conference it would be the LA Galaxy who is currently sitting at the bottom of the table.

To find out a bit more about the team and why they're struggling, I was lucky enough to speak with Josie Becker of LAG Confidential to figure out what the Timbers will be up against tomorrow night.

The LA Galaxy had a tremendous season in 2011, but their 2012 has not started off smoothly. Can you give us some insight into what's changed between then and now?

It doesn't take much insight to know that the Galaxy losing Omar Gonzalez for a good portion of the season to injury has severely set the team back. Arena drafted a center back, brought in another in the offseason, and still felt the need to trade Paolo Cardozo for defensive help earlier in the week. The issue seems to be that the back line is paper thin, and talent is always diminished by fatigue. Hopefully the addition of more depth will lead to a defensive resurgence.

Things looked better defensively last Saturday against SKC. What didn't look good is the offense, which has only looked good in one match so far this year. Robbie Keane's brace against DC United is really the only bright spot so far for the offense. Edson Buddle's return was supposed to bring a parade of goals, but he and Keane are too similar in style to be effective together. Too often you'll see Keane and Buddle run to the same spot. The club didn't get to practice together at all in the offseason, and now practices are full of injured players. So things have just been rough to get going, but the league is cyclical so not too much to worry about.

So do you anticipate a resurgence for the team soon? You mentioned a lot of critical areas that seem like they're long term fixes. How does LA go about getting the team working well enough to win again?

I think Robbie Keane has 12-15 goals this year, if he keeps his head right. Landon Donovan is going to get his 8-10. David Beckham will find his rhythm and get a fair number of assists. To say that things things weren't happening in the first month of the season and thus won't happen for the next five is foolish.

Paolo Cardozo had his fans but truthfully he won't be missed. The Galaxy have plenty of talent in the midfield, they've got guys who can push the team forward, and they've got guys who can get back on defense. Cardozo is a spark plug, on a team that is more Ent than Mustang. David Junior Lopes might fit right in on the back line, or it might not be until Leonardo comes back in two or so matches that things really shore up in the back. I'm not trying to predict a resurgence, just stating that this team is more talented than they've shown.

Speaking of Beckham, has his continued contract been worth the effort? Is he performing as well as he has in the past or was this a scenario where LA should have spent DP money on a younger player?

Beckham sells a lot of jerseys. Don't get me wrong, when he's on he's still one of the world's best free kick takers, but I don't think MLS is at a point yet where contract decisions can be made in the vacuum of on the field performance. Heck, neither is the NBA, MLB, or even the NFL. The Galaxy need Beckham because they've got a large stadium to fill, a partnership with adidas to fulfill, and a fan base which isn't passionate for the sake of being passionate like the Cascadia teams. I don't think you'll see the Galaxy go after a young DP until many years down the line. Unless it's Chicharito, that David Beckham contract, when the time comes that he surrenders it, is going to be passed down through the generations to another player who can sign autographs and fill stadiums.

And just the predicted starting line up for LA?

Super huge thanks to Josie for taking time out of her day to do this. Find out more about the LA Galaxy at her blog: LAG Confidential.