Share All sharing options for: Portland Timbers vs. Chivas USA Preview Interview with The Goat Parade 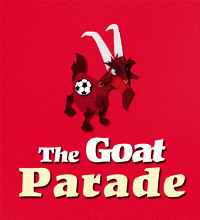 Remix! In a sense, anyway. Those of you who have been with us since the pre-season will remember that a similar interview occurred between ourselves and The Goat Parade for the pre-season tournament match against Chivas USA. As such, today's preview interview will be a bit shorter than what we're used to given that not a lot has changed between now and then. Still, there's some important information here should you be interested in this weekend's opponent.

Also, once again, huge thanks to Alicia Ratterree of The Goat Parade for taking time out of her day to conduct this interview with me. Check out her blog for more information on Chivas USA.

Since our last interview, the regular season has officially begun. Can you tell us a bit about how well it's been going for Chivas USA so far and, more importantly, what you like about what has happened?

Chivas do not have a great record at this point in the season, with just one win and three losses. But each loss has been very narrow, as Chivas have lost all three times by a 1-0 scoreline. There were considerable questions about Chivas' defense heading into the season, and considering their performances and the quality of the opposition, they have acquitted themselves very well so far. On the other hand, offensively, Chivas are sputtering, and have only scored one goal all season. If Chivas want to really recover and prove the boo-birds wrong, they need to maintain the defensive performances, but start scoring themselves.

They also, rather impressively, won away from home against Real Salt Lake. What went "right" during that game and how can Chivas USA repeat the success in Portland?

I think the cynic's answer would be that the Chivas' coaching staff had considerable inside knowledge of RSL's style and personnel, since they were formerly on the coaching staff there.

I would rather think that Chivas had a very defensive gameplan, played as a coherent team, got a few fortunate bounces in their favor, and had a good play by rookie forward Casey Townsend to get the winning goal in that match.

To repeat that success against Portland, Chivas need to play excellent team defense from whistle to whistle, but they also need to get their attack going. I wouldn't expect a blowout in the match, so it will likely be a cagey match for two teams desperately eager to get a result.

Since the pre-season tournament, has there been any stand out players? Any play that Timbers fans should keep an eye on?

Probably the biggest surprise in the first month of the season has been defender Rauwshan McKenzie. A center back who barely played in his previous stops with Sporting Kansas City and Real Salt Lake, he was out of contract in the offseason, and impressed coach Robin Fraser during the preseason. Although the Goats signed Colombian defender John Valencia as the projected starter, an injury in the first couple weeks of the season gave McKenzie the opportunity to demonstrate his ability in a meaningful game. He has been tremendous for the defense so far, even if the team's record doesn't indicate it. I'm certainly intrigued by Valencia, considering I haven't seen him play yet for Chivas, but if McKenzie continues to impress with the first team, Valencia may not get many starts.

And predicted starting line up?

I'll have to reiterate what I said during our last interview: Fraser is often unpredictable in his formations and team selections. But I'll give it my best shot:

Bolanos is a wild card of sorts. I figure Fraser will probably start two forwards, or at least a forward and withdrawn forward. I think Bolanos could get his first start of the season, but it could also be Alejandro Moreno or Cesar Romero, who scored against Portland in the preseason tournament.

Once again huge thanks to Alicia! Check out her blog for all things Chivas USA related.