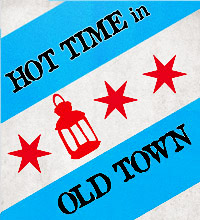 It's been a slow turn around for the Portland Timbers since that third game of the season when everything started going awry, but here we are. In four games the Timbers have recorded tree shut outs, one win, one loss, and two draws. On top of that they've only allowed in two goals total in 360 minutes. Those stats aren't bad and it gives me hope for tomorrow's match as well as for the rest of the season. But more on this tomorrow.

Today, we have our usual preview interview with Ryan Sealock of SB Nation's Chicago Fire blog: Hot Time in Old Town. Follow that link to read some of my answers to their questions.

The Chicago Fire are off to a fairly decent start to the season (fourth in the East). Was this expected? Are fans happy with how the team is playing so far or are there higher expectations for the team?

The answer to this is really yes and no. Going into the season, most fans expected a very high finish in the conference and a deep playoff run to boot. Although we aren't at the top of the standings, I think most of us are pretty content with where the team is at right now. We just came off a busy week against a couple of top teams, and took 4 points out of those games. That is definitely not too shabby.

Earlier in the year I was a bit more tentative with the teams start, but that was with sporadic play as the Fire were dealt some early bye weeks. This prevented the team getting into an early groove. That now seems to be solved as the team is really gelling and picking things up. Confidence is rising right now in Fire land and with the East being wide open (Sporting KC's recent struggles demonstrate this), there isn't any reason the Fire can't win the Conference. At least that is what my expectations are right now.

Coming off a couple rough seasons, how important is it for the Fire to make a decent showing in this year's play offs? What would be the likely fall out for another missed play off?

Playoffs are a must to Fire fans. This is our motto every year, so the past 2 seasons that have ended short of that goal have been pretty devastating. I definitely think it is very important for the Fire to not only make the playoffs this year, but to also make a deep run. I feel that our team is good enough to go quite far, and playoff success is one of the many things Fire fans hold in high esteem. Should the unthinkable happen and the Fire would somehow miss the playoffs again, there would certainly be outrage but I don't foresee any grand, sweeping changes being made.

Current head coach Frank Klopas is really putting his fingerprint on the club, and the fruits of his works are really starting to show. Before Frank, the Fire had a bit of a carousel going in terms of coaches, and it would seem that Frank is the guy that has come in and stabilized that. So I think he would be safe even if a nosedive would occur. He also seems to be held in pretty high regards by Fire owner Andrew Hauptman so that helps too.

The pieces are definitely there to really do some damage in the playoffs. And the Fire aren't done adding either. We have attacking midfielder Alex joining us this summer, and we could still add another player or two once the window opens. Andrew has made it clear that if a big name signing comes along that is right for the team, the money is there to pull the trigger. So this team could be even better than it is right now within the next couple of months.

The Timbers Army and Section 8 have quite the history. With Chicago having lost both times last year against the Timbers, do you, or anybody else, see a budding rivalry growing between the fans and clubs? With the East-West home-away series being played over two years now, does this factor in at all?

I definitely can see a rivalry going, especially with the East-West Home-Away format taken into account. That being said, I think it would be a pretty friendly rivalry given that both supporters groups are pretty close. I know how that's how I feel, along with many other Fire fans. One of our authors on the website, James Coston, is pretty fond of the Timbers himself.

I know that Chicago fans are definitely looking for a little payback though from last year. Playing in Portland is always tough, but at least we aren't opening up your stadium again like last year (and we all know the Fire are the go to team for new/renovated stadium openings).

I think what is developing between the two teams is really good for both cities. While it's fun to hate on a rival like Columbus or New England (in our case at least), it will also be pretty nice to have a club that we play with a friendly rivalry. I went to the Timbers/Fire game last year at Toyota Park, and had a very good time conversing with Timbers fans in the parking lot. You guys are certainly a classy group of fans, and I tip my hat to you.

Looking more tactically, what or who is the driving force behind the team and who or which player(s) should Timbers fans be keeping an eye on on Sunday?

I always like to point out the obvious here, which would be Sebastian Grazzini and Dominic Oduro. Think of Grazzini as the maestro or conductor of the offense if you will. And Oduro is of course our main scoring threat and resident speed demon, along with Patrick Nyarko. Dom is quick like a Velociraptor (sorry, inside joke Jurassic Park reference). When both players are on, teams have a hard time stopping us.

I would have [also] answered Chris Rolfe, but it looks like he won't quite be fit in time for the match. His Fire re-debut is getting closer though.

The other player to watch is Sean Johnson. He will likely be in goal Saturday again, but he has been very up and down since the Olympic qualifying fiasco. Fire fans are definitely in his corner as he strives to get his confidence back. One time he can look very shaky, and then make a brilliant save the next play. A confident, in form Johnson really does wonders for the rest of the team spirit. If Sean is on top of his game this weekend it will be a big lift for the club.

For predicted lineup, I think it will be unchanged from last game. I see this Starting XI:

And once again, let this thread serve as the official pre-game chat as well. I think I'll be doing this from now on as it's a nice intro into the opposing team and serves as a natural discussion starter. Here are some topics to help get the conversation going: