Share All sharing options for: Cascadia Cup Preview: How Portland can Win

It is the end of the work week and only one more rain filled day to go! Leading up to Sunday we have already seen the trash talking from both sides (here and here.) and the preview material, with a great read on getting to know the enemy from Andrew. The energy is building and on every UEFA 2012 broadcast I have seen ESPN has been hyping the game.

With all the excitement and the build up to the game the question on my mind and most likely on yours too is will Portland make a game of it? Face it, most of us are hoping for a good game but not expecting one. This might be on your minds, but the reality is this is a rivalry game, and in these types of games the records are thrown out the window.

So what does Portland need to do to win this game? Find out after the jump.

Except for 1 massive mistake Troy Perkins made in the LA game he has been the most consistent player on the Timbers' roster over the last 4 games. He has made save after save to ensure the Timbers had a fighting chance and that needs to continue for Portland to have any chance in this game.

With all that said the biggest key to Troy's game will be his distribution. Seattle is a team that likes to possess the ball for stretches at a time and if Troy's distribution is as bad as it was against in the LA game Portland will have some rough spots. However Troy has shown he can throw the ball out of the back and this needs to become more of his first option and not the sometimes option.

The CBs really need to bring their "A" game for the Timbers to have any shot at winning this game. Freddy Montero is a a player who can scorch a team for any part of the field and even though he is in one of his goal funks you have to honor him. If Seattle tries to lob cross after cross into the box this will play right into a major area of strength for the Timbers. However if they play it through the middle the CB's need to be prepared to watch Montero very close and not lose him or he will make them pay.

We all know this is the biggest area Portland needs to show improvement in order for them to have a chance to win the game. Portland's offense was terrible, that is putting it nicely. in the LA game and lacked any speed nor did it create any legitimate chances. William Conwell and I both agree the biggest problem in the last game was there were hundreds of side to side passes and very few passes going forward into dangerous areas.

To illustrate what I mean I grabbed some screen shots of the LA game (I know the examples are chronologically out of order but the paint a decent picture of the horrid offense). The first picture is of the buildup of a play when Franck Songo'o found himself in the middle of the pitch with the ball after an LA attack broke down. 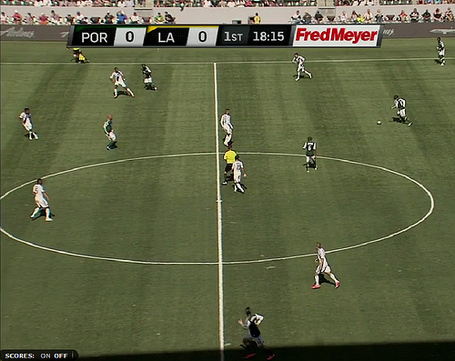 As you can see he received the ball in an area where he could make some things happen. Especially with Mike Chabala wide open with acres of space on the left. Now, I don't have any video, but Kris Boyd makes a run in between the two CB's and keeps their focus on him, allowing Chabala to continue his run down the left side. Any guesses where Songo'o plays the ball? 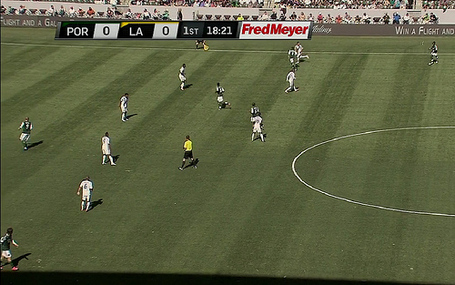 Well, all Songo'o did was slowly dribble towards the right side of the field as the defense recovered and hit a 10 yard pass to Kalif Alhassan who just stood over the ball for 5 seconds while everyone ran away from him. I could have put about 20 more examples through the rest of the game up and the outcome would still be the same. A square pass to a player who then just sits on the ball or hits a back pass to the CBs. No movement, no urgency and no pace in the attack.

What needs to happen is more of the following play, the first pic is run up to the attack.

As you can see this is almost the same as the last build-up except there is no Chabala on the left side. KAH is standing over the ball with some options in front of him. Boyd is making almost the same run as the previously example. The biggest difference from the last example is where the ball is played.

As you can see the through ball put Boyd in a great position but in the end was a little too strong. Despite the fact that Boyd was unable to actually get a shot off, because the ball went wide, this is the ball that needs to be played. If John Spencer insists on playing a 4-4-2 and uses the wing to generate scoring opportunities then the ball needs to be played behind the defense of the opposition. This can be achieved with through balls to the forwards or it can be the forwards playing the outside wings behind the defense.

In any case the midfielders of the Portland Timbers need to have more of a sense of urgency and pick up the pace offensively. I have watched a ton of soccer on TV the last 2 weeks, and I don't remember who said it, but one of the announcers mentioned something to this effect: "A square pass is more dangerous than a forward pass because if the square pass gets intercepted 2 players are out of position defensively. If a forward pass is intercepted at least 1 player is in a defensive position."

Play downhill not side to side and Portland has a chance to win on Sunday.

Defensively, Diego Chara needs to do what he does best and muddy up the middle of the pitch. If he can starve the Seattle forwards of service on the ground through the middle of the pitch Seattle will be forced down the wings and into hitting crosses into the box, which as stated before plays to an area of strength for the Timbers.

The outside wings need to be aware of the speed and abilities of the Seattle players on the wings but not to the detriment of their offensive responsibilities.

It is hard to fault the forwards as they have been starved of service by the lack of creativity in the midfield. When Boyd did get a couple of opportunities he forced Josh Saunders to make a good save -- and that was with only 2 half chances. Imagine if Boyd actually got 5 or 6 half chances. Or maybe one or two real chances.

Danny Mwanga needs to link up better with the midfield and allow the outside players to get behind the defense. Granted his chemistry with the team is a work in progress but that processes needs to be sped up. If Danny can combine with Darlington Nagbe to hit either Boyd or the wing players through balls behind the defense this will create more space for themselves in the center of the pitch.

My heart say Portland wins this game. My brain is telling me I should be grateful if it is a tie. In the end I think Portland will come away with a tie 1-1 and hope it is a win.