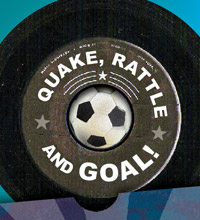 Remember when I said this week was gonna be hectic? Well here's your proof. It's a few hours from game day and I'm just now putting up my preview interview form earlier this week. This also means that tonight we'll use an abbreviated match thread.

In any case, I was lucky enough to interview Robert Jonas of fellow SB Nation blog: Quake, Rattle and Goal to help us figure out exactly who this San Jose side is, and why they're so damn good right now. Check it out!

Big win for a big rivalry. With San Jose already leading the league, what can they take from their big game against the LA Galaxy to Portland and how does it work in their favor?

If you are a fan of good defense, you were sorely disappointed by last Saturday’s California Clasico. The Earthquakes surrendered three goals to the Galaxy that can in part be blamed on shoddy defensive work. The team has not had a clean sheet since the end of March, adding to the concerns that the back four still has not found their groove from those early season matches. Injuries split up the defensive line that made it through March without conceding a goal in the run of play, and that unit needs to bring that effort back again.

However, the Earthquakes offense created four goals against the Galaxy, good enough for the win and good enough that sometimes the defensive lapses can be forgotten. The Stanford Stadium pitch dimensions are the same size as Portland, so expect the Earthquakes to approach their game at Jeld-Wen Field with the same attacking philosophy they displayed over the weekend. Speed players like Marvin Chavez and Shea Salinas should start for San Jose, and they will look to hug the touchlines and feed a steady diet of crossing passing into the forward duo of Chris Wondolowski and Steven Lenhart.

Against the Galaxy, the Earthquakes continuous punished their opponents on the flanks. The midfield was sparingly used to connect to the wings, with attacking midfielder Rafael Baca drifting to either side of the field depending on the point of attack. Khari Stephenson could get the start as defensive midfielder, and his role will be as the pivot man in the Earthquakes diamond-esque formation. No secrets really — the Earthquakes will look to keep Portland on their collective back foot with a direct style of possession and if necessary outslug the Timbers offensively as they look for their fourth straight MLS victory.

We always hear about Chris Wondolowski, but there's obviously much more going into this San Jose team than a single player. Who are the lesser known impact makers for San Jose and what do they bring to the squad?

With a combination of speed and ball handling ability, Marvin Chavez has transformed the way the Earthquakes approach the attacking third. The FC Dallas cast-off has quickly adapted himself to head coach Frank Yallop’s style and become an important provider of service to the forwards. The Honduran midfielder sits atop the team statistics chart in assists, and together with outside back Steven Beitashour, has helped create just under a third of the team’s total goals. Add in that Chavez is the team’s designated corner kick taker, and the Earthquakes have certainly benefitted this season from his addition to the team.

In combination with the aforementioned Beitashour, fellow defensive mate Justin Morrow has helped improve an Earthquakes defense that did not impress in 2011. Beitashour and Morrow came to San Jose via the 2010 MLS SuperDraft and have developed into a pair of potent outside backs. Both players are very adept on the ball and both are tasked with exploiting space up the wings as secondary entrants into the Earthquakes offense. Beitashour was the team’s leading assist provider last season and ranks second so far in 2012.

If San Jose did have a weakness, where would and should Portland attack to find it? How can Portland break down the best team in the league?

The Earthquakes have been prone to giving up some soft goals this season, especially in chances created through the middle of the field. Big centerback Victor Bernardez has at times looked like an All-Star, but at other times can be pulled too far out of position by opposing forwards. He has a tendency to hold the ball instead of clearing it from danger, and he’s been caught when opponents apply extra pressure. He is a big part of the reason the team sits in first, but on any given day might give up that one goal. The exploits of the offense have been more than enough to make up for any mistakes.

On offense, because the Earthquakes focus more on their play on the wings, the advanced attacking midfielder role has not been a strong spot on the field. Teams that are confident on the ball in their midfield tend to take the edge in time of possession, and they usually end up employing a more direct route going forward. Success in the center of the pitch forces the Earthquakes wing players to pinch in more to help defensively, thus taking them away from their preferred stations along the sidelines.

Once again, huge thanks to Robert Jonas. Check out his site for everything San Jose Earthquakes: Quake, Rattle and Goal.

We'll have our match thread up about an hour before kick off tonight.