The Numbers Behind the Portland Timbers' Lack of Penalty Kicks

The Portland Timbers have yet to attempt a penalty kick in 2012, much to the chagrin of Timbers fans, as well as owner Merritt Paulson.

Share All sharing options for: The Numbers Behind the Portland Timbers' Lack of Penalty Kicks

The Timbers are now close to becoming the fourth team to suffer such a fate, joining Chivas USA in 2011, FC Dallas in 2006, and the 2000 Kansas City Wizards.

That's in spite of numerous occasions in which one was probably deserved.

My personal favorite non-call happened May 26 vs Vancouver Whitecaps. Kalif Alhassan had his legs removed from under him by a sliding Jay Demerit, who came nowhere near the ball.

More recently we saw Mike Fucito get taken down in Toronto, Diego Chara get tripped up against the Seattle Sounders, and a Bright Dike cross get deflected by San Jose Earthquakes defender Ike Opara's arm.

Even worse, we've seen quite a few MLS matches featuring a slew of PKs awarded with no merit at all. The Timbers, again, are getting the short end of the stick.

So I decided to look a little deeper at the history of PKs in the league and attempt to explain why the Timbers haven't been invited to the party this year. The data I used comes primarily from team statistics gathered from mlssoccer.com.

If the Timbers were to finish the season with zero penalty kicks awarded, how far outside the norm would that really be?

As mentioned above, just three teams in the history of MLS have finished a season without having been awarded a penalty kick. Since 2000, the most penalty kicks a team has been awarded is ten -- that has also happened three times, but only once after 2000. In the middle is roughly what you might expect: a bell curve. 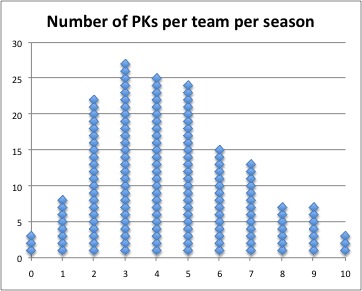 Another 0 being added to the above graph, along with the totals other teams have this year -- four teams are at 2 and 3 each, and three teams are at 1 and 4 each, one team each at 5, 6, 7, and 9 -- would fall predictably into the curve. In other words, it is rare, but it should happen every once in a while.

So why this year? Because MLS has awarded fewer PKs per team game in 2012 than in any year previous.

Since then the number has fluctuated every year, with a slight downward trend overall, as shown in the graph below, illustrating average PKs per team by year. 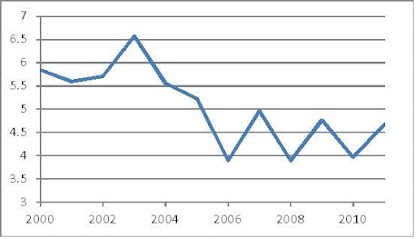 If present trends continue in 2012, just 3.8 PKs will be awarded per team -- none, of course, for the Timbers.

The consistency of that fluctuation is pretty astonishing. My interpretation is that the increasing popularity of the league over the last decade has increased the scrutiny to which the referees have been held, leading them to overcompensate one way or the other in response to criticism. (I'm going to come back to this point a little later.)

With the added role of the MLS Disciplinary Committee, the overall downward trend will probably continue, as referees err more heavily on the side of not making game-changing decisions if at all possible.

So, while a team being awarded zero PKs is historically rare, it's probably going to be more common in the future.

To be fair, in order to earn a PK, dodgy refereeing or not, you have to consistently be in the penalty area in a threatening position, and the Timbers don’t do that well at all.

So I looked long and hard for a correlation between PKs and other stats that are often collected in the penalty area -- like shots, shots on goal, corner kicks or offside calls. If there were a correlation between one of those statistical areas and PKs awarded, it could be concluded that there is a direct relationship between actions taken in and around the box and penalties called.

Shots to penalty kicks looked the most promising, showing just a slight upward trend in the adjusted shot average as the number of awarded PKs grows. I removed the results from 0 and 10 PKs because of the tiny sample size for both data points. 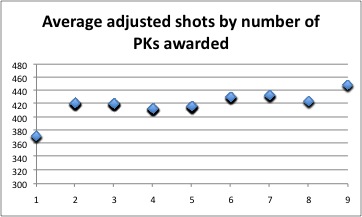 There's something there, but in my amateur opinion it's really not enough to draw conclusions, especially considering the 2-7 range, where we have the most data to go on, is mostly flat. That doesn't necessarily mean that pdb isn't right -- it just means we don't have a very good way of knowing from the data we have available. 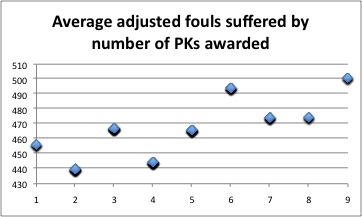 This comparison produces a slightly stronger trend line, about what one would expect. Certainly when you've got budding young actors like Steven Lenhart and Alan Gordon (each at 2.5 fouls per 90 minutes) hanging around the penalty area, you're going to get a few more calls, and indeed San Jose have been awarded seven PKs in 2012. Kris Boyd, by contrast, is fouled at a rate of just 0.6 per 90 minutes -- the lowest among strikers with at least 800 minutes.

But as the graph shows, it isn't necessarily a straight line. After all, Eddie Johnson and Fredy Montero (2.1 and 2.5 respectively) both play as strikers for the Seattle Sounders, who have been awarded just one PK in 2012. The fouls suffered correlation still isn't a perfect explanation.

Get to the Point

Let's take a step back. Remember the above discussion of how up-and-down those league-wide PK averages have been since 2005, and how the league tends to overcompensate every year? Well, it turns out the same sometimes applies to specific teams. For example, DC United's PKs/year graph looks like this: 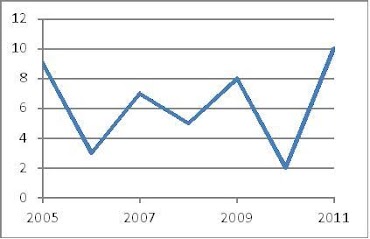 Not all teams have followed quite so stark a an up-and-down seven years. But the trend appears applicable to those teams currently at five or more PKs this year. Excluding Montreal (9), those teams are the San Jose Earthquakes (7), Houston Dynamo (6), and FC Dallas (5). They finished last year at 2, 3, and 2 respectively.

On the converse, the four MLS teams currently sitting at 1 or 0 PKs are DC United, Seattle Sounders, Vancouver Whitecaps, and Portland Timbers. Last year those teams finished the year at 10, 9, 7, and 5, respectively.

Note that all three Cascadia teams were among the top teams last year in PKs awarded and are now among the lowest. Coincidence? Hm.

It is possible that when the three Cascadia teams started playing in the league together for the first time last year, referees were over-sensitive to the vociferousness of the crowds in those stadiums. Looking at the data in the offseason, the league might have come to the conclusion that too many PKs had been awarded to these teams. They would have instructed referees working in Cascadia to ignore the crowd and make a special effort to be objective in their decisions.

Instead, the referees would have gone along with a tendency they have shown for the last seven years: they over-compensated.

Now, without question, that's a pretty big jump to make, especially considering how very limited the data I'm using is. From the data I have I can't actually tell if most of the PKs were awarded in Cascadia or on the road. This article is probably better as a conversation starter than the last word on the issue.

I'm especially curious about a possible correlation between PKs and red cards, the two most game-changing decisions a referee can make. If red cards follow a similarly fluctuating pattern as PKs have shown, that would bring us closer to a definitive conclusion.

But for now, this is what I've got. Thoughts? Ideas? Let me know what y'all think in the comments.