After the first two days of training we already have plenty that has been said. Here are some quotes that didn't make it into the day's training report as well as a few pictures from yesterday's practice.

Update: Posted more photos and all the quotes I care to transcribe.

On why he chose to come to Portland

I had quite a few opportunities to go places around the league and I was excited about that, but weighing all the options it was, soccer-wise, a good place to live, a new opportunity. The challenge here excited me more than anything. I just felt that at this point in my career I had accomplished a lot in Salt Lake and I was looking for a new challenge. I wasn't going to have another chapter there and here just seemed like a perfect fit; the ambition of the club, of the owner, of the fans.

On what the challenge is in Portland

Turning it into a winning organization, an elite organization. The organization is elite in many aspects; with the fan base, the support, all those different things, the professionalism, but the success on the field hasn't quite translated yet, so the challenge is turning this team into a playoff caliber team.

On what he has learned while playing with Real Salt Lake

Learning how to win on the road, the mentality that you need, sharing that mentality, coming to train every single day, working hard, and understanding that there are no days off. In this league the one thing that I have learned over the years is that winning games is extremely difficult and winning consistently is even harder.

On where he should play in the midfield

I am just going to work as hard as I can and earn a spot in the midfield. I'd hope to be as close to the center as possible but when you have a lot of talented guys then you have to find a way to get everybody on the field.

On how his experience can help the team

I'd like to think that my experience will help us, both at home and, probably more importantly, on the road. I always used to tell [Jason Kries], if I had to be rested I'd want to be rested at home, because those are all the easier games.

Winning on the road needs to be an absolute priority and it is something that has not gone right the first two seasons. It is an extremely difficult challenge, especially when you are assembling a new team, but it is something that we have got to figure out how to do. Otherwise we will be on the outside looking in again, and I don't see that as an option.

On how he ended up with the Timbers

The most important part of coming to the MLS was choosing the right situation, the right coaching staff and organization and everything. It was just kind of a perfect fit for me.

On who he talked to before joining the Timbers

George Josten, for instance, I was with him in Columbus. He had great things to say and he was one of those guys that wasn't picked up for the MLS, so he had kind of a reason to say negative things and he only had positive things. He really convinced me.

Also, I asked a bunch of guys that were playing on other teams, what is the reputation of Portland? How do you like going there and playing? Every one of them said that they had the best fans in the league and it was just a great place to be.

On the team's need for a right back

It is a competitive team and bunch of guys, so I can't guarantee anything. Nobody can guarantee anything. I have to fight for it and win it, but certainly the style that [Caleb Porter] likes to play fits me perfectly. I am that kind of player. I am up and down the wing. I have my defensive responsibilities but I love to get into the attack and so his system really fits my style of play and that is a big, big reason of why I came.

On his familiarity with Caleb Porter's drills

They have all been new drills so I am learning the same as all the other guys. So far it has been great.

On what his teammates have asked about Porter

First of all they have just asked me what kind of guy he is. He's a great guy and he's one of the best coaches that I've ever had. His style of play, I feel, is going to suit our style of play really well.

On getting used to Portland

I worked with [Mike Toshack] before, so that's helpful and the rest of the staff is great. They helped me out from the beginning so I think it is going to be a smooth adjustment for me.

I've been through the worst and the best with Toronto in the last three years and I can definitely know when it is good and bad. I have a very good feeling about this team. I don't want to jump to conclusions too early, but for the moment I think we look very good. I think there is a lot of guys that like to play, which is very important.

On his 2012 season with Toronto FC

There was some good stuff and there was some bad stuff. The worst in MLS, the worst is in MLS, but the best is in [CONCACAF Champions League]. We reached the semi-final. ... It's a very challenging season for a goalkeeper. I had to deal with a lot of bad stuff, but it is a great experience for me.

There is very athletic players who are very focused. I told Ryan Johnson yesterday and we can see how athletic this team is. Everybody is over six feet tall and every body, when they come to work in the morning, you can see how focused they are.

On coming to Portland with Ryan Johnson

His wife is from here, so we were just talking and they are helping me out with finding a place and everything else. They were showing me around, what is good restaurants and things. It is very helpful to have somebody here.

On who will be the starting keeper for the Timbers

Nobody is assuming anything. Everybody's door is wide open here. We are all fighting for the number one spot, so I don't see anybody as an established goalkeeper who is going to be number one. There is no guarantee in any sport, so that's how I am approaching this season.

When I got a call from them I was very happy. I wanted to find a new challenge in my life. I'd been in Toronto for three years and I was ready to move on and go somewhere else. Portland is a great opportunity for me and for these three or four days I have absolutely loved it here.

On his off-season and time with the Nigerian national team

I wouldn't really call it an off-season because I was never really off, but yeah, it was definitely a good off-season for me.

On how his time with the national team helped him

It is just a wonderful experience to be around those quality players playing in La Liga, the Premiership, even Serie A. You learn their style of play, their ideas, their composure on the ball. I kind of realize how close I am, that I am really not that far away, but at the same time what I need to work on to get to where I need to be. I think that only motivates you to do that much more.

Simple ideas, playing simple, the shape of the team. He is really getting guys thinking about their positioning on the field and their passes and I think that will be really good for us.

On how Porter's style fits the team

I definitely think it plays to the strengths of this team. I think this team is looking really good already. I'll be surprised if we don't do well come the start of the season.

On joining the Timbers' preseason camp

It's been great. It has been a dream come true to finally play for the first team here. I was on the [Timbers U23's], so finally being able to say I am a part of the team now is amazing. It is a dream come true.

On playing alongside other former U23's

I think it is great that the Timbers are dedicated to having their under 23 program be a feeder for the first team. I know that is how a lot of European clubs do it and it definitely gives you some added motivation when you are a member of the U23's to work hard and to improve your game each day you are here.

That was nice too, seeing a few old teammates and being reunited again.

Here are some shots I took at practice yesterday (1/22): 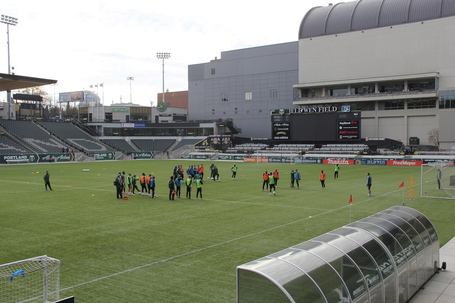 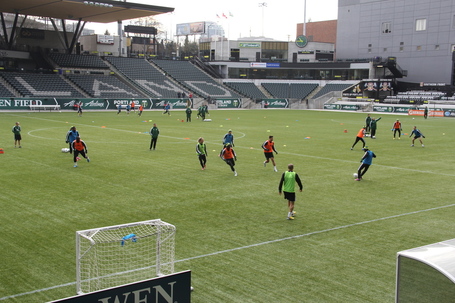 Kalif Alhassan passes as Andrew Jean-Baptiste, David Horst, and Futty Danso try to get the ball back in a game of 7v3 keep away. 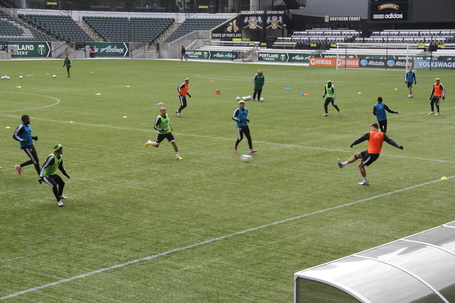 David Horst passes the ball during a game of keep away. 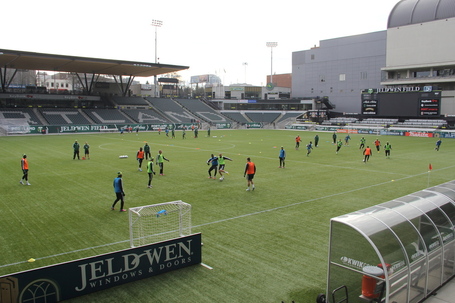 Mikael Silvestre holds off Danny Mwanga during the 3v1 phase of keep away. 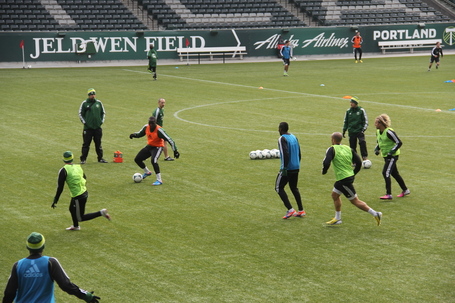 Andrew Jean Baptiste receives the ball during a game of keep away. 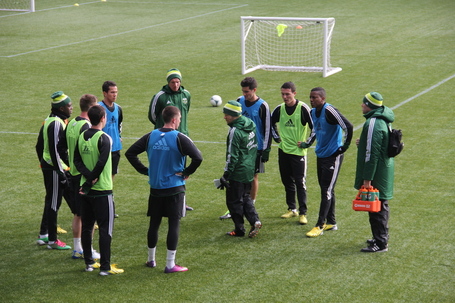 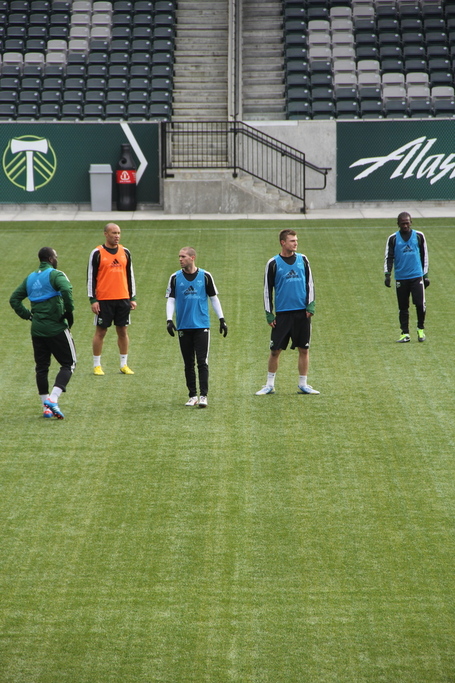 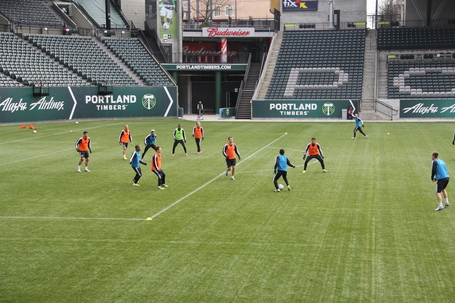 Diego Chara holds the ball as Ryan Miller makes a run down the far side during a short field game. 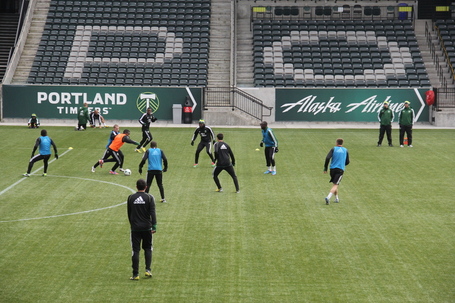 Danny Mwanga holds off Ryan Miller and takes off on a run. 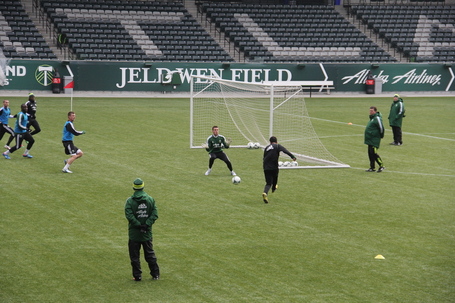 Chris Taylor crosses the ball into the box as Milos Kocic covers the near post. 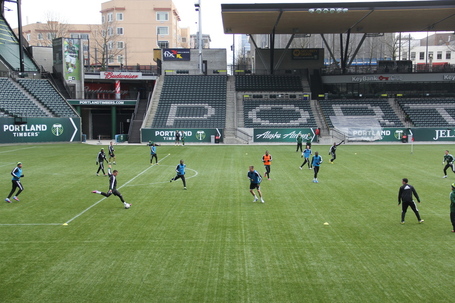 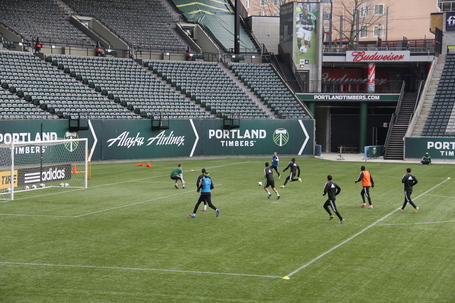 Will Johnson and Sebastian Rincon try to recover a loose ball in the box as trialist keeper Jason Dodson gets into position.