Stumptown Breakdown: Put Your Hands Up

One is enough for the Timbers as Kalif Alhassan leaves the Sounders gutted.

Share All sharing options for: Stumptown Breakdown: Put Your Hands Up

As halftime approached at Jeld-Wen Field, it was clear that, sadly, the Portland Timbers weren't going to have the joy of running rampant over the Seattle Sounders like other teams had done recently. Fortunately they didn't need to. There were some close calls late in the game, but one goal was enough for the Timbers again, and they got it right before the halftime whistle blew.

Since the goal didn't come from something like a counterattack, quick break, or free kick, it's a little challenging to pick out one moment where the play really began. I'm going to say it's when Mauro Rosales puts a pass too far in front of Alex Caskey, and Jack Jewsbury steps up to recover the ball before Clint Dempsey or Lamar Neagle can. 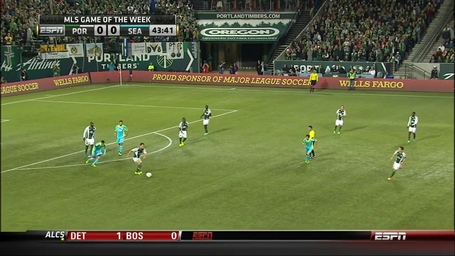 Jewsbury plays the ball forward to Maximiliano Urruti, Urruti finds Darlington Nagbe, and soon the Timbers are comfortably working the ball around the outside of the Sounders box. They look for holes in the defense, a way into the box. They find none and eventually Kalif Alhassan plays the ball back, and we're back with Jewsbury again. 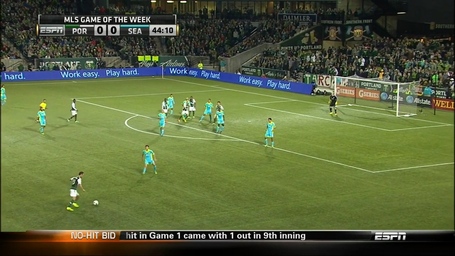 As he prepares to send a cross in, the Timbers get some numbers in the box. The front three plus Johnson all crowd in waiting for the ball, while Alhassan hovers just outside the 18. 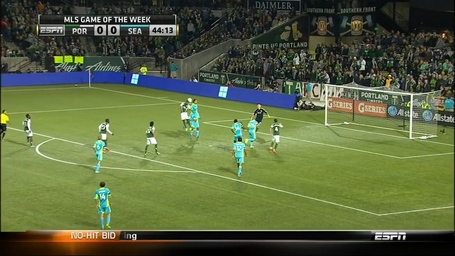 Try as they might to make it work, winning these crosses and putting them on frame is really not the Timbers' game, especially with the attackers who featured in Sunday's starting line-up. Nagbe does challenge Patrick Ianni well in spite of Ianni's height advantage, but the ball is just over both of their ends. DeAndre Yedlin seems surprised that it reaches him and the ball bounces off his shoulder. 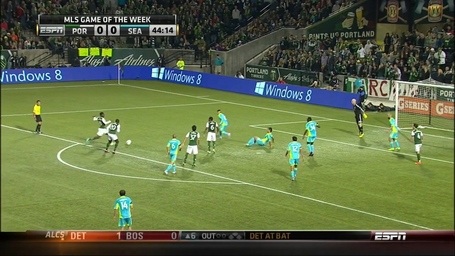 It lands at the top of the box where both Jose Valencia and Alhassan make a move for it, but fortunately Valencia yields to Alhassan, who is running onto the ball at a better angle to take a shot. He shoots with his first touch, keeping his shot low even as he hits it on the bounce. 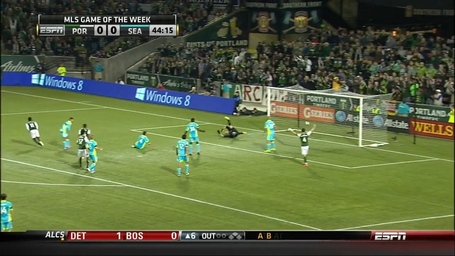 Marcus Hahnemann goes down to his right as quickly as he can, but he isn't quick enough.

The Timbers had a bit of luck on their side--even though the cross isn't great, none of the Sounders are able to clear it and the ball bounced right to them--but they also made their own luck here. When Valencia and Urruti see that they won't win the cross, they pull back to the top of the box, just like Camilo Sanvezzo did before his insane scissor kick goal. Much like the Timbers' defense the week before, Seattle's defenders don't follow them. Alhassan is already waiting there, so the Timbers are ready to win the second ball. The Sounders are not.

It's also encouraging to see the Timbers get a goal from one of these possession spells. All of this happens in only about 30 seconds, so it's not a particularly long period of possession, but the Timbers are using it the right way. Caleb Porter has talked about possession with purpose this season, and there does seem to be an existential question that periodically plagues teams who frequently have most of the possession: we have the ball all this time, but what are we doing with it? On this particular play, Nagbe and Valencia both drive at the Seattle defenders, looking to see if they can get into the box, or play someone else in. When that didn't work, they tried a more direct approach, which did work (albeit not as they had probably envisioned).

There was a similarly promising spell a few minutes before this one, where after a lengthy string of passes, Nagbe found Urruti at the top of the box. Unfortunately he couldn't quite turn quickly enough to get into the box. If he had, that probably would have been the Timbers' opening goal.

It wasn't a very pretty game, even for the victors, but the Timbers certainly have positives to take away as they move on to seek their first win in their fourth meeting with Real Salt Lake in 2013.