Stumptown Breakdown: All We Really Want is Goals

The Timbers put their third goal of the game away with a good team effort.

Share All sharing options for: Stumptown Breakdown: All We Really Want is Goals

As fun as a game like the Portland Timbers 5-0 over Chivas USA is for the winning fans, any attempt to draw broader conclusion or pick out positives from the performance is generally met with some variation on "but it's only Chivas." With that in mind, I tried to pick a goal this week that seemed to be less about Chivas being Chivas and more about good soccer and strong teamwork by the Timbers.

The play all starts with a long ball, but it is the best kind of long ball. An angle used in one of the replays gives a much better look at this beauty of a pass from Futty Danso than the original angle does. 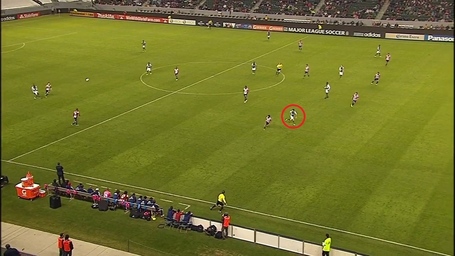 When Futty gets the ball, Diego Valeri sees an opportunity, and rather than waiting for the defense to play it out of the back on the ground, he starts to make a run. Futty sees Valeri suddenly pick up the pace and boots the ball upfield. This is no aimless clearance by Futty though. 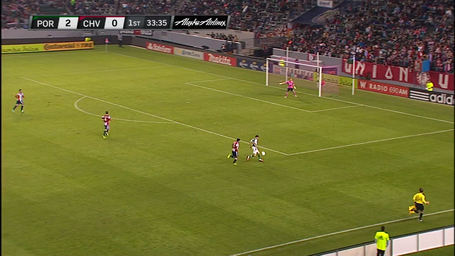 Here is the ball as it comes down perfectly, precisely, in front of Valeri, whose run has him in behind the Chivas defense. It's a pretty perfect long pass from Futty.

(It's worth noting that Colorado and Vancouver both gave Seattle fits by playing guys in behind the offside trap with a through-ball or a ball over the top. It's hard to say for sure if the defense would still be susceptible to making that kind of mistake because Colorado was pretty poor last night and gave Seattle very little to worry about.) 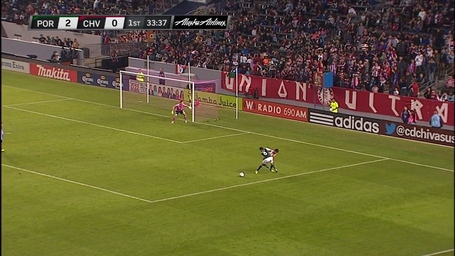 Josue Soto does manage to chase Valeri down  as he settles the ball, and Soto tries to impede him as he cuts into the box. It doesn't work. 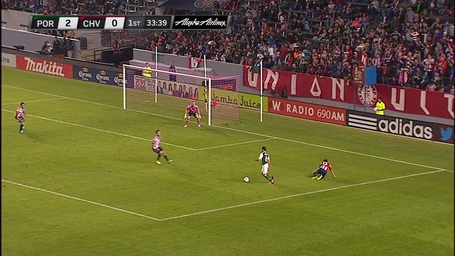 Now Valeri is in the box and this part really is just Chivas being Chivas, because Valeri needs some time for his teammates to catch up and Chivas pretty much gives it to him. Carlos Bocanegra looks like he sorta wants to close Valeri down, but also like he's afraid of leaving a gap right in front of goal. The result of his indecision is that he doesn't close down Valeri, but he does leave a gap. He also gets nutmegged. 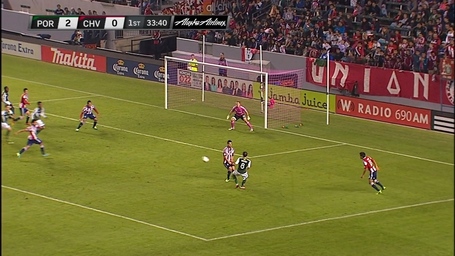 As Bocanegra is stepping up, Rodney Wallace, Will Johnson, and Jose Valencia come storming into the box and Valeri plays the ball into that space vacated by Bocanegra. 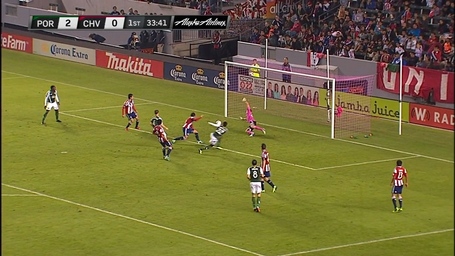 Now admittedly, relative to other defenses it probably doesn't take much to confuse Chivas' back line, but the three simultaneous, criss-crossing, overlapping runs of Johnson, Valencia, and Wallace could probably make a better defense falter too. They're certainly way harder to defend than one guy just making a run to the far post.

It's Wallace who pounces, and Chivas goalkeeper Tim Melia, who takes too long to figure out where the shot is going to come from, can't get to the far post fast enough.

Even if it was "only Chivas," what a great time for the Timbers to get the offense firing on all cylinders. All but one of Portland's top five scorers put one in the back of the net Saturday night, including guys like Wallace and Ryan Johnson who have gone a while without scoring. Of course Diego Valeri saw some action as well and he will hopefully benefit from having the first half to get back on his feet with two goals and one assist before getting a rest for the remaining 45 minutes. As he has shown, his play is often instrumental to the Timbers' success and having him healthy and in good form for the playoffs could be a difference-maker for Portland.