Stumptown Breakdown: And Then a Miracle Occurs

Share All sharing options for: Stumptown Breakdown: And Then a Miracle Occurs

Last Sunday's game at Jeld-Wen field was a pretty big deal. The Portland Timbers were sitting just a point above the LA Galaxy in the standings. A win would put them four points clear of the Galaxy and farther away from that ominous red line. A loss would let LA leapfrog them. Even a draw, especially at home, could be a major blow to the Timbers' momentum so late in the season.

In such an important game, the dearth of good scoring chances for the Timbers in the first half was frustrating. They just needed one big moment, and in the second half it was finally provided by the new guy.

I am going to have to disagree with the LAG Confidential article I linked to in my Rose City Roundup yesterday. This is not particularly bad set piece defending. It doesn't even come close to the Steven Lenhart debacle, the Eddie Johnson fiasco, or the Javier Morales bicycle kick clusteryou-know-what. 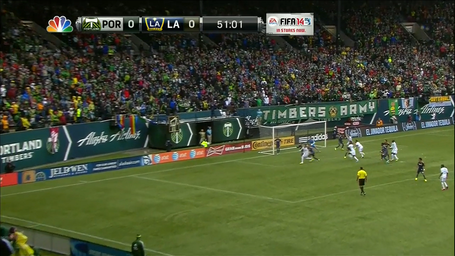 There are two players right on Urruti at the near post as Will Johnson puts the ball in play. Plus, the corner kick was not the best. It was already coming down at the near post, so it wasn't the type of set piece that Futty Danso or Pa Modou Kah was likely to be able to get a head to. If you're Sean Franklin or Juninho and you're at Urruti's back, you are probably thinking the best he can do is maybe bring it down off his chest, and since he's facing away from goal that's no big deal. You've got this. It's all under control. 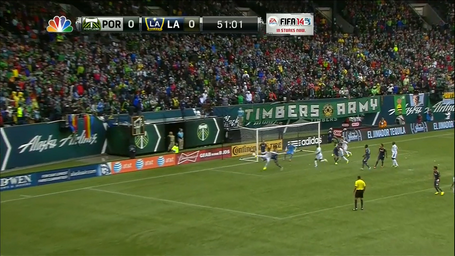 It turns out they did not so much have it under control. Yet it's hard to fault the players marking Urruti for what came next. Instead of just bringing the ball down, Urruti lunges in with a sort of kung fu kick and gives the ball a little flick with the outside of his boot. It really looks to be the only way he had a decent chance at getting around Franklin and Juninho, but that he thought to do it at all is a little surprising. (Just look at Franklin's reaction. You can tell he didn't see that coming.)

Kah is waiting in the box, as is Rodney Wallace, despite Todd Dunivant's best attempt to impede him by pulling his arm. They are ready to put  that ball in if it comes across the face of goal or to poach a rebound if there is one, but their services are not needed. 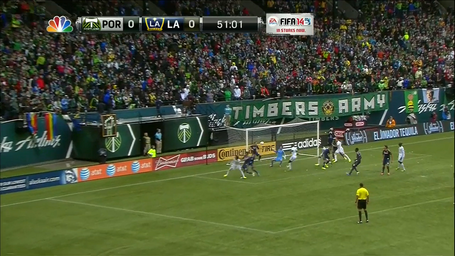 The ball slips into the net between Landon Donovan on the near post and Jaime Penedo, who is out of his goal without a clear purpose and can't get back to his line in time.

You know what comes next:

If this game was a look at what Urruti is going to be giving us--relentless pressure on the back line and the goalkeeper, improbable touches to make something out of nothing, and silly goal celebrations to top it off--then I think we'll all be very happy together.