Stumptown Breakdown: Back and Forth

The Timbers and the Whitecaps trade blows in a wild few minutes of the second half.

Share All sharing options for: Stumptown Breakdown: Back and Forth

With the Portland Timbers scoring in the 41st minute and carrying their one-goal lead through much of the second half, it looked like they might walk away with a 1-0 road win over the Vancouver Whitecaps for the third October in a row.

Then the game dissolved into madness. The Whitecaps leveled the game up on a Camilo Sanvezzo free kick. The Timbers, seemingly incensed at Vancouver for scoring and at themselves for coughing up the lead, took it right back the other way from the kick off. Here's that goal:

The Vancouver broadcast, which was used for both MLS Live and the highlights, doesn't show the beginning of this play because they're busy with a fascinating close-up of Camilo doing nothing. Off the kick off, the ball is dropped back to the defense and eventually finds Jack Jewsbury on the wing. 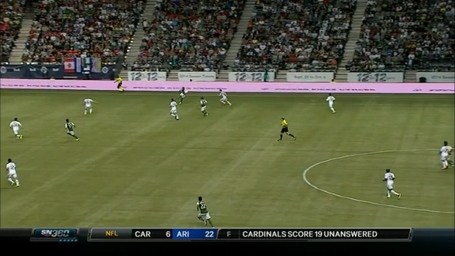 Darlington Nagbe (on the far side of the field in this frame, just left of center) brings the pass down, turns on the jets, and races upfield. 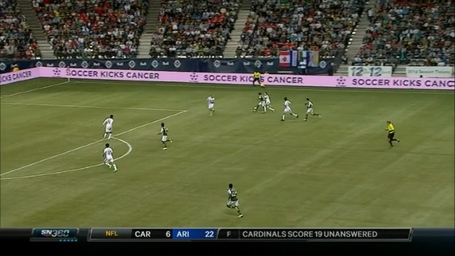 He shrugs off Vancouver's attempts to slow him down and drives into the box... 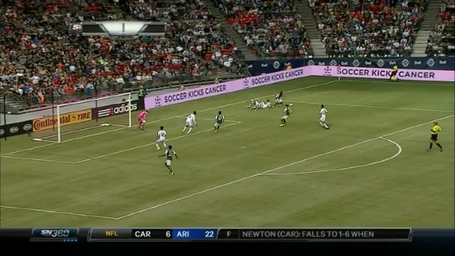 at which point both Jordan Harvey and Jay DeMerit slide in to try to tackle Nagbe, who simply pulls the ball back and steps out of the way. Then he picks his head up and sees the late run from Will Johnson. 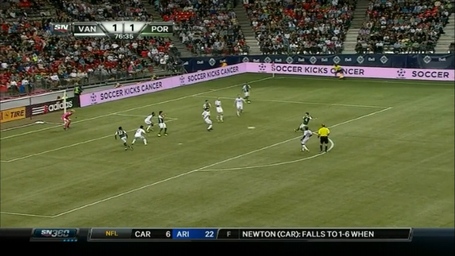 Above, Johnson arrives at the top of the box to hammer home the ball that Nagbe teed up for him. It takes a couple of deflections on the way through, and slips in right at the far post and well out of reach of David Ousted.

The Timbers had the lead again, but unfortunately the Whitecaps weren't done, and in fact seemed rather eager to show the Timbers that they too could score on the first play after the kick off.

Starting in the back, Vancouver puts together a good string of passes that eventually ends up with Darren Mattocks on the wing. 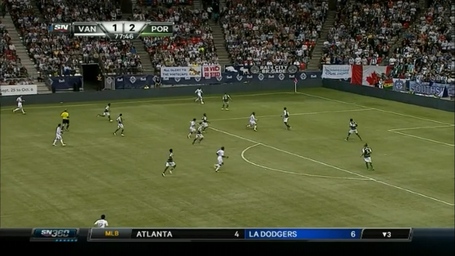 Mattocks uses his speed to get past Jewsbury near the touchline and sends the ball into the box. 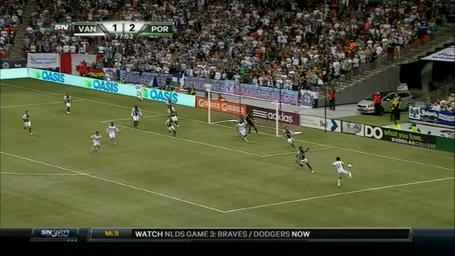 His cross misses everybody in the box and shouldn't be dangerous, but as Young-Pyo Lee receives the ball at the far side of the box, Camilo and Kekuta Manneh drop back into the space the Timbers' defense vacated as they rushed in to try to defend the first cross. None of the Timbers drop back with them, so Lee, with Wallace rushing in to close him town, uses his first touch to loft the ball back to where his teammates are waiting in space. 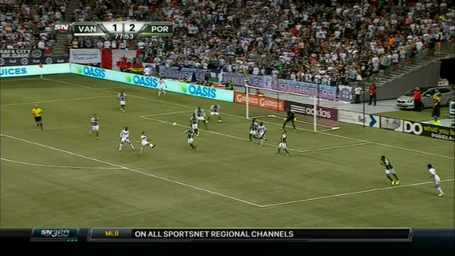 We all know what comes next. With all the time and space he could want to make his move, Camilo goes for the spectacular, and while Donovan Ricketts is so painfully close to getting a hand to the ball, Camilo's shot is perfectly placed about as close to the post as it could be without hitting it.

While Caleb Porter praised the Timbers for holding Vancouver off after their second equalizer and said that it showed maturity, the glass-half-empty view of Sunday night is that the Timbers gave up a lead--twice. Vancouver's first goal was a good free kick that took an unlucky deflection off Wallace, who was just trying to do what the players in the wall are supposed to do. The second goal though, after the Timbers had reclaimed the lead and were back in a position to claim all three points, was very preventable. While the Timbers may have showed maturity by not conceding a third goal, they showed a frustrating lack of concentration by leaving Camilo open in the box.

Ultimately the result is worse for the Whitecaps, who are teetering on the edge of elimination from playoff contention, but getting a draw instead of a win did knock the Timbers out of contention for the Cascadia Cup and deal a blow to their position in the Supporter's Shield race, none of which would be as frustrating if the Timbers hadn't had the win in sight and given it away.