Take a closer look at the goals scored against Portland in the last two games.

Share All sharing options for: Stumptown Breakdown: Goals Against

There have been a lot of goals in the Portland Timbers' two most recent games, some scored by us and some scored against us. In preparation for the hugely important match against Real Salt Lake next weekend (and because the quick turnaround didn't leave enough time to break down leg 2 against the Seattle Sounders) we're going to take a look at some of both. We'll start with goals against.

In trying to find patterns or recurring themes in the goals against the Timbers during the last few games, I've found myself on a subject I hoped I was done revisiting: set pieces.

Just like in the previous 4-2 loss, two of Real Salt Lake's four goals came from set pieces. Two of Seattle's came from long throw-ins and Seattle's only goal not from a throw-in saw pretty much the same defensive failures we're seeing on set pieces.

Let's start with Seattle. While those two goals didn't seem like a huge deal at the time--we still won, after all--they now feel like a warning sign that no one payed enough attention to.

Here is their first goal against us at Jeld-Wen Field last week:

DeAndre Yedlin may have been the one who put the ball in the net, but the biggest problem on this play is the poor marking of Eddie Johnson. 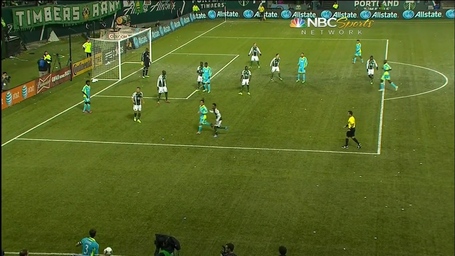 Before the ball is thrown in, Pa Modou Kah is on Johnson at the top of the 6-yard box. Futty Danso is looking over his shoulder at them, so he knows Johnson is there and Kah is on his goal side. With all other Sounders in the vicinity accounted for, what you might expect Futty to do is mark Johnson from the other side, and try to stop the ball from ever getting to him. That would have been very good defending. Sandwiched between the two center backs, Johnson most likely would have had a difficult time getting to the ball. Futty should have been able to win it with ease. 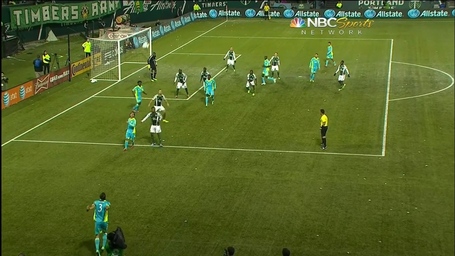 But right as Brad Evans throws the ball in, Johnson steps forward, Futty steps back behind him, and Kah drops off a little, letting Johnson get a free yard or two of space. Now both defenders are behind Johnson, neither of them marking him closely, and leaving no one to head off the ball before it reaches him. 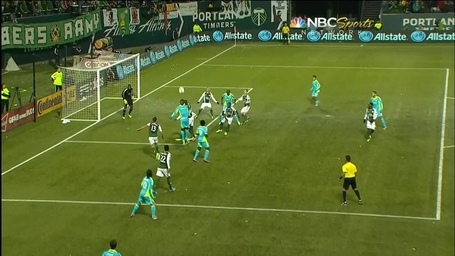 Both center defenders do try to win the ball in the air, but it's hopeless at this point; they've let Johnson get the better position. His header takes it over Futty and Kah. 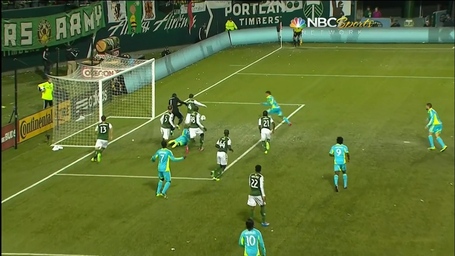 There's a bit of chaos in front of goal as Djimi Traore tries to put the ball in and Michael Harrington tries to clear it out. They are both unsuccessful and the ball slips between them to the back post where, as you can see in the frame above, either Donovan Ricketts or Will Johnson should seemingly be able to beat Yedlin to the ball. Unfortunately, it looks like the two Timbers might get a little tangled up and neither manages to get there before the Seattle defender does.

Once you have that pinball happening in front of goal, it becomes difficult to clear the ball. If either Johnson or Harrington had marked Yedlin instead of both being on Traore the goal might have been avoidable. But it would have been even better (and far easier) defending if Futty and Kah had shut Eddie Johnson down.

And now we move on to Sandy, Utah, where the defense that was so solid for the Timbers in September and October completely falls apart.

This is a quick and easy one to break down. 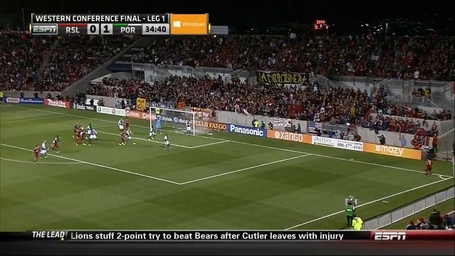 Here's the situation as Javier Morales sends the ball in. Every RSL player is marked. Everything looks good. 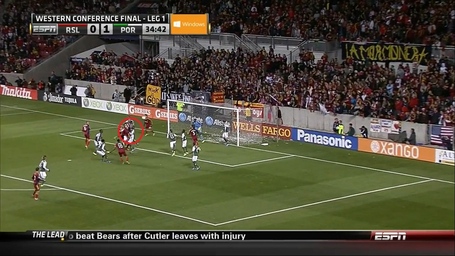 No one gets left unmarked this time, but Chris Schuler, in the red circle, out-jumps Futty by quite a lot.  It's almost as if Futty forgot that he should jump. It's hard to freeze the frame nicely when everything is moving so quickly, but you can see in the video or in the photo at the top of the article just how much higher Schuler gets. He scores this goal because he fights harder to get the ball.

(I expect someone might try to make this case, so I'll say right now that I do not think Schuler prevented Futty from jumping. He doesn't put his hands on Futty's shoulders or anything. Both of them are pushing and shoving a little, but then Schuler attacks the ball. Futty doesn't. Sadly, it was a rough night for him.)

Real Salt Lake wasn't done with the set pieces either. After a long period where they had clearly eased up on the attack, it actually looked like the Timbers might pull one back, cutting their deficit to just a single goal. But then the Timbers conceded a corner and Joao Plata got away from Nagbe at the near post. The ball took an unlucky deflection and beat Ricketts, and the Timbers season looked pretty over. Frederic Piquionne's goal definitely restores some hope, but an easier way to retain some hope would have been to not give up four goals.

After the Timbers first 4-2 loss in Real Salt Lake until the end of the season, the Timbers gave up no goals from dead ball situations (except for one direct free kick), and as a result they gave up very few goals. It seemed like the team had made marked improvement in that area. To watch them regress at such a crucial time is awful.

What was always so frustrating about their tendency to concede on set pieces, is that the Timbers very often don't give other teams many chances. Set pieces are sometimes the only way an opposing team can really get themselves into a game. In this case, a set piece goal was sort of a tipping point, because it was the start of an onslaught. As I said in my Postscript, once they stumble against Real Salt Lake, it's as if the Timbers just can't get their footing back.

I've always figured that if you could change a major event in a soccer game (if you suppose, for example, that a goal doesn't happen) then the rest of the game would have to play out in a different manner. So if the defending on that set piece is better and Schuler doesn't score this goal right then, Futty probably doesn't accidentally kick the ball off his own foot a few minutes later. The Timbers may actually sneak into halftime with a lead and have a chance to regroup. And then maybe they don't give up a goal right at the beginning of the second half. You get the picture.

Of course Real Salt Lake looked very dangerous before their first goal, and it's possible they would break through before the half anyway. But without some good chances on corner kicks, it seems very unlikely that they score four goals.