Last week's Breakdown was all about the goals the Timbers have conceded recently. Now it's time to look at the goals they have scored and how they can score many more against Real Salt Lake this weekend.

Share All sharing options for: Stumptown Breakdown: Goals For

Last week I posted a thoroughly depressing Stumptown Breakdown looking at where the Portland Timbers' defense fell apart in the last game. With the second leg of the Conference Final against Real Salt Lake coming up this Sunday, it's time now to look at so let's look at what has gone well and how the Timbers can score some goals.They'll need a few to beat Salt Lake on aggregate and progress to the MLS Cup Final.

We start with one of the lone bright spots in the first leg:

The goal is pretty straightforward--that was great play in the air from Frederic Piquionne, who catches Nick Rimando cheating a little too far to his near post.

What is worth looking at is Jack Jewsbury's role. Few people likely would have predicted Jewsbury would be a key part of the Timbers' attack in the postseason, but he now has two assists and has played a part in a few other Timbers goals, including earning the Timbers' a penalty kick against Seattle.

Jewsbury can clearly make good things happen when he pushes forward. He's probably the team's very best crosser, which Ryan Johnson and Piquionne have been able to take advantage of in the last few games. If the Timbers are looking for what's working on the attack, Jewsbury has to be on the list.

The other goal I want to look at from the past two games is another one in which Jewsbury played a part and where the Timbers did a lot of other things well too.

After an impressive spell of possession for the Timbers, Will Johnson plays the ball wide to Jewsbury. 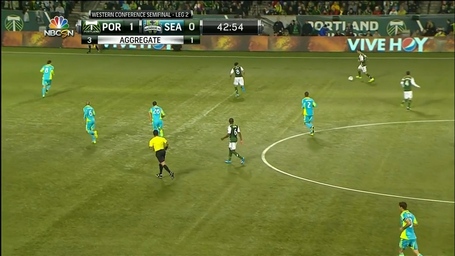 Jewsbury has Diego Valeri in space ahead of him... 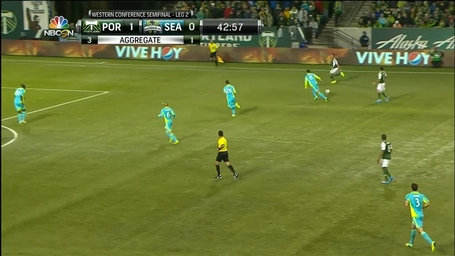 and the two do a little give-and-go. As the only player defending the two Timbers, Marc Burch is trapped in a bit of a game of keep-away. Commit to either player and he leaves the other wide open. But even when Adam Moffat catches up to the play, he and Burch don't successfully shut down the players on the wing. 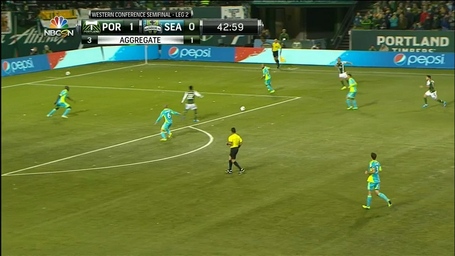 Rodney Wallace comes across to the edge of the box to receive a pass from Jewsbury and holds up the ball long enough for Valeri to make a run into the box. 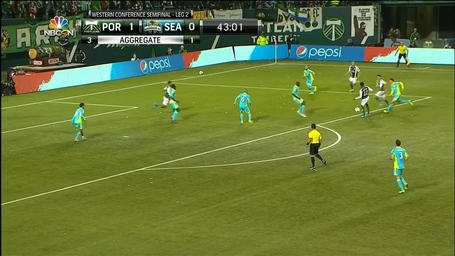 Wallace lays the ball off for Valeri as he arrives. 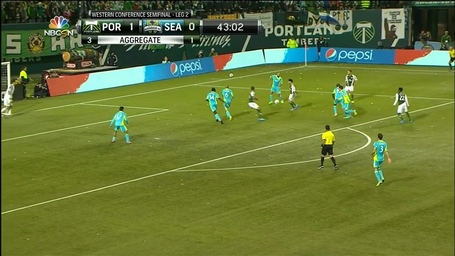 And Valeri brings the ball down in front of him. It's just a little out of reach, but his sliding finish takes care of that and he's still able to beat all the surrounding Seattle players to the ball.

This goal seems like pretty much everything the Timbers want to be doing on the attack and everything they needed to do against Real Salt Lake and didn't. The goal comes from just over a minute of pretty continuous possession by the Timbers. (Here and there a Seattle player stuck a toe in to poke the ball away, but it always found its way back to a green shirt immediately.) They keep the tempo of their passing and movement high, and they keep working on the Sounders' defense until an opportunity presents itself. They don't hesitate to seize that opportunity and they give the Sounders a lot to keep track of--Jewsbury on the flank where they know he can be dangerous, Wallace and Ryan Johnson in the box, Valeri running into the box. They find space well but as they get in to the box, Valeri also operates well in the tight space as the defense closes in.

This Sunday the Timbers need a lot more of all that. And absolutely none of this: 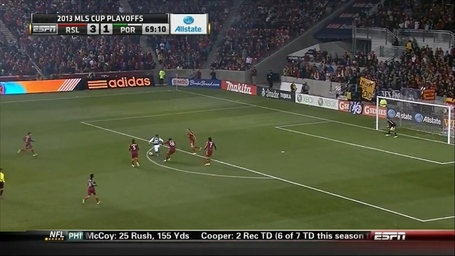