Darlington Nagbe doubles the lead for the Timbers with a smooth finish.

In the middle of the second half at CenturyLink field, the Portland Timbers doubled their early lead over the Seattle Sounders. The second goal was an important one for the Timbers, for reasons I've already discussed, and it was also a great team effort on the attack, finished off by an excellent bit of skill from Darlington Nagbe.

The play starts off on the Timbers' left flank, where the Timbers saw a lot of possession during the game. First Michael Harrington plays it out of the back for Rodney Wallace. Wallace holds the ball up while Nagbe runs up the sideline. 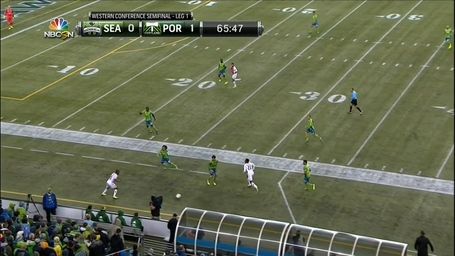 Now Nagbe receives the ball on the sideline, with five Seattle players in his immediate vicinity. 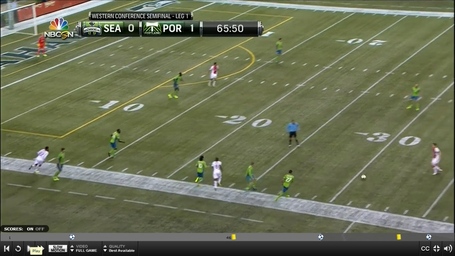 In the frame above, Nagbe drops the ball back a little to Will Johnson in the midfield. As he dribbles, he draws three Seattle defenders. The other two follow the run of Wallace. 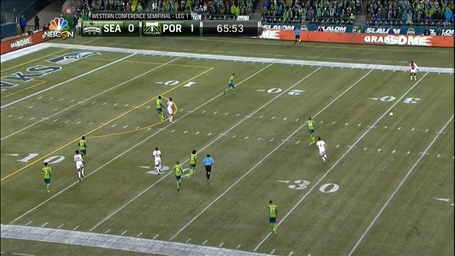 Johnson sees Kalif Alhassan pushing up the right side, and plays the ball square to him. With two easy passes, the Timbers have switched the point of attack. Since five Sounders were on the left side trying to deal with Nagbe and Wallace, Alhassan has acres of space to plan his next move. 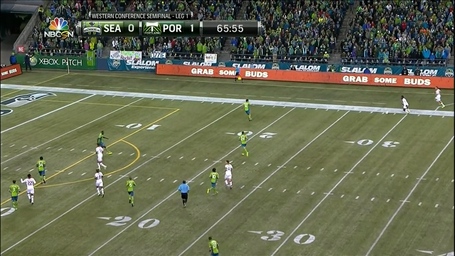 As Alhassan brings the ball forward, Jack Jewsbury makes an overlapping run. Leo Gonzalez waves Adam Moffat over to challenge Alhassan so that Gonzalez himself can shift out wide pick up Jewsbury. The Sounders had already been burned by letting him get the ball while he was open on the wings, and they didn't want to make the same mistake twice. By pulling a defender out wide to cover up, Jewsbury helps keep a path open for Alhassan; he just has to deal with Moffat, rather than facing a double team. 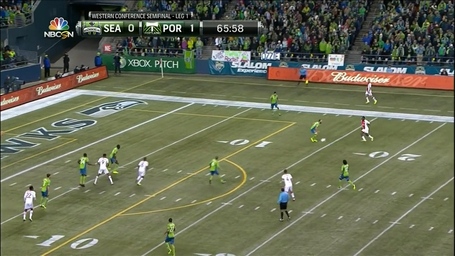 Meanwhile, Nagbe loses himself in the space between Osvaldo Alonso and Djimi Traore, both of whom are watching the ball and perhaps the overlapping run. Alhassan sees Nagbe and executes a Diego Valeri-like pass right between Moffat and Alonso, but not close enough for either of them to knock the ball away. 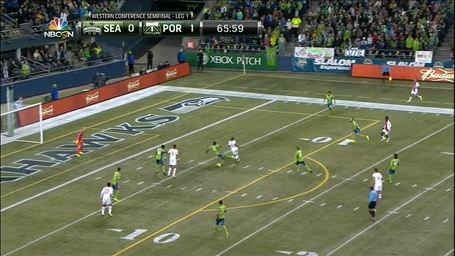 Then comes a truly horrible defensive play from Traore, who lunges in to try to tackle the ball away from Nagbe, but both due to Nagbe's speed and due to how he receives the pass, Traore never really has a good shot at the ball without kicking Nagbe first. If Traore makes much contact here, referee Baldomero Toledo almost certainly blows the whistle for a penalty kick.

But did I mention Nagbe's speed? If Traore makes contact at all, it's just barely, because Nagbe is out of the way so fast, leaving Traore on the ground behind him. (And to all the Sounders fans who have said that Traore must be a better defender than Mikael Silvestre since the Sounders saw both and picked Traore, I say: really?) 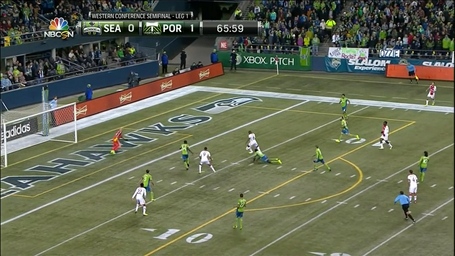 Now Traore has taken himself out of the play with his ill-advised tackle, and Nagbe has an open shot at goal, which he puts low and to the far post.

Though Caleb Porter's strategy of ceding a lot of possession to the Sounders sometimes made it feel like the Timbers were being completely dominated, it led to a handful of really good chances for the Timbers, who often found themselves operating in a lot more space in the attacking half than they are used to having. Meanwhile, they managed to mostly limit the Sounders to chances from set pieces and of course the one long throw-in from which they finally got their goal.

I would not expect the Timbers to be content with so little possession at home, so I expect they will try to see more of the ball. Hopefully that will cut down on the number of corners and free kicks awarded to Seattle. As much as the Timbers' set piece defending has improved, giving a team that many free kick feels like playing with fire.

Even if the Timbers are controlling possession tonight, the Sounders will commit numbers forward when they have the ball, giving the Timbers plenty of opportunities like those that led to their goals last Saturday night.