Looking Back at 2013: A Season in Photos

Stacey Neve shares some of her favorite moments from the 2013 season.

Share All sharing options for: Looking Back at 2013: A Season in Photos

Stacey has been shooting games all season for Stumptown Footy, so I asked her to go back through the photos she had taken and share some of her favorites. Here they are, along with her thoughts on why she likes them so much. -Will 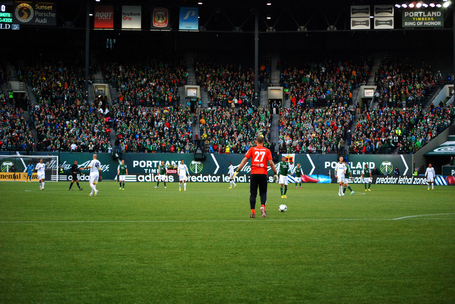 The first photo, from the Timbers preseason tournament, is a little sad. When I took it in February, it was just a picture of the awesomely full North End (during preseason!) spread out in front of the opposing team's keeper. But as many of you know, the player in this picture, AIK goalkeeper Ivan Turina, died in May. The first Timbers match after his death, there was a Swedish flag and a banner or two for Turina hanging in the North End, which I thought was a pretty moving testament to the ability of soccer to bring people together. 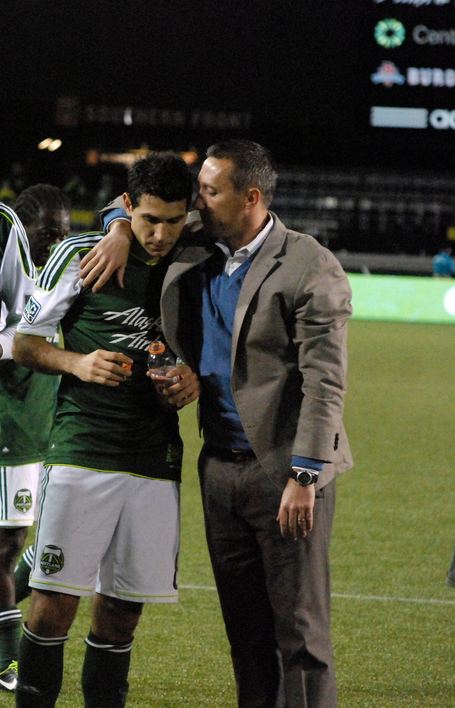 I took this photo after the final game of the preseason tournament. The match against AIK finished in a 1-1 draw and even though it was only preseason, the result didn't count for anything, etc., a couple of the players, Diego Valeri included, seemed pretty upset with the result. Ignoring all the post-game ruckus from the Timbers Army, Caleb Porter spent a few minutes seemingly discussing the game with Valeri. It turns out we got to see that same drive and intensity from the coach and the players all season long. 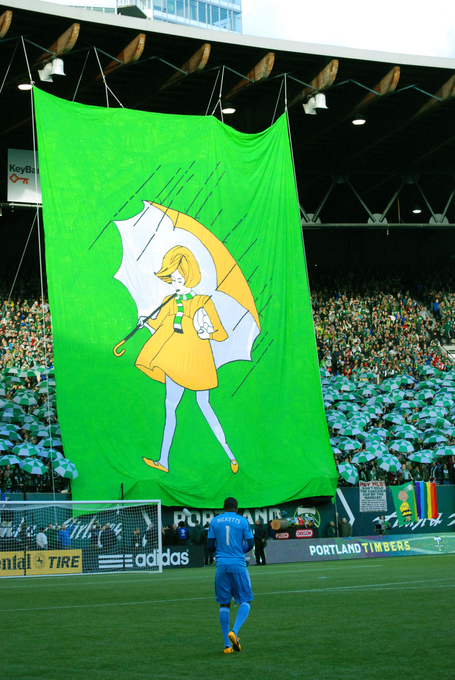 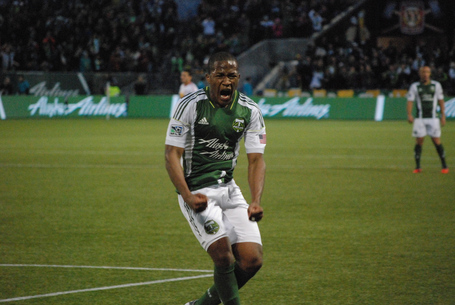 Porter said all thre right things before the home opener about not taking the New York Red Bulls lightly and not expecting they would win the game without a fight. But after the magic of the first games in 2011 and 2012, how many people actually thought the Timbers would lose their home opener? At halftime it looked like they might, but in the second half the Timbers came out swinging. Eventually Darlington Nagbe pounced on a rebound and scored, cutting the Timbers' deficit in half. In his celebration was a kind of intensity we hadn't really seen from Nagbe much in the previous seasons. He was back to work quickly though, because the Timbers still had one more goal they needed to score. 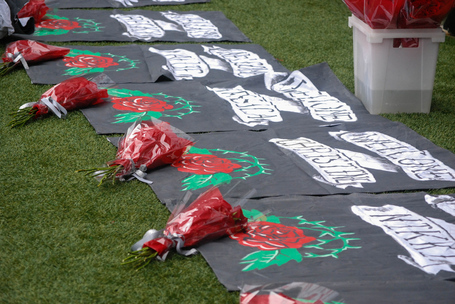 Fans welcome a new to team to their city. After the Portland Thorns home opener the Rose City Riveters laid out the pre-game tifo, along with a bouquet of roses for each player to take with them. It was pretty clear that the Riveters had far exceeded the team's expectations, and it was wonderful to see the range of emotions.... 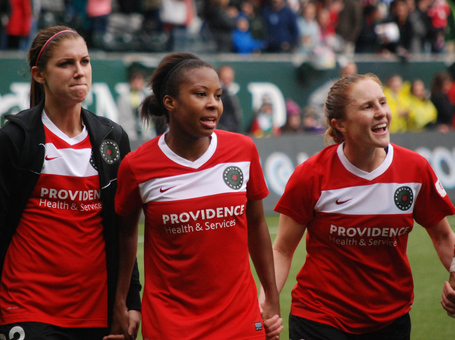 from the slightly teary... 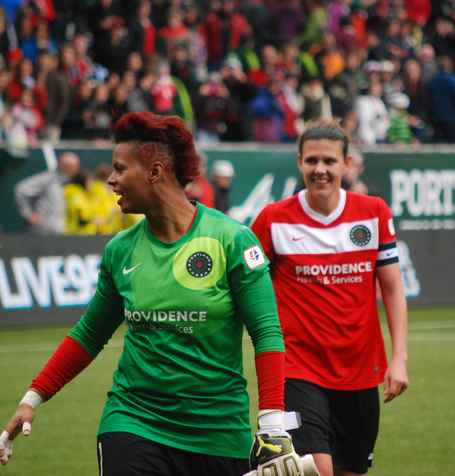 Back to the Timbers... 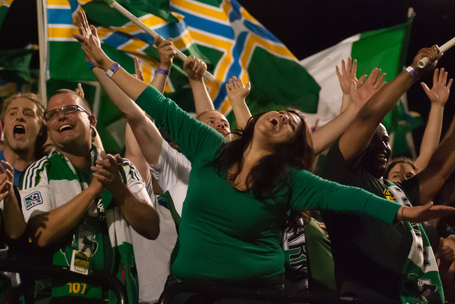 Everyone has said it, but it bears repeating: when Andrew Jean-Baptiste scored the stoppage time game-winner over the LA Galaxy, Jeld-Wen Field erupted, surely louder than I've ever heard it before. Here they are still celebrating, long after the goal went in and the final whistle was blown. 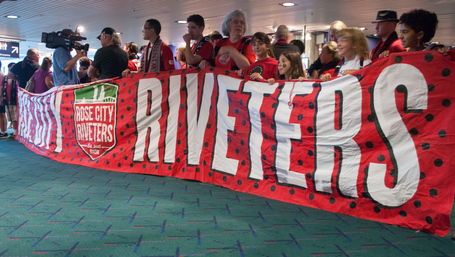 Half an hour or more before the Thorns' plane landed at PDX, a huge crowd had amassed at the security exit.  The group stretched from the checkpoint, around the corner to the escalators down to baggage claim. Travelers arriving on other flights took photos and videos as they walked through the aisle the fans had formed. A few people, wearing backpacks and dragging their suitcases behind them, joined the crowd to wait for the team. 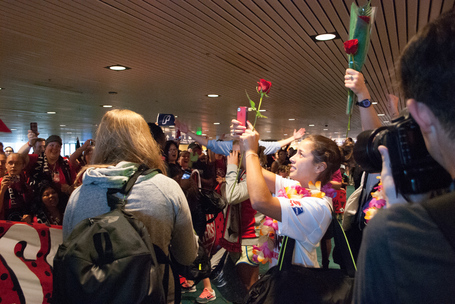 And when they arrived it was pretty much chaos. Airport employees has asked that fans try not to mob the team and try to leave a path for people who were not the Thorns to get through, which was a great idea in theory that completely fell apart in execution as the entire team pretty much stopped dead to take pictures, sign autographs. and accept roses and other gifts from the crowd. 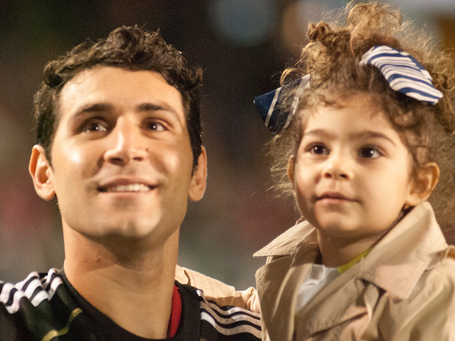 I've got nothing significant to say about this one. I just love watching athletes and their kids, and Valeri and his daughter are about as cute as they come. 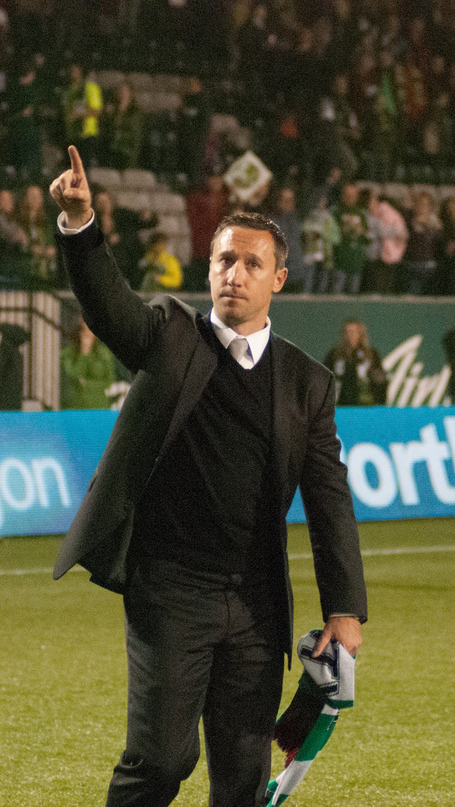 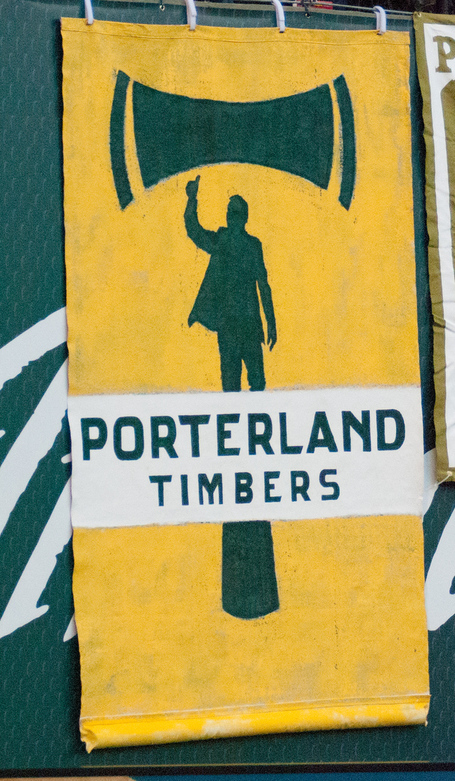 I didn't take pictures at all of them, but I don't remember a single home game where Porter didn't make the post-game walk around the pitch with the team to show his appreciation for the fans. These moments inspires on of my very favorites of all the flags and banners that hang in front of the Timbers Army. 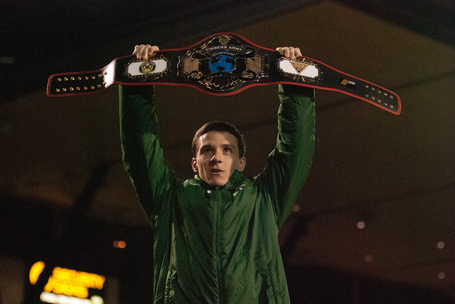 After all the he gave the Timbers in 2013, it was no surprise to see Will Johnson named Supporters' Player of the Year. His acceptance of the award, coming right after a disappointing 0-0 draw with Real Salt Lake, was understandably a little subdued, but the Timbers Army was not. The captain, who had really appeared to be playing his heart out that night, got big cheers from the North End. 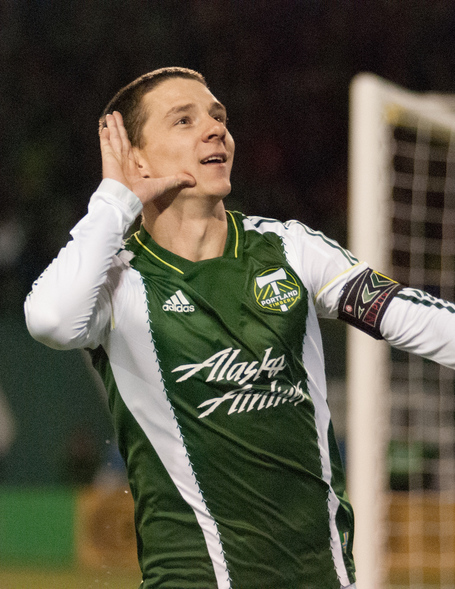 And in a classic Will Johnson moment, he solicits even louder cheers from the already deafening crowd after he opens the scoring in the home playoff match against the Seattle Sounders. 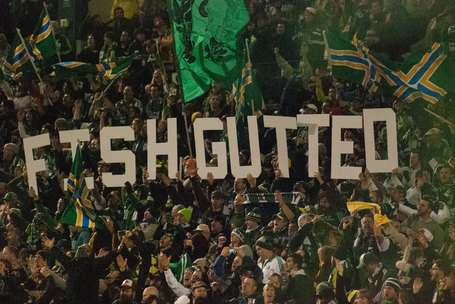 It was hard to rein myself in while selecting photos from the playoff game against Seattle, as it was undoubtedly one of the highlights of the season. 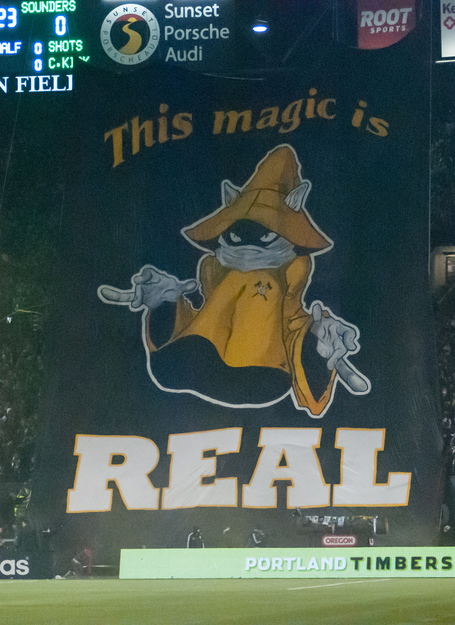 The tifo pretty much says it all.