Portland Timbers Training Quotes and Notes: All the Akron Midfielders

The Timbers held a closed training today at Jeld-Wen Field as they prepare for the Timbers preseason tournament.

Share All sharing options for: Portland Timbers Training Quotes and Notes: All the Akron Midfielders

While practice proceeded on the pitch at Jeld-Wen, the Timbers' roster continued to evolve today with the addition of Ben Zemanski from Chivas USA and and the acquisition of the rights to Michael Nanchoff from the Vancouver Whitecaps. The Timbers started things off with some normal warm up drills before getting into some passing drills that emphasized quick, smooth wall passes.

After the Timbers wrapped up their initial warm-up, the team closed practice to the press. According to Merritt Paulson's tweets, the Timbers played several intense practice games while training was closed.

Love the fight I am seeing in our practice games. Much more competitive than last couple seasons. This group looks hardened and wants to win

When the pitch was opened back up at the end of practice, the team headed inside but a group of young players made up of Mobi Fehr, Steven Evans, Sebasitan Rincon, Jose Adolfo Valencia, Ryan Kawulok, and Dylan Tucker-Gangnes. The group practiced breaking away from a defender and getting rapidly getting off shots on goal.

The Timbers will likely start practicing out in Beaverton in March after their grass field has had time to recover from the winter. Additionally, the Timbers have added 1000 sq. ft. to their training facility in order to expand their gym.

Andre Clennon, 23, a Jamaican striker who most recently played in Vietnam, began a trial with the Timbers today. Clennon has played both at forward and in the midfield, but team sources have confirmed that he is being brought in to potentially bolster the front line. 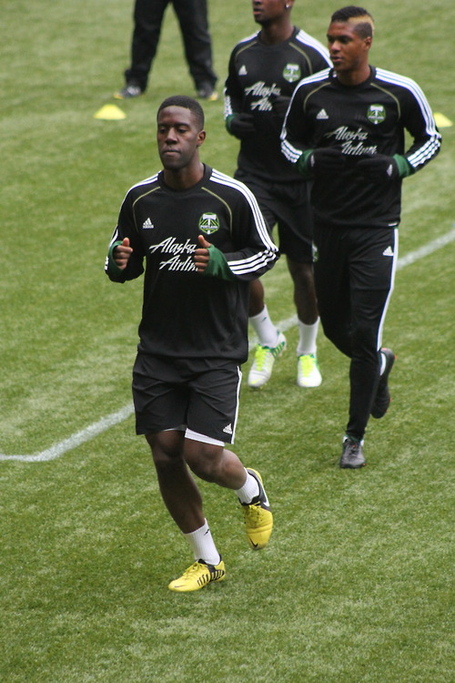 Trialists Calum Angus, Michael Nanchoff, and Deon McCauley, as well as unsigned draftees David Meves and Chris Hegngi, continued their time with the team. However, with the Timbers making a move for the rights to Nanchoff, you have to imagine that he will be signed soon.

In his post practice interview, Caleb Porter stated that Bright Dike and Brent Richards, both of whom have had knee surgery in the last two weeks, are out for the year, which could free up two more roster spots if both players are placed on the Long-Term Injury List.

Jake Gleeson has been held out of practice for the last three days with a sore back, but did make a brief appearance as the rest of the team headed inside. Gleeson went through some exercises with Mike Toshack and John Cone, and according to Caleb Porter could be back for Friday's practice.

Chris Taylor also made an appearance, riding an exercise bike on the sidelines and observing practice as he recovers from a strained MCL that could keep him out for several weeks. 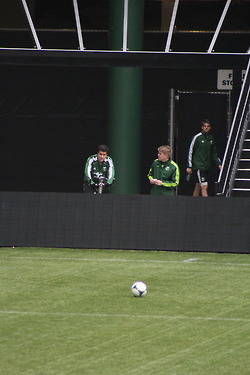 -Chris Taylor rides an exercise bike while Jake Gleeson does his best Bigfoot impression in the background.

According to Porter, David Horst could have trained today, but the team is being cautious and giving him time to recover from the groin pull he suffered in Tucson. The team expects Horst to be back training in the next week or two.

Jack Jewsbury remains out with a pulled hamstring and will likely be out for several more weeks, making him unlikely to be fit for the start of the season.

Darlington Nagbe, who missed the last two practices while on a media tour with MLS, was back at practice today.