"Without the ball we are a disastrous team, a horrible team, so we need the ball."

Share All sharing options for: The Three P's: Pressing, Possession and Purpose

The quote above was Pep Guardiola on Barcelona’s exploitation of possession, but I wouldn’t be surprised to have heard it echoing down corridors at Jeld-Wen Field around the time that Merritt Paulson was falling out of love with John Spencer.

Caleb Porter brought a reputation burnished by great success at college level, but with much still to prove to some. In putting his trust in Porter, Paulson was hitting the reset button. Much of what Spencer had put in place was reevaluated, with bold choices taken by the front office as they rebuilt the roster. Spencer left a lot of square pegs and round holes behind him, and so Porter and Gavin Wilkinson have had the job of replacing those that didn’t fit with ones that will. Quite why Spencer was allowed to build a squad in such a haphazard way in his first head coaching job seems crazy in hindsight, and correcting past errors has kept the front office busy.

But this is not simply change for changes sake, but rather it’s a byproduct of the more fundamental change that Porter represents, bringing a philosophy built upon three P’s - Pressing, Possession and Purpose.

High pressing has become a recurring feature of top-flight football. Barcelona are probably the team most think of as the most famous proponents, but many clubs deploy similar systems.

The sides will cover a lot of ground chasing the ball down. It’s not unusual to see individual players covering over 8 miles during a match, which would be only a little off an average marathon runners pace. A lack of athleticism can be the downfall of sides who attempt to implement a high press, resulting in conceding late goals or higher than average rates of injury.

Timbers fans have seen more than their fair share of late game collapses so far. Whether they were due to poor fitness, preparation or concentration, they came despite the club pressing less than they will under Porter. 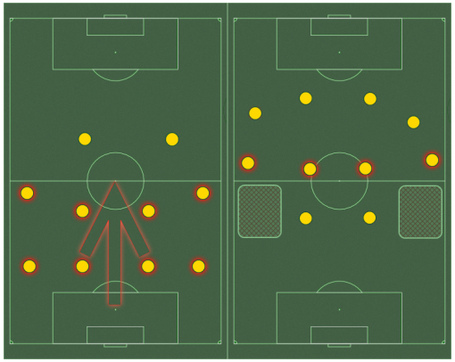 Spencer’s 4-4-2 relied upon denying opponents space in our half while pressing only lightly in the opposing half, where the other team couldn’t hurt us.

The real press would begin as the ball crossed halfway. The two banks of four work together to cut off air to the attack, and spring a counter-attack when they won the ball back.

What actually tended to happen was that the team would be caught with their full-backs pressed on, leaving space on the back line and leaving our players hurriedly chasing back to get in place.

The preseason matches have given the Timbers fans a sense of just how different 2013 will be in this regard. 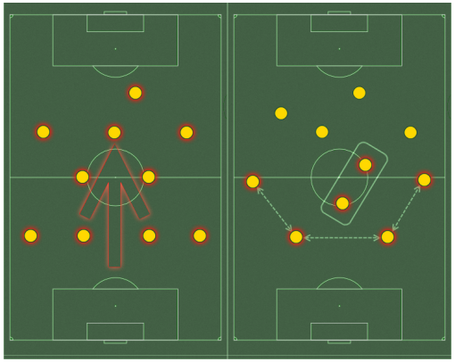 Whereas the strikers were only given the vaguest notion to press the ball under Spencer, everyone is responsible for winning the ball back under Porter. He also looks to use his full-backs to provide attacking width, but with a holding player covering in case of a turnover of possession.

Diego Chara and Will Johnson look most likely to occupy the two central midfield positions. Whether Jack Jewsbury can disrupt that pairing is a question that I’m sure at least a small part of Caleb Porter is secretly relieved he doesn’t have to answer for a while thanks to the captain’s injury.

Chara and Johnson have a potential to form the engine-room of the team as both bring a tenacious energy, married to solid foot skills. Game time together will only help them build up the understanding and chemistry they need.

When the Timbers get caught upfield now, there is space between the four defenders that could be exploited if there is no cover by at least one of Chara and Johnson. Having quick, hard-working outside defenders to cover back helps if Chara and/or Johnson are able to slow the opposition advance any.

Possession is often as much about defence as attack. Winning the ball back can be hard, as anyone who’s found themselves on the wrong end of a game of Keep Away can testify, so energy conversation is crucial. This strategic use of possession allows players to get a breather, while still remaining alert for an opportunity to transition to attack, and keeping the opposition working. Quick movement of the ball not only makes physical demands of the opponents, but mental ones too as they have to adjust and adapt on-the-fly to an ever-changing attack.

There are many teams who adopt a possession based game, but seemingly lose sight that the ultimate aim of the game is to score more goals, not have more touches. They keep passing in pretty triangles, well into the final third, and sometimes it works and they look fantastic, but against well-organised and disciplined opponents, it invariably doesn’t and they look self-indulgently wasteful.

This is why it's important to remember that possession is merely another tool at a teams disposal, and the key is to know when and how to use it.

Porter’s team have strung some pretty passes together in preseason, but their goals have tended to come from moves with comparatively few touches.

This sense of purpose in the final third is about more than playing direct, or ugly, in the final third. The transistion from a holding pattern, probing for gaps or seeking to push the opposition out of shape, in to an attacking stance is much more fluid and reliant of having good readers of the play, and players on the same page as each other. Diego Valeri has already shown his worth as a playmaker, and having a mobile attacking three ahead of him, there should be more chances created in 2013 by the Timbers.

Of course, this seeming improvement in attack has been matched by some all-too-familiar play at the back. Porter’s high-pressing, possession-based style has no room for passengers, and that leaves the Damoclean Sword of an lone individual error or lapse hanging over them.

Mistakes are to be expected this early on as players bed in and get up to match fitness, while getting to grips with new training methods and tactics. Mikael Silvestre adds a wealth of experience to the back-line, even if it comes at the expense of pace and potentially, given his age and some MLS surfaces, injury.

The defence is the area that poses most questions. It’s great to see Andrew Jean-Baptiste and Dylan Tucker-Gangnes getting playing time, and the addition of Silvestre to Hanyer Mosquera, David Horst and Futty Danso has us well covered, though the latter three have all had their preseason affected by injury.

Early indications are that Silvestre seems likely to go straight in. Jean-Baptiste started against AIK with Mosquera missing since a groin injury against San Jose. These three look be at the front of queue, leaving the future of Horst and Danso unclear. Tucker-Gangnes has to be considered after a solid preseason, but I expect him to rack up more playing time for the reserves/on loan this year. Both Horst and Danso have a long way to go to get back into the team.

Horst ended the season as first choice, but an injury at the wrong time has prevented him from properly staking a claim for his place. Danso has been consigned to the margins for long enough that you have to wonder whether the Gambian, who turns 30 this year, has any more MLS starts in his future.

Porter will be looking to see improvements in defence after seeing his team concede most in the four-way preseason tournament but with potentially three of the back four making debuts against New York, some bedding in time has to be expected.

There is a fourth P: Points. The last two seasons have seen 5th place in the West go to teams with 49 and 43 points, making a target of mid-40 points a reasonable, and attainable goal for Porter's first season. So, there are still issues in defence, a real worry about how badly an injury to key players like Valeri or Will Johnson may hurt the team and the front office's apparent lack of confidence in their attacking depth following the injury to Bright Dike, but overall the roster is in better shape than it has been since joining the league and in Caleb Porter they have a head coach who is clear about what he's doing, and just how to do it.

It's always the hope that gets ya...

Kevin Alexander is a lifelong fan of football, growing up supporting his hometown team of Kilmarnock in Scotland. Having married an Oregonian, he adopted the Timbers as his new team and has grown to think of himself as a Timbers fan first, Killie second. He enjoys watching, talking and writing about the game and his team, and runs the Slide Rule Pass site primarily to give his wife a break from having to listen him ramble on.