The quotes show it was a tough loss for Portland and a sweet win for Montreal. The stats show one team dominated while the scoreline shows that one team controlled the game. The Chalkboard shows why Montreal are tough to breakdown.

As a well known member of our community said "all loses are tough loses" so let's try and get past this one so we can talk about rivalry week. First let's get the quotes and official stats our of the way before we get to the chalkboard talk.

Thoughts on the match:

On trying to crack the Montreal backline:

"We knew it was going to be difficult, they are very organized. They weren't easy to breakdown; we had plenty of shots and a lot of possession. They're a team that if they get up on you, they can bunker down even more. Unfortunately, they got the first goal and that played into their hands."

On the play of the Timbers defense:

"We talked about the first goal and how important that was. We are making some mistakes that we can't keep making if we want to win games. Again, we let them hurt us twice in moments that we prepared for all week."

What happened on the goal:

"Just a great ball by Ben (Zemanski), and I just tried to make sure I was on the end of it and beat my defender to the spot. I just got a piece of it that I needed to get it into the back of the net."

On overall play two games into the season:

On the amount of shots the Timbers are creating:

"It's not a coincidence that two games straight we've shot more than 20-something times on goal. I think these are club records that we are setting and it's because we have offensive weapons. We're doing the right things, they (shots) are going to fall, we've just got to be a little bit sharper around the goal when it comes to those final passes. As times goes on, we'll be fine, I'm not worried at all."

"I think it was (Diego) Chara that played a good ball out to me. I just saw a couple guys on the back post and I just tried to get it there. Getting that first one against a team like that is definitely huge and it felt like the momentum was going to swing. Unfortunately we couldn't capitalize on it."

On the play of the team through two games:

"Whenever you have two home games to start the year and you only have one point, you've got to figure out a way to get win. Three points is huge in this league and there are a lot of games left for us to do it. We've got to get that first win."

"We didn't come in here and steal the three points tonight. We were solid defensively and had a lot of help from our midfield. It was a difficult and tight game, but we responded well."

On coaching in MLS:

"I come from Europe and everyone is a fan of football. I come here and I have a good start and we work very good together. I get by with my experience and also my ideas, but I know the other coach's work very well."

On a second-straight win:

"I know it's not easy to play in these two places, but I think we have the team that's capable of going on the road and getting results; six points is huge. It's a huge achievement for us on the road. We want to be good defensively, and our starting point is how we play defensively."

"We wanted six points on the road and we got it. It's no different than playing in any other game. Obviously there's a little more emotion to it, but it's one of those things where we knew they were going to come hard and we had to withstand it."

"That's a big rivalry for us, and I think we just have to continue our confidence and take to the next game and take it day by day."

On returning to Portland:

"It was different, a little surreal. Playing almost two years here and coming back and having to warm-up on the other end was a different experience for me."

I want to highlight a couple of things I found interesting when I looked at the Chalkboard for Saturday's game. First I thought it would be interesting to compare the heat maps of the two CB pairs. Next with all the hullabaloo about Troy Perkins I took a look at his Chalkboard stats -- what I found was interesting but really not that conclusive.

When comparing the heat maps for the CB pairings on both teams, you have to keep in mind that each team plays a different strategy, and that means you should see differences in the heat maps. What we should look at is how those heat maps show their strategy and if it worked or not. 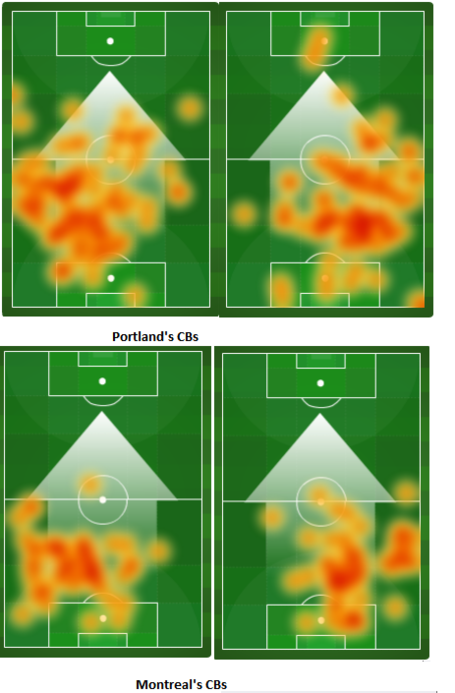 As you can see Montreal's CBs stayed compact and well connected. Just imagine their two outside backs next to them and 2 DMs right in front and you can see why they are a tough team to break down. When you look at Portland's CBs you see that they have to cover a lot of space, especially when they have one or both of the outside backs joining in the attack. The side to side nature of Portland's CB heat map is not what is so concerning to me, what is concerning is how deep they played.

When the back line plays a little deeper it hurts Portland's transition from offense to defense and vice versa. Couple that with a team that only had 5 players who have played on the same field together and it is a recipe for defensive mistakes.

Comparing the two goakeepers' Opta stats is hard to do in words so I will just show you the images. 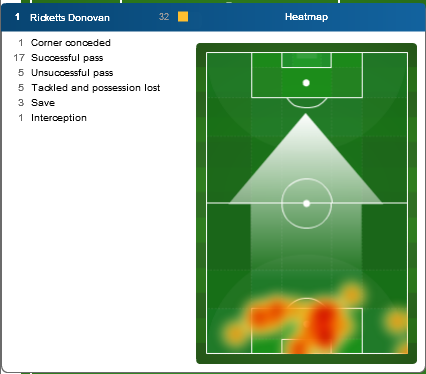 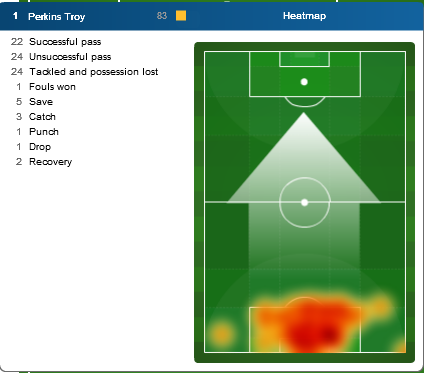 I don't remember Troy Perkins attempting almost 50 passes. Does that seem high to anyone else? It sure seems to me that Opta needs to find some different keeper specific stats, because some of these just don't fit. The stats, to me at least, show that both keepers had decent games and really showed how different they are or at least how different their teams strategies are. Yet you can't make any direct comparisons of who is a better keeper from these stats, and that is disappointing and one area I think Opta should address.