RECAP: Portland Battles Back to Earn a Point

Portland conceded early and let New York score three goals in the first half. The Second half was all Portland as they dominated possession and scored two to earn the tie.

Share All sharing options for: RECAP: Portland Battles Back to Earn a Point

Before the match even started you could feel the energy in the stadium build as the Timbers Army warmed up while the players warmed up on the field. When it came time for the TA to sign the national anthem they did so with their normal gusto but also with respect and it sounded like their best rendition to date.

For those who had not seen the tifo display here it is: 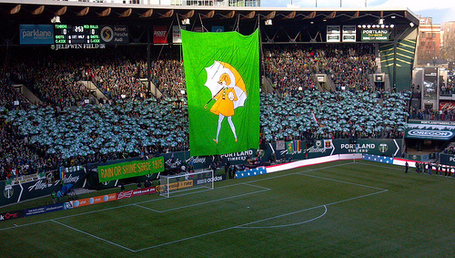 With 7 new faces in the line-up Caleb Porter and the Portland Timbers were hoping for results that were widely different from 2012. The start of the game was anything but as Portland made mistake after mistake in the first few minutes of the game. Most notably in the 9th minute Mikael Silvestre, who admitted his first half made it look like he was still in Paris mentally, tried a back pass to Donovan Ricketts.

Ricketts at the time was coming up to claim the loose ball and was not ready for the back pass and at first almost picked the ball up. Instead of picking it up he fumbled the ball right to Fabian Espindola who hit the ball into the wide open net to open the scoring for the New York Red Bulls

While the goal was reminiscent of the Timbers' season last year their response was anything but as the goal seemed to jolt the Timbers back into playing Porterball. After winning the ball in their half of the field Portland played the ball between the two CBs and then two Ryan Miller on the right. Miller beat one man with a deft nutmeg pass to Diego Valeri.

Having beaten the New York Redbulls first line of pressure Valeri had a lot of space and to turn up the field, which he did before being closed down 15 yards later. Once he was closed down he hit a great ball to Ryan Johnson who held it up nicely before hitting it wide to Nagbe but the pass was a little too strong and it almost went out to touch. Nagbe did chase it down and he turned and played it centrally to Will Johnson.

Meanwhile Kalif Alhassan started to make his way to the top of the 18 yard box arch. Will saw this and hit a first time pass to KAH who then hit it first-time to a crashing Valeri. Valeri's first touch pops the ball into the air, which usually would be a attack killer but not this time. With Jamison Olave closing him down Valeri hit back up into the air past Olave, chested it and then hit a right footed volley side netting.

The goal awakened the TA and added even more energy to the stands and to the pitch as the Timbers looked like they were flying. While the energy was there it almost was too much as Portland continued to give the ball away and got into a back and forth game with New York.

Portland's second mistake of the game came in the 24th minute and once again involved Silvestre. Kosuke Kimura had nowhere to go in his half and hoofed the ball forward where it bounced in front of Silvestre and then by him as he misjudged the ball. Standing right behind him was Espindola who was able to take the ball right into the box and score his second of the game.

Four minutes later New York scored their third goal of the night. New York had won a corner kick, and while Portland cleared the first ball, the second went wide to Heath Pearce, who hit a cross into the box. While this was happening almost all of the Portland defenders lost their marks and multiple New York players were wide open in the box, but it was Olave who put the ball into the back of the net.

While the first 30 minutes were all Red Bulls, the rest of the half and the rest of the game was all Portland. Up to this point in the game the Red Bulls had recorded 6 shots to Portland's 4 but this was about to change. As the half went on Portland stopped flying around the pitch and started to play Porterball.

Possession slowly moved away from 50-50 to being heavily dominated by Portland for long stretches. When they did lose the ball they were able to quickly regain possession of it with high pressure and finally some stout defending. In the span of 3 minutes Portland were able to record 4 shots, with 2 of them requiring saves from Luis Robles.

Portland was unable to find the back of the net but did set the stage for a great second half.

Portland continued where the left off in the first half with a lot of pressure on the ball and possession when they have the ball. It took Portland only 2 minutes to get their first shot on a counter but R. Johnson's shot was just high of the goal. The barrage did not stop there as Portland rarely let New York out of their half from that point on. To frustrate them even more Caleb Porter was able to find Nagbe's switch and turned him on.

Nagbe continually terrorized Kimura and anyone else unlucky enough to be defending him as Portland continued to look for their second goal. From the 52nd minute to the 56 minute Portland recorded 5 shots with the last one finally netting their second goal.

After a desperate clearance off the line by New York on a set-piece (While Andrew Jean Baptiste is taking his shot he is being dragged down but that is what we come to expect, oh and Taylor Twellman thought it was a PK) the Timbers gathered the ball played it passed it amongst the defenders and then back down the field. A few passes later and the ball is once again at the feet of Valeri and he is 25 yards out with time to take a touch towards the goal before he unleashes his shot. Robles is unable to keep the ball from rebounding right to Darlington Nagbe, who calmly puts the ball into the back of the net.

Portland wasn't done and they energy in the stands started to influence the play on the pitch. As the TA got louder and more into the game the Timbers energy increased while the New York energy slowly started to fade. Unfortunately most of Portland's attacks after the second goal did not result in any shots and it wasn't until the 80th minute when Portland started to really look like they were going to score.

Before the 80th minute one final chance to put the game away for good when Will Johnson tried to play a quick free kick. No one was ready for how quickly he took it and everyone was out of position and when New York pounced on the loose ball Thierry Henry was standing alone in the center circle on his side of the field. The ball was played up to him and he only had Donovan Ricketts to beat.

To the relief of all Timbers fans, and Will Johnson, Henry had a very heavy touch which allowed Ricketts to get to the ball outside of his box and clear it out of danger. Once that last opportunity occurred it was all Timbers and you could feel the goal coming. The equalizing goal finally came in the 83rd minute and it was a fruit of all the Timbers' hard work.

Rodney Wallace won a loose ball in the middle of the pitch and was able to poke it forward to Nagbe. Nagbe then took the ball to the top of the box and hit a rocket of a shot which was saved by Robles but he was unable to keep control of the ball and it bounced out towards the corner flag. Jose Aldofo Valencia was first to the ball and at the corner of the 18 yard box the hit a low cross into the the 6 yard box. The ball was hit so hard Olave was unable to get out the way or turn to make a play on the ball, and it bounced off of his leg and into the goal for the equalizer.

Portland continued to press for the winning goal and almost had it on an two separate occasions. One would have been goal of the year material when Ryan Johnson's bicycle kick went just wide of the goal. The other was again Ryan Johnson but this time his volley was saved by Robles.

Portland had to settle for a tie and while it was bittersweet it was more Sweet than bitter.