A look at what everyone, including the numbers, said about last Sunday's match.

MLS really wanted a game to showcase how far it has come in 18 years of existence and they got what they wanted in this game. I was on the edge of my seat the whole second half and I know a lot of others were too.

Thoughts on the match:

"We're still going through a little bit of growing pains, evolving into the team we want to be, but that second half, we were tremendous and for us to come back from two goals down and get a point, you know again, disappointing we couldn't get the win because we had chances to do it, but we'll take it and we'll get back to work tomorrow. We'll get ready for Montreal, looking forward to that game, and I know this group has three points in mind going into that game."

"Two of the goals we basically gave them, there wasn't anything they did to earn them; we gave them to them. We basically handed them two goals on a platter and that's basically what cost us three points"

On the Timbers' second-half comeback:

"A huge part of our comeback had to do with attacking the north end with the Timbers Army sparking us on. They were behind us 100 percent, and they were like a vacuum sucking the ball into the back of the net in the second half."

On what he told the Timbers at half time:

"First thing I told them is that they can't do anything about the mistakes. They've got to put that behind them. When I first walked in they were a bit down, no one expected the game to be where it was, 3-1 at halftime, but we needed to put it behind us. We needed to focus on what we were going to do to pull the goals back and to get a result. Mentally they did that. We certainly made a few changes and I thought the guys that went into the game gave us a lift."

On the performance of Diego Valeri in his first MLS match:

"He was tremendous. He is worth every penny. He's gifted. He's capable of pulling a rabbit out of the hat at any given moment. He's very clever in tight spaces and he can unlock teams. He's going to be a handful this year as well."

On what head coach Caleb Porter said to the team at half time:
"Caleb came in here and said if there was a betting booth going around that he'd put a lot of money on us to at least get a point out of this game, if not win it. We knew if we could get one, that they'd be thinking that we could come get two."

On the first-half mistakes that lead to two NY goals:

"You know we all make mistakes and they unfortunately cost us a goal right off the bat, so that rattles you. It is unfortunate, the timing wasn't great, but the way that we pulled back together says a lot about this group."

On the team's play in the second-half:

"We pressed them. We locked them in their half and got a lot of chances and created some good goals. We've done that a lot throughout the preseason, but we haven't put together a full 90 minutes yet, that's the disappointing side of things. The things that we have been able to do though for stretches of games has been nice."

On the difference of the team's play in each half:

"More guys were fighting. Will Johnson's been saying ‘we've got to fight, we've got to fight, and if we fight we're going to win games,' so that second half we fought, and we were just hungry, that was probably the big difference."

On the team's chances of coming back, being down 3-1 at halftime:

On his first goal of the season:

"I think it was Valeri who got the shot off, and I just took a chance and ran in there to follow it up. The goalie muffed it up and, I almost missed it but luckily it went in."

Initial thoughts on the game:

"Very excited, very happy with the way we started the first half. We let an opportunity slip away from us. If you would have asked us a week ago, 10 days ago, if we would like to take a point on the road of the opening game in an environment like this and a good team like this maybe you say yes, maybe you make a deal with the devil and you say yes, but at the end of the day you're on the road. But possibly we let two (points) slip away."

On Portland's environment and crowd:

"It's phenomenal. It's the one thing I said to the guys before the game. I said that I'm very envious right now, because they get to go out and play in an environment like this doing something that they love and they showed it in the first half and in the second half their fight, their battle. Portland's a good team, and they threw everything at us. We defended like hell. At the end of the day, we'll take a point."

On the second half:

"I just think that we possibly came out with the mindset that we should save the lead instead of keep doing what we were doing in the first half. That falls on the coaching staff first and foremost. Maybe we should have made it clearer ... At the end of the day they battled, and there are guys in that locker room that are crushed right now. To see that type of attitude and that sort of letdown after scoring three goals on the road and getting a point on the road, which in MLS is very difficult to do, it's great to see them pissed off."

"He brings so much to the table and the reason why he came off is because he runs and works so hard that he was just dead. That was a reward for him, after all the work he's done. Come off and have a rest my man, great work."

On the change of tempo in the second half:

"You can attribute some of that to the Timbers Army, but we played a little deep. With a two goal advantage, we wanted to be able to take the game to the end, but unfortunately they dictated most of the second half, and that's going to make our life a little more difficult."

"We were trying to put pressure on them, and then a couple of mistakes and just score after that. We tried to defend well, but they have a good team."

On getting a point on the road:

"I don't think anybody is happy right now, because we had it, and they scored in the 83rd (minute). We could have lost too, like I said, they are good."

This is where it gets interesting. First the game stats:

Now for the interesting stuff. A blog called Tempo Free Soccer set up a table that calculates a variety of things but the most interesting thing they calculate is the amount of passes per possession. 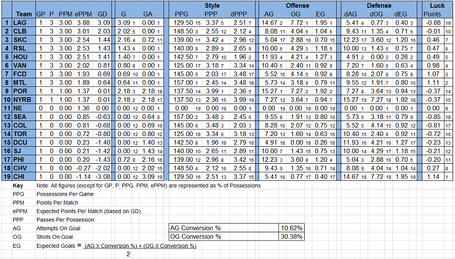 Portland averaged 3.99 passes per possession and this is a full .5 higher than the next team. This might not mean much but it will be very interesting to track over the course of the season.

Here are a couple screen shots of the possession stats on MLS Chalkboard. Comparing the two pictures you can see that New York's possessions were started and lost in their side of the field. Portland on the other hand is much farther up the field. When you over lay the two it is almost 20 yard difference and it shows how deep Portland had the Red Bulls pinned for much of the match. Overall the stats point to a much different game than the 3-3 scoreline suggests.