Diego Valeri, Darlington Nagbe Make Team of the Week; Valeri Up for Goal of the Week

Both players made a national impression of themselves during Sunday's game against the New York Red Bulls.

Share All sharing options for: Diego Valeri, Darlington Nagbe Make Team of the Week; Valeri Up for Goal of the Week

Perhaps not a huge surprise, but both Diego Valeri and Darlington Nagbe have made MLSsoccer.com's Team of the Week wherein the editorial side of MLS takes the best 11 players from the weekend's games and creates one super team. Diego Valeri, specifically, was a no-brainer pick as he was absolutely instrumental in everything moving forward against the New York Red Bulls. Darlington Nagbe had a great game as well.

Here's the full team of the week: 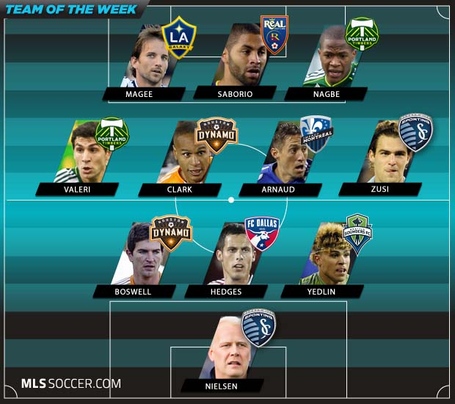 Perhaps more surprising is that Will Johnson didn't make the team. I don't know how well Ricardo Clark played in his game against DC United, but Johnson was absolutely instrumental in Sunday's game.

In other, but related news, Valeri's stunner of a goal is up for Goal of the Week honors. If you've got the time, I'm sure your vote would be very much appreciated. Obviously there's still a lot of games left to be played this year, but it's not inconceivable to think his goal could be Goal of the Year material as it's just not something you see everyday in MLS.

What do you think of Valeri and Nagbe earning team of the week?