The Academy, The Timbers, and The French

A select group of players from the Portland Timbers Academy trained with the first team for the last two weeks. Come in and find out what they have been up to and what it has to do with the French.

Share All sharing options for: The Academy, The Timbers, and The French

Cameron Knowles took charge of the academy players and ran their practices, although Sean McAuley and Amos Magee both spent some time with the Timbers youngsters as well. Academy Director and U-16's head coach Mike Smith was on hand to observe his players as well and talked about what he hopes that the academy players get out of the experience.

I think we have got a unique set up here. I think that training every night on the field next to the first team field shows that we are a club, but the fact that they are training at the same time as the seasoned pros and can see them through the fence, it shows that they are just a little bit closer to that end goal of becoming pros themselves and to hear the first team coaches sending the same message that they are hearing week in and week out but in a different voice will hopefully help it sink in a little bit more. 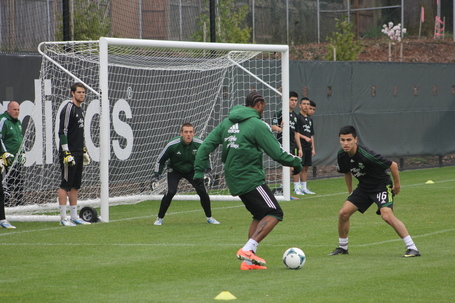 The academy players spent most of their time training on the turf field at the team's Adidas Training Facility in Beaverton, joined by two or three of the younger Timbers, while the first team trained on the grass field next door. On several occasions, however, the two groups merged and the Timbers academy players took on the players from the first team, generally acquitting themselves well. As Mike Smith noted, "they didn't look too out of place."

Cameron Knowles shared his thoughts on having the academy players train with the first team as well:

Its a good experience for them to be integrated in with our players and to see what it takes to be at the next level, and it is good for us to see what is going on with our academy players, how they are developing. It is part of that vertical integration of the club that we are looking for. The academy is going to be important for the first team moving forward.

Of course, it is not only the goal of the academy players to become professional soccer players, it is the goal of the academy to produce players who will go on to play the professional game. To that end, Major League Soccer sent an academy coach from each team, including Mike Smith, to the famed Clairefontaine academy in France as part of a partnership with the French federation.

Smith elaborated on his time in France:

The idea is that it is a French player development license that is a ten week course over a year and a half, so it is something that we have to pass... The first week was really just an introductory theory week. We did a lot of study of the French coaching method and what they do in their coaching sessions.

At Clairefontaine, Smith observed the French U-13's and U-14's at training. As a part of the second week of the exchange, Smith went to study at the academy of Paris St. Germain where he observed the PSG U-17's, U-19's, and reserves.

It was inspiring to see the level of some of their young players. PSG had a seventeen year old who they had been offered 2.5 million by Chelsea for, so it was just interesting to see the way they do it.

Smith, who recorded the PSG training sessions on his phone to share with the rest of the Timbers' coaches, will now have to begin the process of translating what he learned in France to the wildly different sporting environment here in the US.

Although the player development course is spread out over one and a half years, Smith already has some new ways of doing things that he has brought back from France. The Timbers Academy already has access to nutritionists, trainers, and other resources that many American soccer teams do not, but much of what Smith took away from his first two weeks of the course had to do with the implementation of video technology and sports science, something that Timbers' Director of Sports Science John Cone will be very involved in.

There were other, more basic, differences as well.

The French training method seems to start most practices with a game of some kind, as opposed to the dynamic warmup that we would typically use here.

According to Smith, some of those changes could be implemented later this year as he reports back on his progress with the French training style and continues his work in the course.

Even as the Timbers continue to develop their academy program, the team has some potential stars on the horizon. By this point Rubio Rubin is nearly a household name among Timbers fans looking to the future as he has been among the best players on the US U-17's for two years now. He is not the only academy player with potential, however. According to Smith, the U-13's and U-14's currently have two players overseas training with Dutch club Ajax. 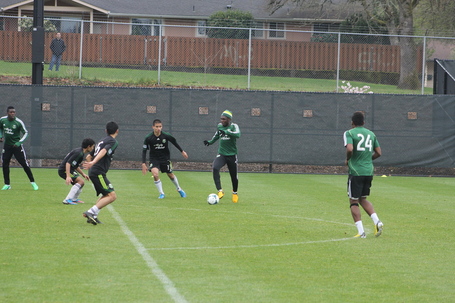 The academy training centers spread out across Oregon and southern Washington will aid with discovering potential talents, according to Smith who added, "We have got some special players, so I think the future is bright."

The Timbers are in a unique situation with their academy and U-23's providing a direct path into the first team, one that has already been followed by Brent Richards and Steven Evans. That "vertical integration" will help the team to find and develop those special talents who might otherwise end up unnoticed and was stressed by both Knowles and Smith.

Smith was quick to praise the opportunity for his academy players, saying, "I think this is a really unique opportunity for these guys. I think it shows the commitment of the organization to the vertical integration... It is great for these guys to just train side-by-side with the reserves and look up to the professionals that they aspire to be."

Knowles also acknowledged the opportunity for the academy kids, "they're developmental players and they have got a long way to go if they want to be professionals and that is part of the developmental system. Eighteen kids in an academy team, they are not all going to become professionals. We want to help develop them to give each one of them the best chance."

The Timbers Academy U-16's and U-18's each play five of their six remaining games this season at home. (Check out their schedules here.)