Will the absence of Alan Gordon help or hurt the Portland Timbers in their second match in a row against the San Jose Earthquakes?

Share All sharing options for: The Earthquakes Without Alan Gordon Could Pose Different Challenges for the Timbers

Even before the league handed down a three-game suspension to Alan Gordon, the Portland Timbers knew they would be facing a Gordon-less San Jose after the striker received two yellow card Sunday night. His absence will obviously impact the rematch between the two teams this weekend, but how and to whose benefit?

The most clear advantage for the Timbers in the situation is that not having Gordon available to start or come in off the bench leaves the Earthquakes with a little less fire power. The forward scored the second most goals for the Earthquakes last season, including five after coming in off the bench, and led the league in goals per 90 minutes. The Timbers did an exceptional job handling San Jose's three leading goal scorers last weekend, but on the Earthquakes home turf, they'll be happy to have one less tall, physical striker to grapple with. (And if the score is even or the Timbers are ahead, they'll be glad San Jose doesn't have Gordon on the bench to come in and play the role of the closer, which he did so well so often last season.)

Somewhat less clear is how his absence will affect the physicality of the rematch. Last weekend's match saw a lot of overly physical play and reckless challenges and probably no one contributed more to that than Gordon. One would hope that the suspension of Sunday's biggest thug might allow the teams to partake in a soccer game instead of a brawl. That's what the optimist hopes for anyway.

Of course the alternative outcome is that someone else will fill that void, and the earthquakes certainly have a few players who could step up. Steven Lenhart was uncharacteristically quite last weekend, but that probably won't last. Usually his antics are a key feature of any game with San Jose. Without Gordon on the field, we're likely to see more of Lenhart, which brings it's own set of concerns beyond just the risk of injury to the Timbers. The problem with Lenhart is that he seems at least as likely to provoke someone else into getting a card as he is to get booked himself. The Timbers will be fortunate to have one less "bash brother" to deal with, but the Timbers center backs will need to be prepared for his mind games.

For the Timbers, the most concerning implication of Gordon's suspension is that Chris Wondolowski will now likely play up top, instead of on the right wing as he did in the first game. After that unimpressive display from the Earthquakes, head coach Frank Yallop may have made that change anyway, but now it's all but certain in light of Gordon's suspension. Wondolowski had played as a forward in every single prior game this season and it's actually a little confounding that Yallop approached the game as he did in terms of the line up and formation.

If you were on the match thread or watching at home last weekend, or if you follow Mike Donovan on Twitter, you probably caught this fun fact before the game: last time San Jose started the trio of Wondolowski, Gordon and Lenhart, the Earthquakes walked away with a 4-1 victory over the Colorado Rapids and Wondolowski scored a hat trick. And when you heard that, you probably felt an emotion somewhere on the spectrum of mild concern to outright terror. That is not an unnatural response, but let's look at the game a little more closely, specifically the involvement of Lenhart and Gordon. This is quite easy, because you see they did not do very much. Neither of them scored and neither assisted on any of Wondolowski's three goals--or, for that matter, the non-Wondolowski goal scored by Martin Chavez. Playing a combined 155 minutes, they attempted only 54 passes and 4 shots, though admittedly they did win an impressive 17 headers. For perspective, in their win prior to that game, on the road against the Seattle Sounders, the pair attempted 48 passes and seven shots, even though Lenhart came on as a sub and they played a combined 115 minutes.

Wondolowski obviously had quite an impact on the game. Even though he was nominally a winger in that match, the heat maps below show that even in that 4-1 over Colorado, Wondolowski's heat map closely resembles a game played in his normal forward position.

The game against Colorado is shown on the left. The heat map on the right is from the Earthquakes' 2-1 win over the New York Red Bulls on March 11. Though the spots on Wondolowski's heat map from Colorado are slightly more concentrated on the left wing where he was theoretically playing, he also drifted into the middle frequently, and sometimes all the way across the field. Compare that to his heat map from last weekend. 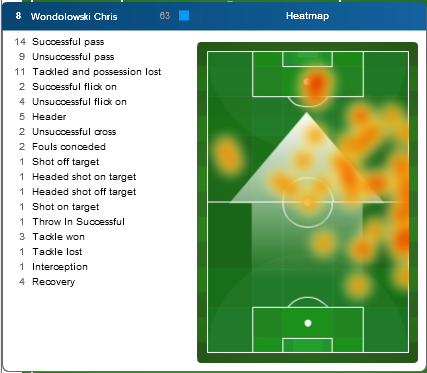 Here his touches are heavily clustered on the right side of the field, and very importantly, generally a ways from the 18-yard box.

All this is a rather round about way of making the point that it isn't as if San Jose found some secret recipe in playing those three together and that's why they won 4-1. They were simply a strong team, the season's strongest team in fact, playing a weak Rapids team. Most of their success over the course of the season came when Wondolowski played up top and centrally, alongside Gordon or, more often, Lenhart. In this position Wondolowski becomes the focus of the attack and is always in a good position to receive the perfect pass or poach a goal if given the opportunity. Really, the formation Timbers will likely face this weekend is their recipe for success.

This Sunday, Wondolowski will be back up front, likely alongside Lenhart and right where he scores most of his goals. He'll be the focus of their attack once again, and this time he'll be less impeded because he'll be freed from the duty of defending Michael Harrington, which, as Ryan pointed out earlier this week was just as effective as Harrington's defending in taking Wondolowski out of the game.

None of this needs to spell doom and gloom for the Portland Timbers, but even though they are playing the same team as last week, the boys in green can't go into this game thinking it will look familiar.