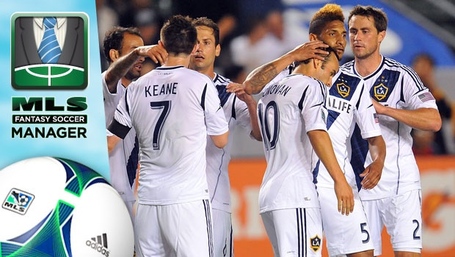 Until we get our dedicated fantasy wizard back, I will continue to post some thoughts and insights for your management pleasure. Full disclosure, I'm not winning this thing. I didn't know what I was doing when I started, this being my first year, and I still seem to make some large mistake each week.

Last week: NYRB's Juninho. Man got pissy and decided to kick a ball at SKC's keeper (who collapsed like the ball was made of bricks). He got an immediate red card and missed the second match of the week. And now, the ruling has been passed down that he will miss an additional game this week. Get rid of him? It's worth considering, unless your midfield is already stacked.

The discussion continues about where to put your money: forwards, midfielders, defense? As an MBA student, I am learning about various investment strategies. One key ratio I've learned in the last week is known as the Sharpe Ratio: the amount of expected return for every unit of risk. It's not that much different than managing your fantasy roster: each week, you are risking your 100+ million on 11 players, hoping for a good amount of points.

Here are two ways to maximize expected return for investment:

1. Pick between two players with an identical $ value. Choose the one with the highest points. Or, if you want to geek out, get statistical on this beezy and create a histogram for points per match from each player and determine the mean points per match and the standard deviation. You can waste a ton of productive hours doing this for each player, and we will rightly praise you for sharing with the rest of us.

Here's a teaser of this in practice:

Aurelien Collin is the highest paid defender while Dominic Oduro is making a pithy amount among forwards. But, for the cost, he has the most points. I think you will find by doing this that the bang for your buck comes with defenders, not forwards.-

2. Do some math between two players of differing $ values. Divide the # of total points by the $ value of the player and compare the ratios. But I guess it should be slightly more complicated than that because you need to factor in the # of games played.

Here is how this could work out in practice:

Aurelien Collin (highest points defender) has scored 62 points in 8 games for a cost of $6.6m.

Jack McInerny (highest points forward) has scored 41 points in 7 games for a cost of $8.4m.

The money is in defenders. It's easier to calculate it the second way, but it is way more nerdy/exciting to find the expected points per game from these various players and make some decisions. I guess you could combine the two if you so desired (I desire you to, if you will share).

So I'm going to drop Ryan Johnson who is taking up (wasting) about $8.1m on my roster (this is based on my trade in value), and then spend that money on a midfielder. Landon Donovan hasn't played enough for it to be fair to do any of these ratios, but he is looking hot so far. He won't cost less than he will this week at $9.9m, and my back line is already stacked. That means kicking off Juninho, and getting a cheaper forward. Would Jack McBean be a good call? He seems to still be getting minutes, but I can see him getting the bench when LA has Keane back.. Either way, I'll probably make out in the future.

Another consideration for those of us with quick transfer fingers: watch out for players who will end up worth less and less. Having a player on your roster who is getting 0 minutes means he will go down in value. This makes it harder to rid yourself of him for someone better. It may be worth taking two players with iffy performance for one solid performer and one non performer. Something to consider - I'm not smart enough to act on this.

Did you know that NYRB are playing Toronto? Don't get rid of your NYRB players just yet, methinks.

A Philadelphia player or two may be worth your money this week as they are arguably going to play the worst team in the league, the NE Rev.

FC Dallas will probably leave their next match vs Vancouver with another clean sheet. Play those defenders.

Is it wrong to put in players competing against the Timbers? You ask, because everyone and their mother is planning to start Collin and Zusi. I think God is forgiving of this choice for two reasons:

God shall not forgive those transgressions, so dump Wondo. You should already be planning on doing so, now knowing how to invest wisely with the Sharpe Ratio. You are welcome.

Let's get lively this week: Any smart pick ups? Any injuries or suspensions you think we should watch out for?

Also, feel free, Ryan, to post this on the main page, should you desire. I did do math, after all ;)