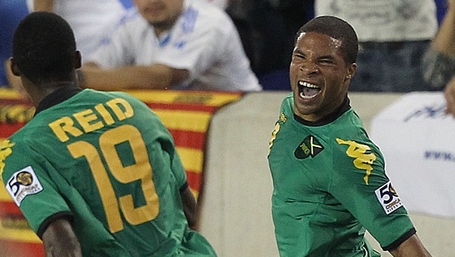 Ryan Johnson had a fantastic week in round 9. Did you have him on your roster? Was he your captain? It would have been a good week to do so, and this during one of the biggest weeks for goals thus far in the MLS season. 27 goals, and what do we really want? MORE GOALS. Perhaps all of our forwards will stop being the dead weight on our rosters of 15. After weeks and weeks of conversation about setting rosters a 5-5-0 or 5-4-1 in order to maximize points, things may begin to turn.. I'm not sure this is true just yet, so don't go throwing all your good money up front before Thursday.

And with this week's performance, Ryan Johnson has become the highest scoring (fantasy-wise) forward, over taking Jack McInerny. It doesn't hurt that he is a smidge cheaper than Jack, and more than a smidge from washed up Bro Wondo. And to think I was going to ditch Ryan last week.. All before the statistical renaissance that took place in my heart.

I'd like to break these posts in to more recognizable sections so they can come to be more predictable and useful for ya'll managers with healthier life priorities than I have. I'm thinking it makes sense to do a few sections: injuries, match ups, quick tips, and investment theory. I'll be counting on my wiser comrades to comment and make sure this is a useful thread. I make no promises to have all the answers, but I will have you know that my investment projections were pretty close to dead on.

Who do we need to worry about this week?

Andrew Jacobson, quite affordable Dallas Midfielder left week 9's match early with an injury. I haven't heard an update yet on whether we can expect him back and earning points.

Futty Danso also went out injured, but you better not have him on your fantasy roster anyway.

Landon Donovan, Robbie Keane, Jose Villarreal, and Carlo Cuddicini (I believe) missed week 9's match up with RSL due to some kind of injury. Will they be back for this weeks game?

Dax McCarty and Luyindola from NYRB are listed as having injuries.

Matteo Ferrari and Nesta from the Impact are out with injuries, and yet Montreal still had a shut out last week.

Deshorn Brown and Edson Buddle are out for Colorado.

While this probably isn't everyone, these are the ones that I think you could make an argument were worth investing in.

The Timbers will be taking on the NE Revolution here at the Jelly. I expect a win, don't you? That being said, the Rev's defense seems to run either very hot or very cold. Two weeks ago, they lost to NYRB 4-1. Last week, they shut out Jack Mack and the Union. I didn't predict that (my b). With the form our Timbers are in, I find it hard to believe they will do it again, and you shouldn't count on players for the Rev when they play against the Timbers. Traitor.

The Crew will host NYRB and this one is tough to call. The Crew have been doing well, but NYRB may be starting to get in to form. I'm betting on the Crew and Dominic Oduro to take this one, but it's a tossup. I think it is safe to say that it's probably not a good idea to bet against the NYRB defense having a terrible night. I'll still be starting Jamison Olave.

The Union will be hosting the Sounders. The Sounders offense has looked very weak and I'd like to hope this will continue, especially with some key forward players still dealing with injuries. You shouldn't have any Seattle players on your roster, but you may think it is the right time to pick up Jack Mack, and you might be right. Actually, go with Amobi Okugo first. I'll get in to the investment reasoning below.

The Earthquakes will host the Impact at their little league field. While the particular dimensions of the field (thinner in width than most) lend themselves to the Punt and Pray strategy of SJ, it will also work to Montreal's Italian defensive style. I'd like to think that the Impact will be up to the challenge. The money is in the Montreal defense, not in Wondo. This won't be the week for him to score a hat trick. Jeb Brovsky is one of the best investments you can make for the money. I'll clarify below.

RSL will host the Whitecaps and I bet they will be out to absolutely dominate in this game after their loss to the LA Galaxy B team. The whitecaps are having trouble finding a rhythm this season, and there is no reason to think they'll figure it out in the Mormon Mecca. I'm thinking I will be starting Nick Rimando as my keeper.

The Rapids will host Toronto in the mile high city this week. While Toronto have looked better than anyone expected, I give this one to the highly injured (yet altitude adjusted) Colorado. Just remember that your best bets for Colorado forwards are injured.

Sporting KC will host Chivas, and absolutely dominate in possession, earn a shut out, and score 3 or more goals. The Timbers earned their victory at the home of one of the toughest teams in MLS, and SKC will want to remind everyone whose house they are in. This would be a good week to have Graham Zusi or Aurelien Collin as your captain.

LA Galaxy will host the Houston Dynamo, and I'm going to go on a limb and say that LA will come away with the result. Is Mike Magee on your roster still? He may earn you some good points this week. And remember that Brad Davis scored himself a red card in the 90th minute or so last week, so don't plan on him helping Houston.

Listen to the new Snoop Lion record, at least once.

This week the Timbers are playing their game Thursday, and so all transfers need to be in by some time before that. Look it up and act accordingly.

Next week the Timbers will be playing two games. Any player crushes you haven't been sure whether or not to indulge? This may be the week to splurge, Mr. Moneybags! Ryan Johnson is now the best bang for the buck of any forward out there (tied with Dominic Oduro). As much as I like Donovan Ricketts, he is not the best keeper investment. Rodney Wallace is listed as a defender for some reason, but even though he is extremely cheap, the numbers still say pass. I'd say it's risky to pick up one of our midfielders, but Valeri might end up being worth your while.. might.

The Chicago Fire, DC United, and FC Dallas are all on a bye week. Oh no! You stacked your back line with Dallas players? It might be time to diversify that back line. As far as keepers go, Troy Perkins is a great value and averages 6.1 points per game. Jeff Parke is a cheap defender option who has been doing well. Or, if you want to make the same mistake and stack your back line with another team, go Montreal and pick up Jeb Brovsky and Hassoun Camara or go SKC and pick up Matt Besler and Aurelien Collin. Montreal is better for your tight budgets, though.

So last week I got on a kick about using statistics to predict points and average risk per player and as a whole team. It comes from CAPM Theory, which you can google if you want to. But you don't have to if you don't want to, because I'm glad to share and turn it in to Fantasy dividends for you. It is good to know how many points a given player averages and how much deviation from the average points to expect. With just that information, you can predict more or less what your XI will earn you points wise from week to week.

If you add in the dynamic of price, you can start to get smart about how to put your dollars to work for you. The best way to do this, I've decided, is to focus on the ratio of average points per round per $1m of cost. It's a simplified use of the Sharpe Ratio, but you don't need to know that. You just need to know that the larger the number, the better. A deep dive in to many players has some key take aways. Pay attention, because you only have $100ish million to spend and this is some wise s#!t I'm about to share with you. Start making your investments in this order and at these minimum values, because the pricing model that MLS utilizes is stupid and you can capitalize on it:

This is why you should pick up Amobi Okugo before Jack McInerney:

You don't even need to know what player costs what to know that you getter better bang for your buck. Can you take both still? Are they above the minimum values listed above for their positions? Yep, go for both if you want.

But I think you should consider taking a look at Ryan Johnson and Dominic Oduro before you jump on the Jack Mack bandwagon. Both have a Sharpe Ratio of .68 - but since their costs are different, I'd recommend you next get a sense of how much money you have to spend, because RJ is more expensive but will get you more points in the long run.

I'm surprised nobody has questioned me on all of this statistics stuff yet, because the past is not a great predictor of the future, right? Here's the quick answer: no models are perfect, some are helpful. I'd say use this one to inform your gut and then go with that thing. If you hate it, that's fine, but look at it first and see how it can help you regardless. Then tell everyone you are psychic and fantasy MLS is an art. I won't care ;)

Alright, that's it for this week. I deserve a medal, or say thank you or something. Actually, just have a conversation about this with me over the course of the week and I will feel like this was time well spent. Happy strategizing to you all!