Share All sharing options for: Green Machine Triumphant; Atticus with the Hat-trick

Despite being pressed all game by the Timbers, Major League Soccer's hottest team, the Green Machine were able to lean on their captain, the hat-trick hero, Atticus. In the final seconds of regulation, and with the score tied at 9-9, Atticus received the ball at midfield and drove toward the Timbers last man, Sebastian Rincon. Seeing his opening, Atticus slipped the ball through Rincon's legs and into the back of the net, sending the crowd of 3000 Green Machine diehards into hysterics as the final whistle blew with the score standing at 10-9 in favor of the Green Machine.

From the first kick of the match it was obvious that both teams were looking to make this a shootout as they pressed the ball and threw men forward into the attack. Atticus was the clear focus of both teams as the Green Machine sought to get the ball to him and the Timbers attempted to shut him down, but the Green Machine forward would not be denied and opened the scoring only moments into the match.

As the match progressed, the Timbers looked to be falling behind with the score at the half 6-4 in favor of the Green Machine. Coach Sean McAuley must have given a stirring speech at the half, however as the Timbers came out on fire. Not even a pair of yellows and subsequent ejection for Timbers' captain Will Johnson could slow down the Timbers comeback. The Green Machine continued pouring in the goals, bagging three more as the half wore on, but the Timbers showed why they have earned a reputation early on this season as a team that refuses to quit.

They say that big players step up in big moments, so it was only fitting today that his teammate should find Atticus breaking in on goal as the final moments of the game slipped away. With the ball at his feet and one man between him and victory, Atticus stepped up and gave the match a perfect finish. 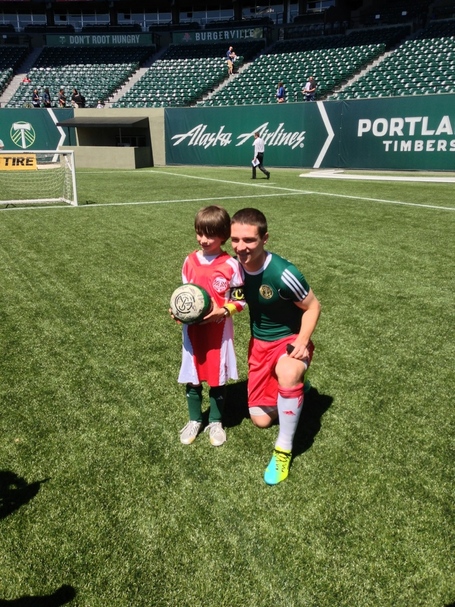 Never been so proud to be part of this organization!! Such a amazing moment for Atticus! To all that made it out you guys are pure class!!

This event for Atticus was the most amazing thing I have ever been a part of. This city & its fans are truly incredible #GMTID #GreenMachine

I have a new hero in #Atticus after today! Portland you are amazing for the support and congrats to the Green Machine #RCTID

What a special day for Atticus,great to see his big smile at Jeld-Wen today

Atticus with the hat-trick. One of 3 players to do that in Jeld-Wen #GMTID

So proud of my club and fans today #TimbersWish #GreenMachine

Well today is one of the most amazing experiences I have had.Anyone who doubts the power of sport should have been with us this morning.

Honored to be a part of such a special day for Atticus. Pure class by our fans and the Timbers organization - day I will never forget! #GMFC

Can't possibly put that experience into words, Atticus is a special kid and a fighter! Thank you so so so much to all who participated.