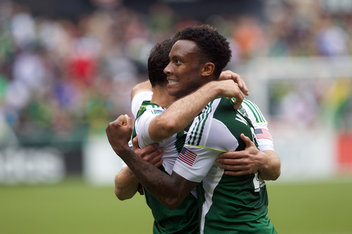 The Rodney Wallace is Good, Get Over it Edition.

And so it was: Rodney Wallace chips a ball over a charging keeper like we all have been begging Darlington Nagbe to do, and then proceeds to make the sexiest assist of the weekend for Diego Valeri to earn an incredible 21 points. I am more than open to claiming that I coined #RWOUT, and I have been very slow to give him credit for just about any of his contributions this season. But, this must end.

Last week, I sucked it up and put him in my fantasy lineup, and it paid great dividends. This week, I've decided to stop wishing he wasn't in the starting XI. Hate leads to the dark side, after all. Have you neglected picking up RodWal for your fantasy lineup? Do it soon before he gets even more expensive.

Sporting KC: Both Aurelien Collin and Oriol Rosell Argerich are out on yellow card accumulations. Matt Besler, Benny Feilhaber, and Paulo Nagamura are all listed as iffy with injuries.

Chivas: Carlos Alvarez and Mario de Luna are both out with yellow card accumulations - not for shoving ball boys.

LA Galaxy: While Todd Dunivant and Robbie Keane are both listed as "iffy", word on the street is they are both going to be back in action this week.

Montreal Impact: Both Davy Arnaud and Alessandro Nesta are still listed as out.

NYRB: Petke seems to think that Dax McCarty is likely to be back this week, although he is still listed as injured.

I'm going to discontinue this section - the thought of doing it stresses me out.

Did you pick up Clint Irwin like I told you? His price keeps going up and he scored 8 points last round.

If Todd Dunivant is coming back this week, he might be a steal at $4.8m.

Both Philadelphia Union and LA Galaxy play two games this week - one of which is vs the other. The clear choice for Union players is a bit easier than the Galaxy, who have been on a suck tear for the past couple of weeks. Dunivant may be a great choice. If you can afford Donovan or Keane, they may be a good pickup as well.

Aurelien Collin will be out this week, but it's not time to cash him in.

Apparently Jack Mack seems to be the thorn in LA's side, and has scored on them on multiple outings. Pretty impressive for a 20 year old to be able to say he has scored on a team on more than one occasion when they only play them once a year...

Mike Magee still averages about 6.2 points a game, though this has been lower in the past couple weeks.. May still be a safer captain choice than Jack Mack.

If you had followed my advice to a T, you may not have scored as highly last week as anticipated. First, many players didn't play the full 90 for both matches and/or flubbed one of their matches. I'm not sure quite how one might account for this statistically, but I was hoping for 130 or so and ended up with 85... very depressing.