Portland Timbers Training Quotes and Notes: The Arrival of Kah

The Timbers got back to work today after their day off with new addition Pa Modou Kah.

Share All sharing options for: Portland Timbers Training Quotes and Notes: The Arrival of Kah

The Portland Timbers trained today at their Beaverton training complex as they prepare for this weekend's Cascadia Cup clash against the Vancouver Whitecaps. Newly signed defender Pa Modou Kah also joined the Timbers for his first practice with the team today.

The Timbers started off with their usual warmups before moving into a tight in game of 5v2 keep away, which they played until practice was closed to the press. Pa Modou Ka looked to be fitting in nicely in the brief glimpse I got of him today as he smiled and joked with Futty Danso and Federic Piquionne during warmups. In the games of keep away, Kah was quick to close down men and rarely stayed in the center long, although the small size of the area the games were played in lent itself to that result. 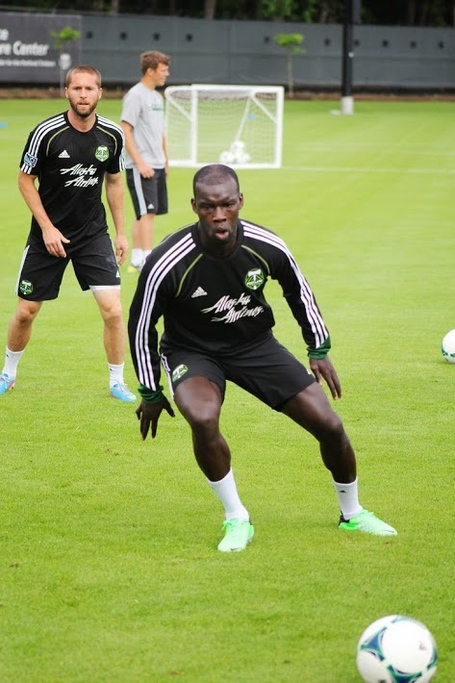 Addressing the press after practice, Kah was humble about his place in the team and complimented his teammates and the city of Portland. When asked if he would be starting against Vancouver, Kah pointed out that the team has been playing well and said he would not demand a starting spot after his first practice.

Ryan Johnson returned to practice today after his absence on Tuesday due to back spasms.

Michael Nanchoff was sidelined again today during practice with a knock. Nanchoff spent the team's warmup period on the side of the pitch stretching and massaging his leg before practice was closed.

Brent Richards made an appearance at practice today riding an exercise bike and taking in training during a break in the pitch. Richards, David Horst, Bright Dike, and Mikael Silvestre are out with long term injuries.

Centerback Rauwshan McKenzie practiced with the Timbers again today. McKenzie is on his second trial of the season with the team as they look for more depth at the centerback position.

David Meves was not with the team today as he played for the Portland Timbers U-23s today in their 2-0 win over the Seattle Sounders U-23s.