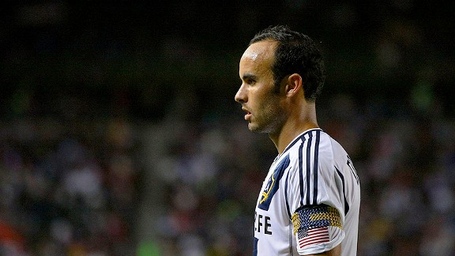 And so it was: my highest scoring week yet this fantasy season. I'm within 4 points of my Stumptown Footy head to head match up, with only one game left in the weekend. Ah, but worry not. The ace in my back pocket has yet to play, while my opponent has already banked all of their points for the weekend. Who is this player you ask? Landon Freaking Donovan. All I need are 4 points, so I settle in to Cinco de Mayo celebrations and let the obvious happen. Four points from Donovan is a cake walk.

I check in on details from time to time from the MLS app when I see that glorious, coveted phrase come across the ticker: penalty kick. And Donovan is lining up to take it. Christmas in May. Like the wedge of lime in my cerveza, how could anything be more perfect?

And then, for the second time this season, in only four (ya you read that right) matches, Landon has wiffed it again. The crowd does not go wild. In an interview after the match, Arena says he will be "looking at his options" for future penalty kicks. That's code for "I might as well have let Lovell Palmer take the PK."

Oh right, and he only earned 3 points for his 90 minute "performance".

Injuries and suspensions a-plenty, I'm afraid. Here are the players I believe worth mentioning for your MLS fantasy purposes:

Hendry Thomas, Deshorn Brown, and Edson Buddle are all still listed as injured, though Deshorn and Buddle both saw time for Colorado last weekend.

Andrew Jacobson and George John are both on the injured list. I swear I read in some news bit in the past week that Jacobson was fine and ready to go, but this report on Big D Soccer (what do you think the D stands for?) speculates on both of them. Either way, Jacobson will be serving out his red card during the first match vs. Portland.

Jack McBean looked like he might end up being a steal at the forward position, til he had a season ending injury. Carlo Cudicini, Landon Donovan, Todd Dunivant, and Robbie Keane are all still listed as injured though two of them played the full 90 for the Galaxy last week.

Davy Arnaud and Alessandro Nesta are both still listed as injured for the Impact. What is the difference between a concussion and concussion-like symptoms?

Dax McCarty is still listed as injured, but someone somewhere said that Dax "might" see time in the 2nd match of the week.

Mikael Silvestre has broken my heart. Did you see this tweet? Classiest Timbers player of all time. If his leg wasn't hurt, and I was female, and going to get married soon, I'd ask him to walk me down the aisle to my groom.

All your messages went straight to my heart .Big thank you !" What doesn't kill you makes you Timbers " #rctid

Alvaro Saborio and Robbie Findley both remain on the injured list for Real Salt Lake.

Steven Lenhart and Alan Gordon will both miss the first of two matches this week for playing "Big D Soccer". See what I did there?

Matt Besler and Benny Feilhaber are on the injured list for Sporting KC. And Paulo Nagamura received a 1 game suspension for not being nice or something.

Did you see Dan Kennedy receive a red card in last weekend's match against Sporting KC? As if Kansas City needed the advantage. The call looked really weak to me.

On a different note: anybody else surprised by all the "what happened to Chivas?" sports articles? The team wins three games right at the beginning of the season while everyone is still ironing out the kinks, and now every sports commentator is surprised that Chivas is falling apart - just like the whole world predicted would happen when we heard about Chelis' half-baked vision/telenovela.

On a week with so many doubles, I can't give thoughts on each match and still consider myself a responsible adult (it's dwindling anyway, as I should have been fast asleep with regular people hours ago). So forgive me this week, and perhaps focus more on stacking your team with eleven players you think will play in two matches this round.

Kei Kamara returns from the EPL to Kansas City and he bought everyone Chipotle. He costs $9.5m, that's $0.4m cheaper than Landon "The Wiff Kid" Donovan for those of you keeping track at home. While he hasn't played a game yet this MLS season, I'd say he is far from rusty.

Columbus Crew, LA Galaxy, Chicago Fire, Philadelphia Union, Vancouver Whitecaps, Chivas, and the Colorado Rapids are the only teams not playing two matches this round. I believe. Start these players sparingly.

With Matt Besler not seeing much practice this week, it may be time to cash in on him and pick up a cheaper defender. Hassoun Camara perhaps? Marcus Holgersson? Rodney Wallace? Chance Myers?

Then, that gives you space for another Kansas City player. Tell me you have 3. Obviously you have 3, right? Oriol Rosell Argerich is a steal. Bite the bullet on Zusi if you havent. Claudio Bieler is alright I guess. Kei Kamara buys people Chipotle.

FC Dallas will be playing both games at home, and they don't lose at home very often. Neither does Kansas City, I hear. Except for that one time the Timbers came.

The SJ Earthquakes will be playing Toronto at home and then playing one of the worst teams in MLS in their fishing village. That team has less points so far this season than Toronto. Less points than Toronto. Less. That said, don't put SJ players on your roster.

With Donovan being a disappointment to everyone, and Robbie Keane still not back to full health and match fitness, Mike Magee will likely be taking the penalty kicks from now on. Ya I know, I said " penalty kicks" - they're not Portland. The Galaxy have been awarded 3 PKs in 8 games.

Clint Irwin is probably the single best investment with a sharpe ratio of 1.33 and average points per game of 6.1.

The LA Galaxy will play two games in week 12, should you want to give Donovan a 3rd opportunity.

Here are two considerations I think got too little attention in the whole position/price/points conversation over the past weeks:

So both of these are important considerations to discuss briefly, and then I'll tell you who my trades were and why you probably shouldn't follow suit on at least one of them - that is unless you like to have fun more than you like to, say, win. Let's use Thierry Henry for our example. The man is super expensive, both in real life and on your fantasy roster. You have $100m to spend on day 1, you need to fill 15 roster spots, and he cost $10.5m. That's over 10% of your total money, right? Huge investment - could you have spent those dollars more wisely to get a better return? Absolutely, and then also, it depends.

If you could field 11 defenders, you should do that. You can't. You can field a maximum of five defenders or five midfielders, but not both. You have to have a keeper in. How do you decide before the games begin?

Based on their expected value.

You should no longer be interested in how much they cost to purchase - you already spent the money. You should be concerned about how many points they will score this round. Deshorn Brown is one of the better investment choices at the forward position with a sharpe ratio of .60. Thierry Henry's is a measly .40.

If we set our lineup based on the sharpe ratio, Deshorn is in.

But before doing so let's take a look at how many points can we expect each to score:

While both score more points than Landon "PK Waster" Donovan, I'd say it's a pretty good bet you'd start Henry if you had to choose between the two.

So how bout those transfers of mine? I ended up making 4 so all of the money could work itself out:

Tristan Bowen was more or a mattress that I stored cash in than a real player, and I think Chelis might agree. I am going to be starting 2 forwards, and Dominic Oduro is only playing one match this week, so I wanted someone who would be playing two. I made a fun choice. Many will tell you it was foolish, and they might be right. While there is nothing keeping him from starting in either match, SKC's coach hasn't actually said what his plans are. But, with only 4 healthy forwards, one of whom (Sapong) has been doing worse than Landon Donovan all season. Sapong wasn't in the starting lineup vs Chivas. I'm excited about my choice - with my luck he'll probably miss a PK.

I'm grumpy about Donovan, and I already have Mike Magee in my midfield (though he is sitting this week for all the other players with two matches). Mike Magee has been worth every penny and he should be on your roster. For 2/3 the price, Jonny Steele was a steal. See what I did there? And, it freed up money to put in to the forward I wanted.

Matt Besler has served me well. Alas, Rod Wall isn't leaving the starting XI for Portland no matter how many times I post lineups without him for Merritt Paulson to share with Porter. These mismarked players are an accounting error in our favor. I'm in, saving myself some more green towards Kamara.

Kennedy received a red card in the game vs SKC, Chivas is only playing one match this week, and Clint Irwin is the best deal in the whole fantasy draft at the moment. And It game me money for Kamara.

Forwards are an expensive, fun, risk! And if you make a spread sheet to calculate all that out, you can apparently do whatever you want!

Good luck this week in your numerous matches! Anxious to see how this round turns out.