Anatomy of a Goal: The Crew Break the Streak

In a new, (hopefully) regular feature on Stumptown Footy, we break down a goal from the Portland Timbers' most recent game.

Share All sharing options for: Anatomy of a Goal: The Crew Break the Streak

We're trying something new here at Stumptown Footy: Anatomy of a Goal, inspired by the video series of the same name on MLSsoccer.com. After every Timbers game, I'll look at a goal from that game, break it down, and try to figure out exactly what happened.

Obviously the hope (and the expectation, given all the goals the Timbers have been scoring) is that most weeks I will get to take a closer look at one of the Timbers' goals and talk about what we did well. Sadly, after Portland lost for only the second time this season and got shut out for only the third, my first goal of the week is going to have to be a goal against the Timbers--the Columbus Crew's lone goal and game-winner from last weekend.

This is a pretty typical set piece goal, and in a multi-goal game, it probably wouldn't be the most interesting one of the bunch. However, it's probably good to have a chance to look at one of these closely, as the Timbers' shoddy defending on set pieces is something I've been harping on for a while.

When I first wrote about the Timbers' struggles with set pieces and dead ball situations, they had just recently let in two set piece goals against Sporting Kansas City, making five of the 11 goals against them goals off set pieces (and one long thrown-in). The Timbers have now conceded three more goals on set pieces and one more on a throw-in. It's worth noting that two of these were direct free kicks, which are kind of a different beast, but that means nine of 17 goals conceded by the Timbers were from dead ball situations. That's about 53%. It's a weakness that has the potential to hurt them; it did last weekend. So let's look at what went wrong.

Things start off badly for the Timbers, because here is what things look like inside the Timbers' 18-yard box before Federico Higuain has even put the ball in play. 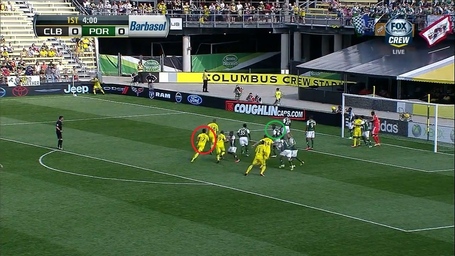 That little red circle is soon-to-be goal-scorer Bernardo Anor. And no one is marking him.

I could pretty much just wrap this thing up right here. Because of course Higuain is going to see his unmarked teammate and know that is his target.

There is no excuse to have a player in the box unmarked before the corner kick has even been taken. And if you happen to be a center back, you should probably not find yourself without a mark when your team is about to defend a corner. That brings me to the green circle, Pa Modou Kah, hanging out in the box, marking no one.

Around Kah, his teammates Andrew Jean-Baptiste, Jack Jewsbury, and Michael Harrington all have marks, who they follow as the play unfolds. Ben Zemanski is on the goal line with Dominic Oduro. All of the Crew players near Kah are accounted for except for Anor. Nagbe is the closest to Anor, but between the two of them is Konrad Warzycha, who will become important in just a few seconds.

Unburdened by the inconvenience of having someone defend him, Anor makes a run to the near post. 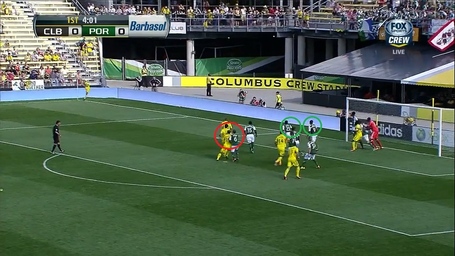 Nagbe, to his credit, seems to see the danger. He's in the red circle, and it's at this point that he looks like he might try to step up to Anor, but the Crew midfielder makes a smart run around Warzycha, who effectively sets a screen for him. Nagbe then drops off. In the green circles, Kah, along with Ryan Johnson and Diego Chara, are all without players to mark, but they're all watching the ball instead of the action unfolding in the box.

It's Johnson who finally realizes the team's mistake and starts to move in toward Anor, but it's too late. 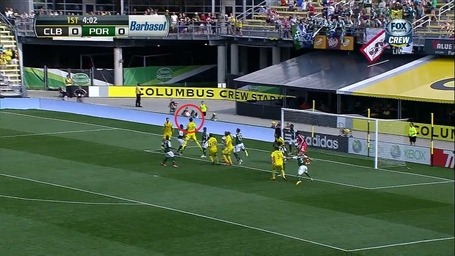 Here's Anor rising up for a completely unchallenged header. And I mean completely. Not a single other player, let alone a defender, has actually left the ground. From there, it's an easy redirection into the net.

This is the same story again and again for the Timbers, going back to the preseason. Guys are are caught losing their marks, watching the ball, and generally sleeping on the job. This one hurts because there was no good reason for it. Unless the team takes a set piece quickly, which the Crew didn't, the defense has a few seconds to get organized. The Timbers need to be taking the few seconds to make sure that every opponent in the box is actually marked and that every man in green is actually awake.